A beloved kayak business was destroyed last weekend when a fire ripped through a Matamata factory.

Emergency services were alerted to the blaze at the business in Firth St about 8.45pm on Saturday.

Viking Kayaks owner, Grant Montague told Jesse Mulligan the business which he established 20 years ago had been completely destroyed. 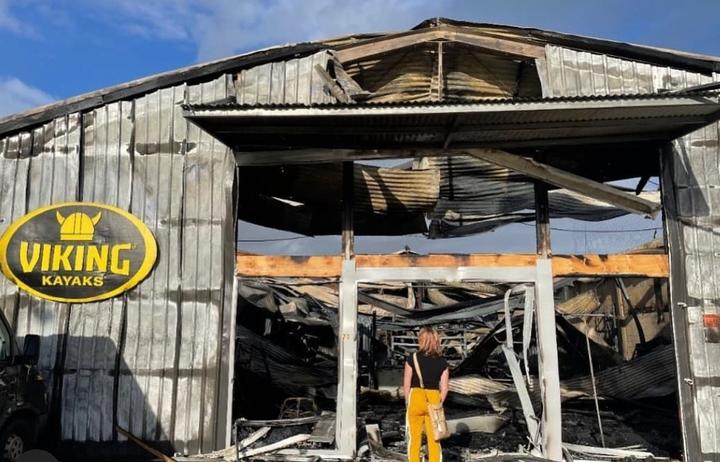 "We've grown over the years from the working in a little shed on the property to 15 staff selling internationally, throughout Europe and the US and all over the place.”

His first great worry was the staff, but local businesses have come to the rescue and taken them on, he says.

“The wonderful thing and the thing that really brought me to tears was the generosity and help from so many people it just blew me away. I couldn't believe it work for all 13 of our employees that was all sorted by day three.”

A givealittle has also been set up here to help the business get back up and running.

“I love the business and I’ve just gotta grit my teeth and do the hard work now to get us back to a place where we're back manufacturing and I've got all my crew back and back to a happy place, which is a lot of his a lot of work between where we're at now and back to there.”

He was having a family barbecue at the weekend when he got a call for the alarm company, he says.

He was there within minutes of that call.

“By the time I got there, the whole place was engulfed.”

The fire was sparked by a fault in the factory switchboard, he says.

“From five minutes it went from the first sniff of smoke to the factory completely engulfed.”

He was surprised and shocked at the swiftness of the spread.

“The whole middle of the factory is empty. And I just couldn't believe how the fire could spread throughout the whole factory and engulf the whole thing in just quite frankly, minutes.

“Anyone listening it's a real wake-up call, man, once that fire takes hold, if you can't get it out, if you're not on site, if there's not a sprinkler system or something. It's gone, you're not going to save it.”

He has lost everything, he says.

"The most important stuff is the ovens that we use, where we put the molds in, and cook the molds, basically melt the plastic inside a tool.

“And so the molds that produce the kayaks, they're made of aluminium. They were all sort of in readiness for the next day's production.

“Aluminium melts at 660 degrees and apparently the fire got hotter than that because pretty much all the molds were molten puddles on the on the floor.”

He does have a business in Australia from where he can bring over one oven and some molds, but he needs a premises in which to manufacture, and in a double blow the business was uninsured.

“Unfortunately, one of my big mistakes was the building that we owned in partnership with another guy, we both thought the other party had taken care of the insurance.

“So, it's all got to come out of our pocket for the clean-up and the rebuild. So, there was heartbreak on heartbreak when the penny dropped on that.”

There is some upside to the terrible situation, he says.

“It could have happened in the spring and we would have lost a lot more stock because we're stocked up heavily for the coming summer and we’d have lost all our summer sales, so it's not the worst time of year for it to happen if it has to happen.