When Lynn Paterson - or Red as she's also known - told people she wanted to kayak around New Zealand, they said she couldn't do it.

Not only that, some said she would die.

But she set off from Takapuna Beach in Auckland on October the 27, 2015, regardless. 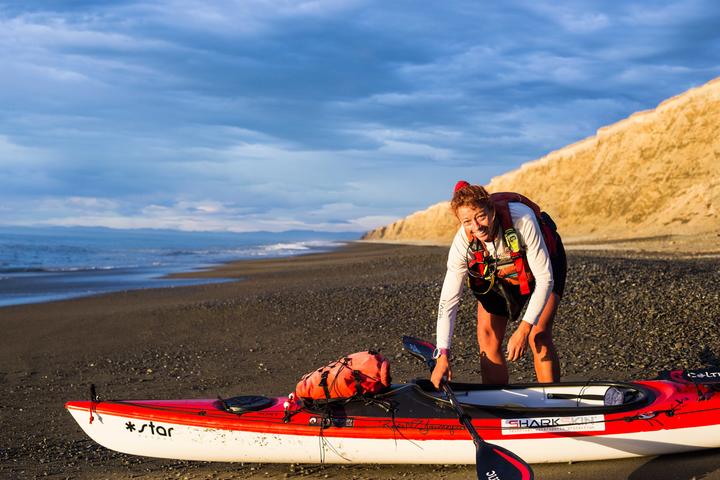 And, while it might have taken longer than expected, Lynn achieved her goal.

“I think my mum would describe me as pig-headed,” she laughs.

“I love being out in nature and doing things that others think are quite mad.”

Paterson says she was a complete novice when it came to kayaking, so there was a lot to learn in the beginning.

“I got sort of hooked into it. I love the water so it was a way of being on the water without having a big power boat. You can see the fish and things come and visit you, it’s a lot easier when you’re not as noisy.

“It started in the Coromandel one summer holiday and I fell in love with it and I thought, why can’t I kayak around New Zealand, it’ll be easier than push-biking – there’s less hills.”

Paterson says her love and respect for the ocean was part of her drive for the journey.

While she had the idea that summer holiday in the Coromandel, it took a few years before she took the plunge and decided to actually do it.

“It became a joke with my mates, they’d say when are you going to kayak around New Zealand and, one year, I looked at everybody – including my partner – and said, I’m kayaking this October.

“I wasn’t turning back. I’d already quietly been training through the year and after announcing it, I couldn’t turn back. It came around really quickly, I don’t remember the winter just before heading away in 2015.”

Paterson says she trained out in West Haven, paddling out to Rangitoto and back.

“I think I probably paddled over 6000 kilometres just training.”

One element of training she called “water torture” – the Eskimo roll, a technique to go under water and roll back upright when you’re hit by a wave.

Paterson says there were many times she was thrown out of the kayak by rough surf.

“Your down at the bottom of the ocean, you can look up and see bubbles and turbulent waves above you and you’re clawing for the surface.”

“I took a detour at the bottom of the South Island because I was determined I had to do Stewart Island as well. Everybody said no, even my mentors said don’t do it.”

Paterson had someone follow her around the country with a campervan so she could get a good rest, however not all areas allowed for access. Stewart Island was done completely solo with just a tent, as was Fiordland where she spent 48 days by herself.

“The weather doesn’t play ball, you have to wait when there’s really big swells and it’s really dangerous out there. You can’t go. I never wanted to be picked up by helicopter from doing something silly or unsafe.”