Nine young Māori filmmakers are to get an opportunity of a life time on Thursday, when they travel overseas to study other Indigenous communities across the world.

The trip is part of a project called Through Our Lens, which selects rising Māori filmmakers and takes them to places where they can see how other communities are going about telling their stories. 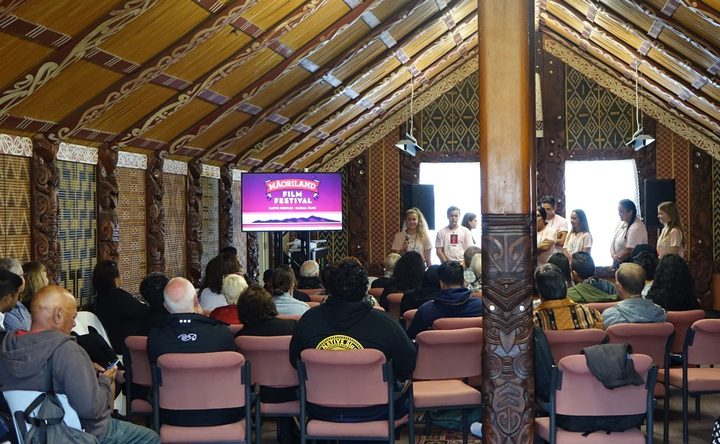 Libby Hakaraia, director of the Māoriland Film Festival, is the leader of the trip and joined Summer Report to discuss the project.

She says the project took flight after Through Our Lens travelled across the country delivering a masterclass on filmmaking to school children.

“We watched these take to the cameras and gear and no amount of passing on our experience in a theoretical way seemed to be hitting any sort of mark, so we got out of the way and watched what they were doing.

“It dawned on us that a lot of our young people who are drawn towards storytelling have grown up in a digital world, so they know more than we do. We gave them the gear, took off the learning wheels and let them go.”

The group applied for some funding from UNESCO and was able to send small groups over to the Pacific to lead workshops with other indigenous youth. They came back from that foray with a batch of films they showed at the film festival.

“That ignited this whole hunger within our youth audiences and their parents and teachers to try and do more. So after a year and a half of finding the support and making those connections, we’re off!”

The first group heads to Taiwan this week and will meet with indigenous communities over 11 days. When that group returns, the next group will go to Helsinki and up into the Arctic Circle.

Hakaraia says that not only is there a genetic link between indigenous Taiwanese and Māori, there’s also a linguistic link.

“This is the thing, we live in the Pacific, we live in the Southern Hemisphere, and the first time I had anything to do with the indigenous Taiwanese was probably about ten years ago when a group came out to Māori Television. I don’t know if it’s embarrassing, but I think it’s rather sad that we don’t make that connection.”

She says when she visited Taiwan’s indigenous communities recently, she found that they knew who the Māori were and had maps on the wall that showed to voyaging and connections between them and Māori.

“They were very much like us. We were going onto what were essentially marae and they were greeting us the way we would greet them if they were coming onto a marae in New Zealand.

“I think it’s wildly exciting for our young people to make those connections and make them in way that’s sharing stories.”

She’s found that the rangatahi Māori who go on these trips keep in touch with the people they meet over there.