Are you out swimming a the moment? It's the weather for it. Even if your local spot faces the open waters of the Cook Strait. We've always loved swimming in Aoteroa, especially for a country where it often carries so much danger.

To trace the lines of that history Emile Donovan talked to commentator, broadcaster and occasional historian John McBeth, who is an authority on Kiwi's going for a dip. 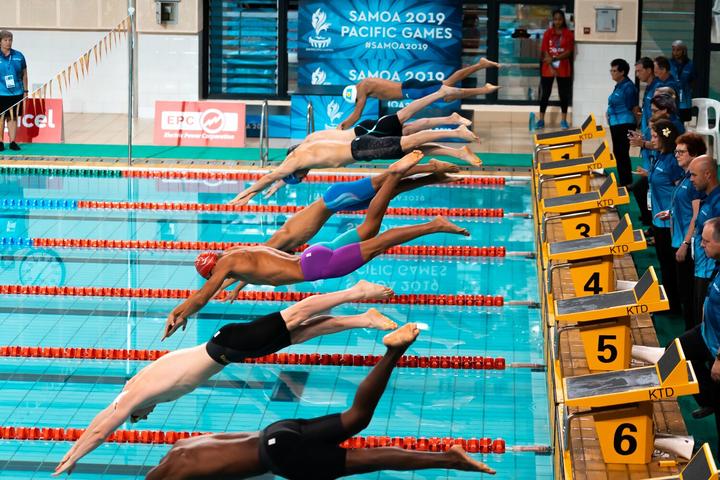 McBeth suspects part of the reason for our love affair with swimming and the sea is to do with our geography. Kiwis are never far from the ocean.

He says that in the early 1900s, the New Zealand Swimming Association approached the government and suggested swimming be part of the education curriculum which led to schools teaching kids how to swim.

“Although it’s not quite as predominant now as a lot of school pools have closed, it certainly is recognised as sport in New Zealand and probably as a necessity in life.”

Through the decades, attitudes toward swimming have changed and the most easily recognisable shift is in the modesty of attire. McBeth says that early on, pools were completely segregated and would be either men or women only.

Mens trunks were much longer and women were required to wear skirts as a part of their swimwear and have a towel covering them at all times outside of the water.

“Modesty prevailed then, modern outfits would be frowned upon. People would be clutching their hearts and falling head-first into the sand if they saw what we see now, but it was a totally different world.”

Despite our nationwide love for swimming and its popularity as a sport, we don’t hold a huge amount of Olympic medals for it. Our only golds went to Danyon Loader in 1996. However, McBeth says we’re always competitive and have a been fourth many times.

“I’ve covered a lot of sport over the years and when I’m asked what are my highlights, Danyon Loader’s two gold medals are right up there. I remember being in Atlanta at the pool and hugging my co-commentator. New Zealanders around us were weeping, openly crying and hugging and displaying the sort of emotion you don’t normally associate with New Zealanders. It certainly is one of the great moments of New Zealand sport.”

A nineteenth century book about New Zealand referred to drowning as the “New Zealand disease” and McBeth says you only need to look at cemeteries in small towns to see how common it was.

“Sadly, there are still too many of them these days - mainly in the ocean. There’s so much education out there, people should not be drowning in New Zealand waters.”