There’s a small town in the UK, just outside of London, that has a street named New Zealand Avenue and a pub on the corner that used to be called ‘The Kiwi.’

During the First World War, this town became a haven for injured New Zealanders, miles and miles away from home.

Walton-on-Thames was the site of Mount Felix Hospital, the first of three hospitals in the UK, specifically for injured Kiwi soldiers. 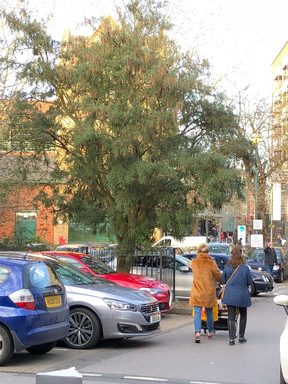 The kowhai tree in Walton on Thames, donated by NZ. Photo: Ellie Jay/RNZ

The hospital no longer exists, the building went out of use after the war and was set on fire in the 1960s, now near the site is a Bunnings warehouse - and in the car park stands a huge kowhai tree, donated by the New Zealand high commission in 1970 with a small plaque at the bottom.

Now the people who live there want to celebrate it and revisit the connection between the town of Walton and New Zealand.

Emily Boulting is the Artistic Director of the Riverhouse Barn Arts Centre in Walton and it was her idea to start the Mount Felix tapestry.

“It’s a story that people really don’t know that much about, there are a lot of place names in Walton that refer to New Zealand, people just walk down them every day and have no idea what the significance of that is, so we thought, we’ll change that!”

What they’ve done is make a tapestry, 603 volunteers in total have spent close to three years stitching a beautiful tapestry that commemorates the hospital and tells stories of New Zealand and the UK during the war.

The tapestry was designed by Scottish artist Andrew Crummy and has 44 panels, each one tells a different story. There’s one showing soldiers leaving New Zealand, the hospital ships at Gallipoli, the nurses on the wards and weddings of Kiwi soldiers and British nurses.

Panel 19 is titled ‘Soldiers buried at St. Mary’s Church and Walton Cemetery,” Carol Lewin, Anne Chipperfield and Hillary Brooks were the main stitchers on this panel and over Christmas we met at the church and they showed me the original drawing from Andrew saying they got involved in the stitching as it was a “lifetime’s opportunity to be involved in something that records the past for the future.” 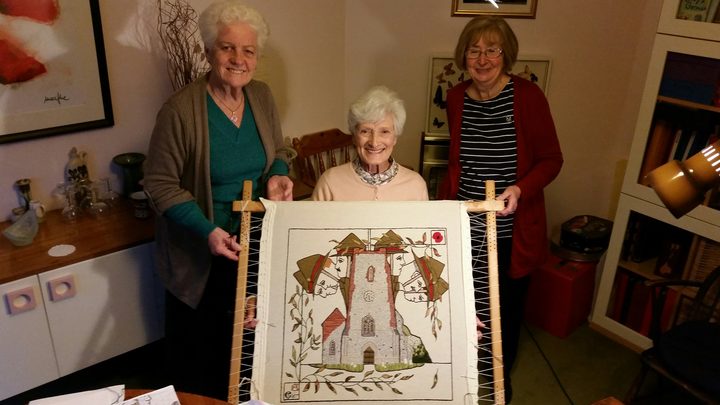 St. Mary’s Church is just off the main high street in Walton-on-Thames and it has a number of visible links to New Zealand, Jonny Blair is one of the Vicars at St. Mary’s and he showed me “a tablet on the wall of the church which lists the names of the New Zealanders who were injured in the first world war, treated in Walton-on-Thames and then buried in the graveyard, there’s a New Zealand flag permanently up on the south wall of the church.” 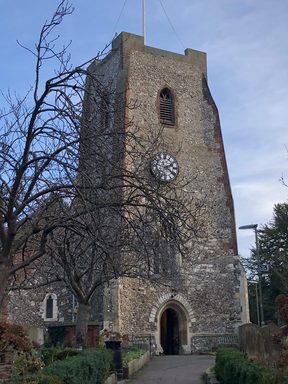 Every year the church holds an ANZAC day service and in the corner of their panel, the ladies have stitched an ANZAC poppy. They tell me that in two corners of each panel square Andrew has left a space for personalisation by the stitchers and they chose to put an ANZAC poppy in their panel.

Hillary puts a spray of the poppies, collected from the New Zealand embassy, up on the tablet on the wall and they’re ANZAC poppies” she says “so they’re different to the English poppy, I always put those up there.” 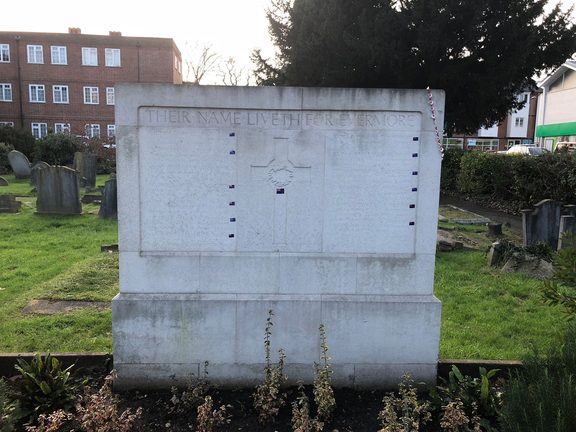 One of two screen wall in Walton on Thames showing the names of soldiers who died at Mt. Felix. Photo: Ellie Jay/RNZ

On one of these walls, there was an anomaly, a soldier who didn’t seem to have a first name, Debbie Ansell wondered why and started to research the elusive ‘Private Taura.’

I found that one soldier didn’t have a first initial” says Debbie “my first thought was there’s something missing, he didn’t have anything, I thought I need to find out why?”

What she found was Private Terakia Taura was from Atiu in the Cook Islands. He was fit and healthy on joining the army but unable to read or write in English. He came across to France and served for a short while before being sent off the battlefield in October 1918 with tonsillitis. 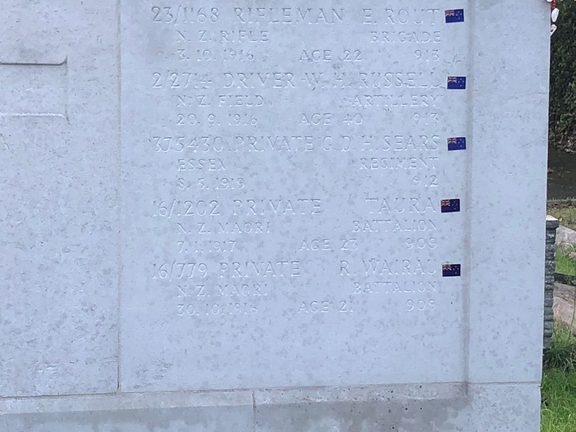 It would have taken months for any correspondence to get to or from the Cook Islands to ask about his condition and Debbie told me his father died a few months after him and that it’s likely he didn’t know what had happened to his son.

Mount Felix in Walton treated 27,000 Kiwis over the course of the war, with only 150 deaths, Sir Thomas Mackenzie wrote that “that small number spoke volumes for the skill of the surgeons and physicians and the care of the nurses.”

One of the nurses at Walton was Edith Popplewell, she features on a few of the tapestry panels.

The New Zealand Women’s association in the UK chose to do a panel featuring Edith at work at Mount Felix, she stands in the foreground in uniform. The red stitching on her sleeves is done with wool brought over to the UK from Wellington.

In the background, you see two other sister and recovering soldiers lying in beds inside one of the wards at Mount Felix.

Jane Thomas and Moya Gibbon are past presidents of the NZWA and they explained that when they were offered the chance to stitch a panel they thought it would be “appropriate to stitch a New Zealand woman because of her amazing courage.”

We see Edith again on another panel about the sinking of the Marquette a transport ship, it’s a bit unclear why the nurses and medical staff were on there in the first place.

In the panel showing the tragedy, you can see Edith Popplewell holding up another nurse whilst surrounded by waves. Another nurse in the top corner is clinging to the neck of a mule to keep afloat as the Marquette slowly sinks down the right-hand side.

There’s a chapel in Christchurch dedicated to the nurses who lost their lives when the Marquette sank, Nicola Lindsay told me one of the panels went all the way to Christchurch from Walton. There it was stitched by a current nurse at Christchurch hospital and other medical staff there added a stitch.

Nicola also said the whole tapestry will be in Christchurch this year on the anniversary of the sinking of the Marquette, when they are hoping to reopen the nurse’s chapel that was badly damaged in the Christchurch earthquake.

The amount of time put into these panels is incredible, the ladies from the church told me they think the stitchers spent a total of 278 hours on their panel alone.

The tapestry will be on its way to New Zealand this year and visiting galleries in the North and South Islands, you can find out more about where it will be here and read more about the individual panels and the history of the tapestry here 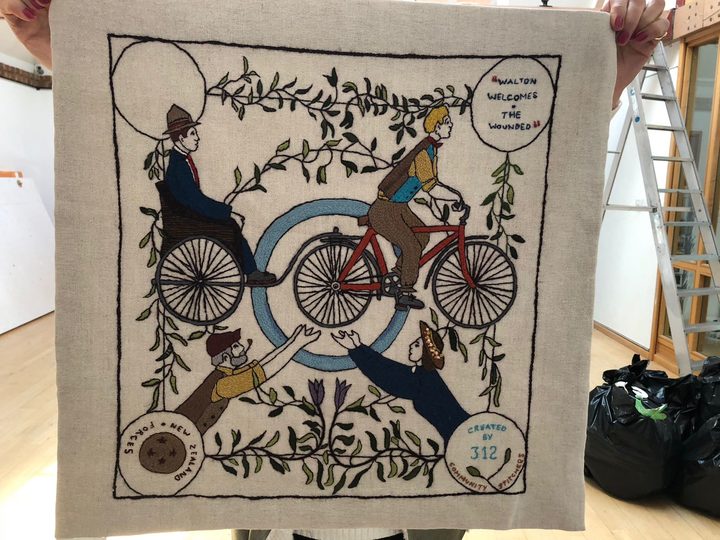