Standing Room Only for Sunday 3 November 2019

12:36  Third Act - an improv programme for the young at heart 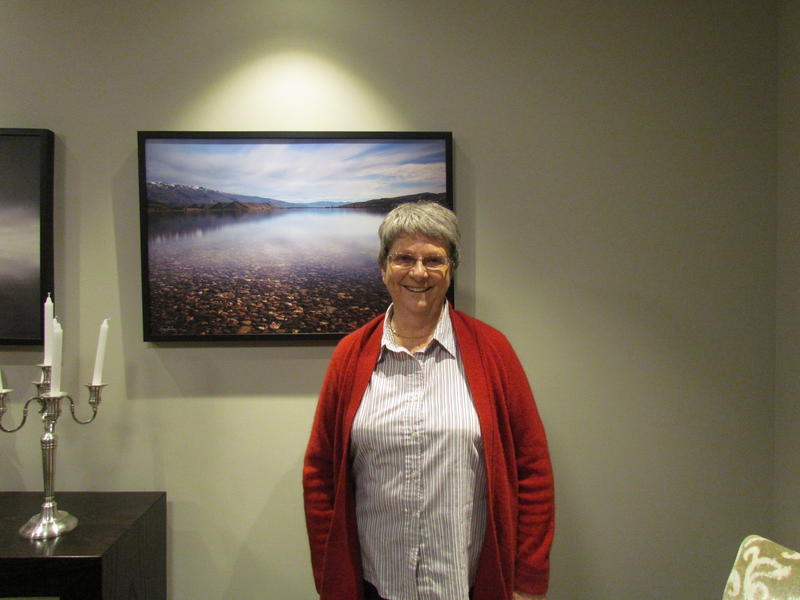 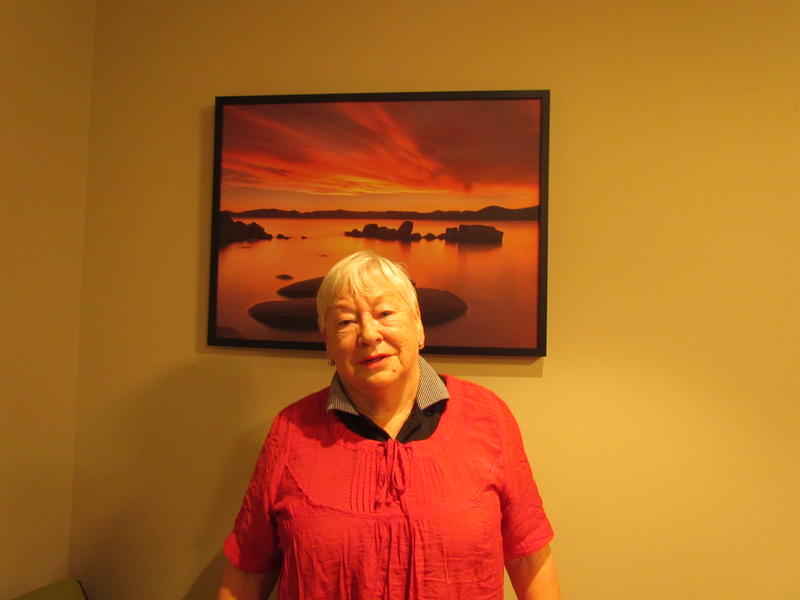 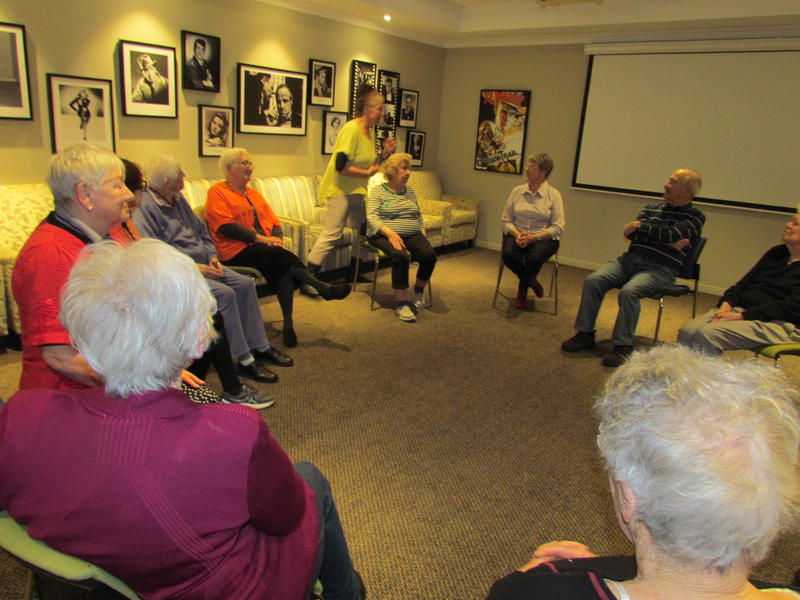 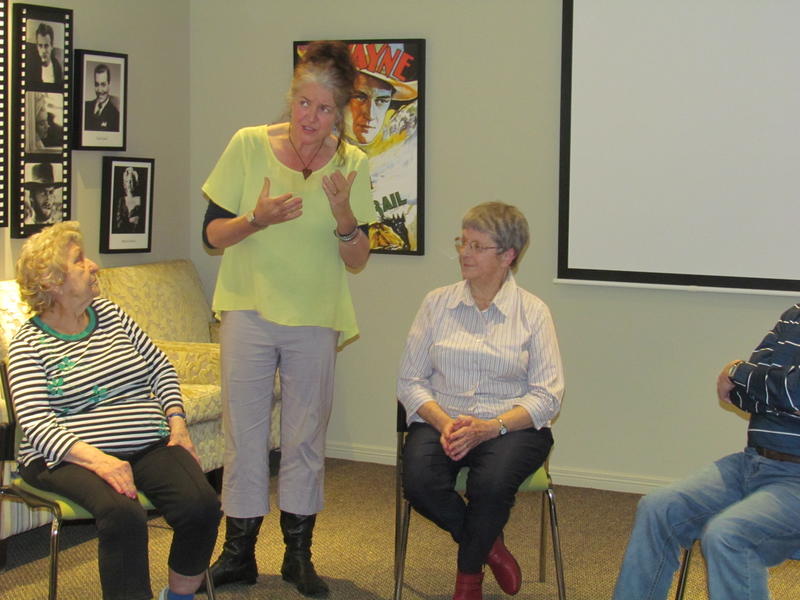 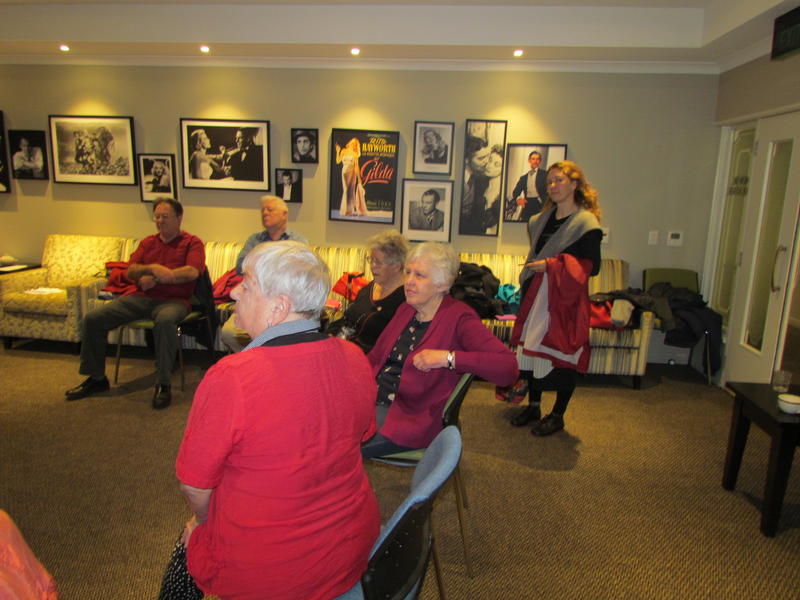 This year residents at three Wellington retirement villages have been piloting a new improv theatre programme.

Voice Arts pitched the idea of the Third Act classes to Ryman Healthcare.  The group works with the elderly to help promote mobility, mental stimulation and sheer joy through improvisation and performances.

Those involved in the programme have already performed for their peers, and there's talk of putting on a show for the public in a future Wellington Fringe Festival.

Lynn Freeman visited Kerryn Palmer and Nicola Pauling from Voice Arts, as well as some of  their keen troupe of improvisors at  the  Bob Scott village in Petone.

This week Simon Morris talks to Joe Letteri, Head of Weta Digital, about the new techniques in photo-real digital animation.  Joe remembers his early years working on films like Jurassic Park, later developing Gollum in Lords of the Rings and Caesar in Planet of the Apes, and currently working on the FOUR sequels to James Cameron's smash hit Avatar. 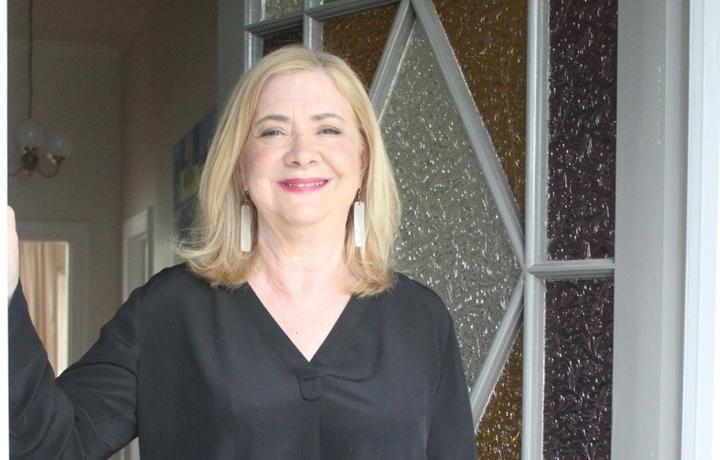 The finalists for the Huawei Mate30 Pro New Zealand Television Awards have been announced - 115 nominations compete in 37 categories.  But the way we view TV is now so spread out - streaming, on demand, on YouTube, as well as old-fashioned linear television - that many of the titles are unfamiliar.

So rather than trying to predict winners and losers, we thought we'd look at some of the highlights of the year - big and small.   Lynn Freeman and Simon Morris invited one of the most respected TV reviewers in the country - Diana Wichtel of the New Zealand Listener - to help pick some personal favourites.

This was the year of Fresh Eggs and Wellington Paranormal, In Dark Places and The Casketeers, The Bad Seed, Mean Mums and Uncharted with Sam Neill. 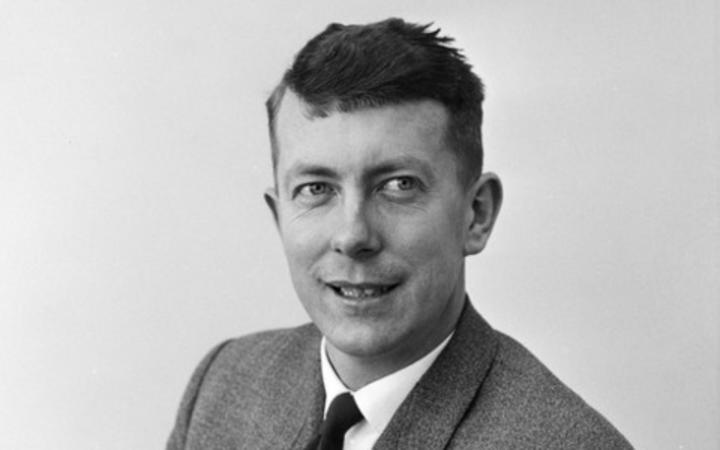 He is remembered for his significant contributions to New Zealand journalism as editor of The Listener, Chairman of the Broadcasting Corporation, and for his first novel, The God Boy - the portrait of a 13 year old boy growing up in post-war small town New Zealand, which gained even more admirers when it was turned into a TV drama.

Ian Cross started his journalism career in 1943 at the Dominion but after the success of The God Boy, he took a break from the newsroom.   He was awarded the first Burns Fellowship at Otago University in 1959, then spent some time in PR and as a radio and television broadcaster before being appointed as editor of The New Zealand Listener in 1973.

He was promoted to chairman of the then New Zealand Broadcasting Corporation from 1977 to 1986, and two years later published a provocative memoir called The Unlikely Bureaucrat.

Lynn Freeman talks with one of Ian Cross's protege's at The Listener, cartoonist, novellist and screenwriter Tom Scott........and with Ian Mune who adapted The God Boy for TV. 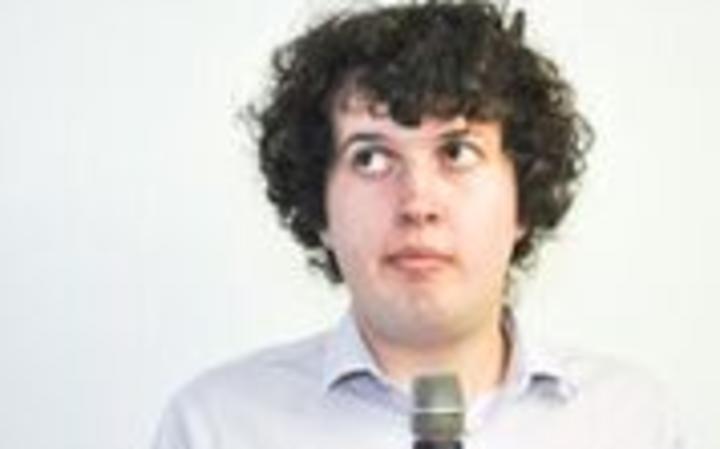 At the end of the comedy year in New Zealand, the nominees are announced for the coveted Billy T award for next year.

These are the 5 hopes for the future of Kiwi comedy, and it has to be said that the track record is pretty good.  Most of the winners go on to - if not fortune, the at least a certain amount of fame.

We're planning to feature some of the latest nominees on the Laugh Track over the next few weeks.  First up - the uniquely dry, awkward and clever Ray O'Leary. 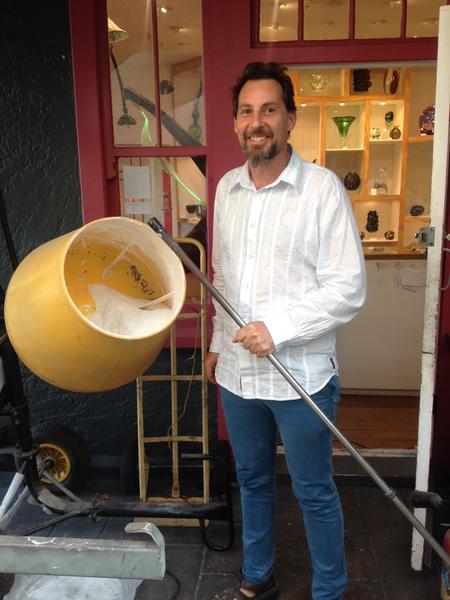 Anthony in his studio with the tools of his trade 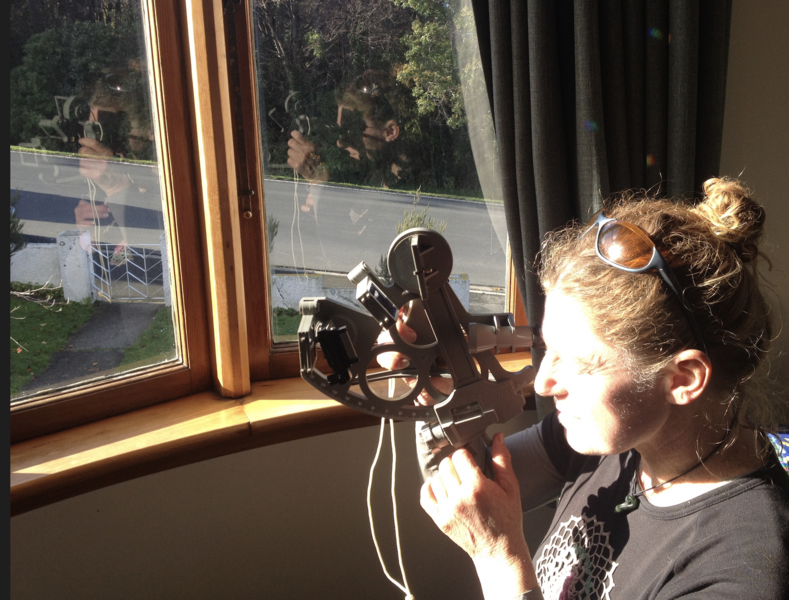 Vicki observing the June 2012 transit of Venus through her sextant 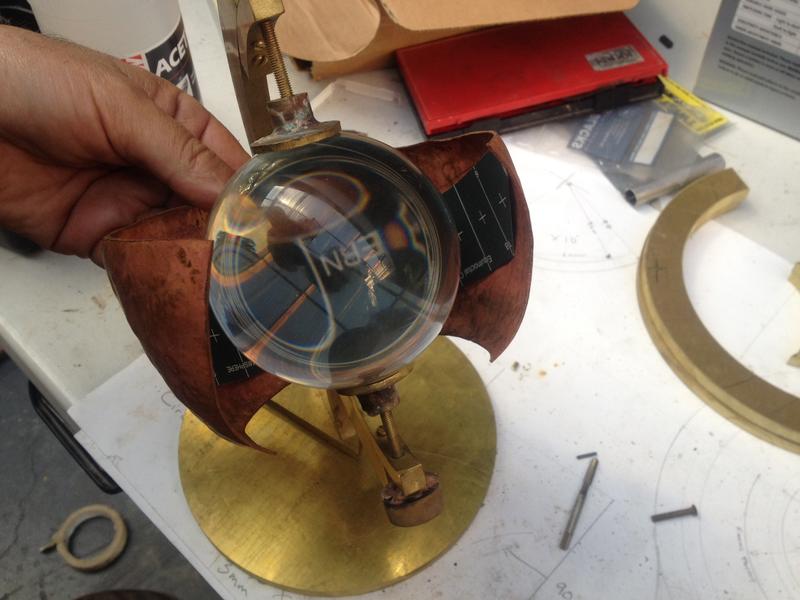 From drawing to object 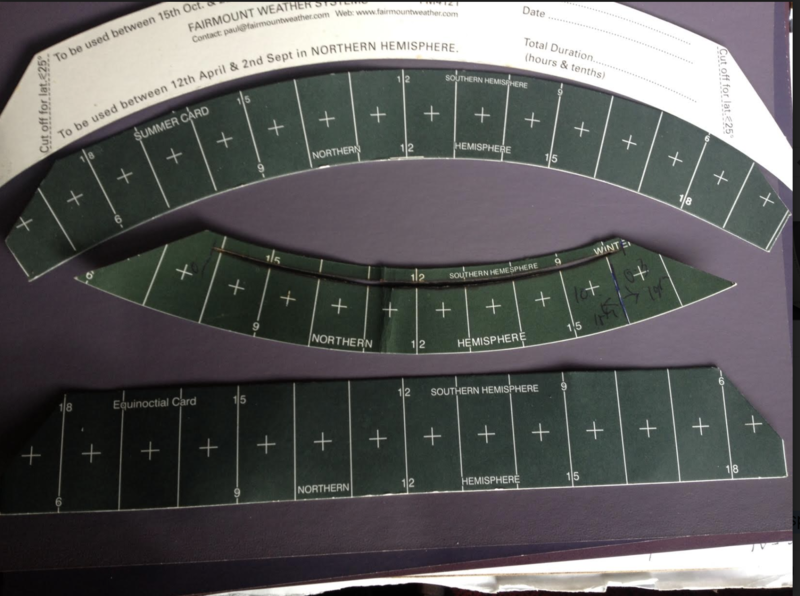 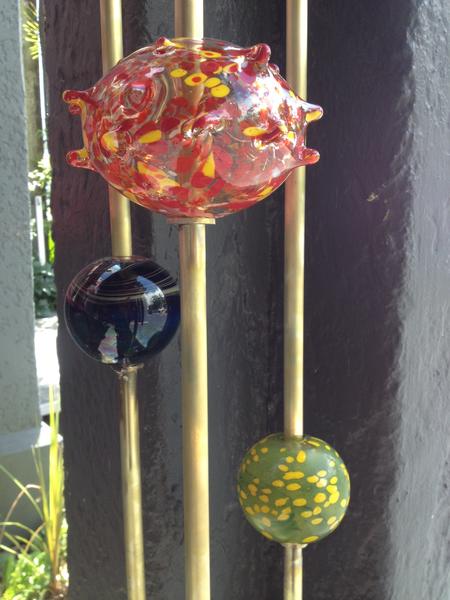 The machine created for the Christchurch Sculpture on the Peninsular opening, Nov 8 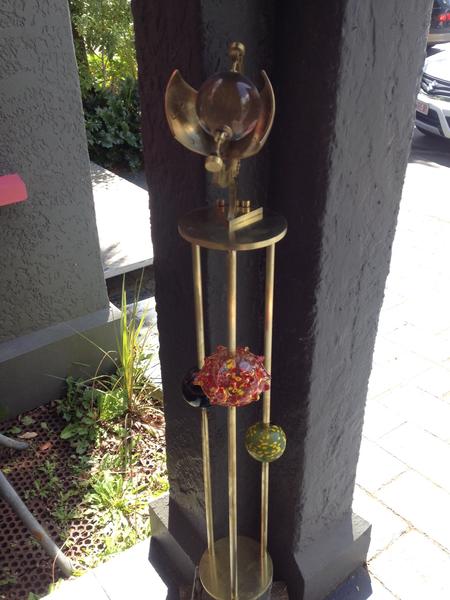 An instrument that records sunshine using a glass orb and cardboard - and made out recycled material including bits of an old boat - is at the heart of a new installation called Burn Time.

It's based on the Victorian-era Campbell Stokes machine that's still used in weather stations around the country, though digital recorders are starting to take its place.

Nelson based artists Vicki Smith and Anthony Genet have created two of their machines to help people understand this basic but effective way of recording sunshine.

But there's also a bigger idea behind it - encouraging people to think about climate change.

Burn Time premieres on Wednesday at the Meridian Mall as guests of the Dunedin Dream Brokerage. 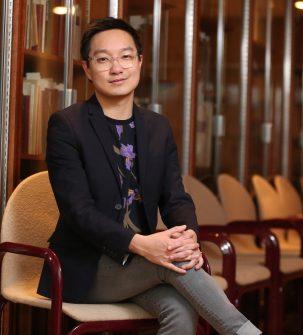 I'm not a religious person but

God sent an angel. One of his least qualified, though. Fluent only in
Lemme get back to you. The angel sounded like me, early twenties,
unpaid interning. Proficient in fetching coffee, sending super
vague emails. It got so bad God personally had to speak to me.
This was annoying because I'm not a religious person. I thought
I'd made this clear to God by reading Harry Potter & not attending
church except for gay weddings. God did not listen to me. God is
not a good listener.

That's from the multi award winning 2017 debut collection by visiting US poet Chen Chen called When I Grow Up I Want to Be a List of Further Possibilities,

The gay Chinese-American writer and teacher has made a list of "Ten Poets Who Will Change the World" and his work has been translated into several languages.  He talks to Lynn Freeman about his life and work.

Chen Chen is talking at  the Verb Festival in Wellington on Saturday at Tu Auaha.  His session's called Further Possibilies. 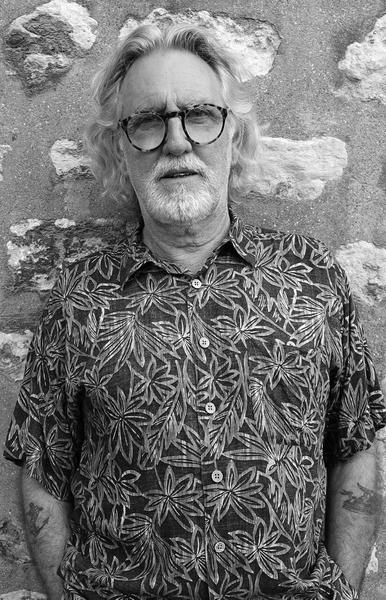 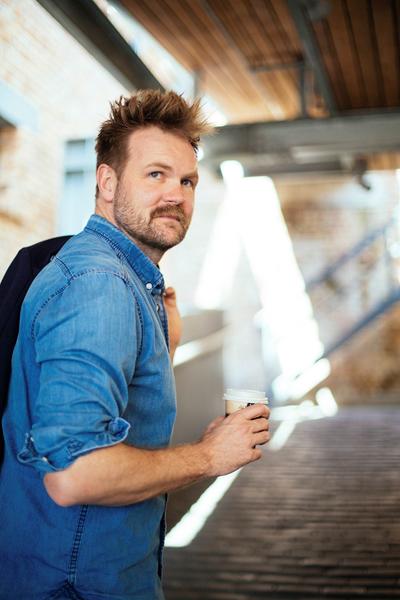 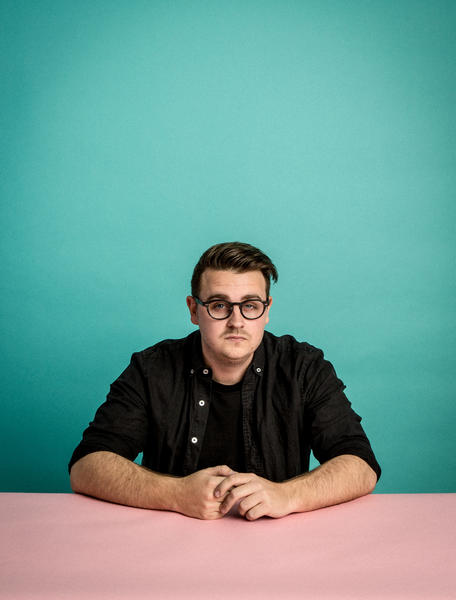 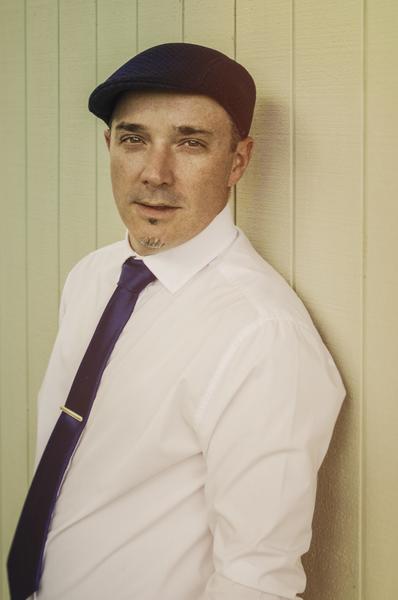 Designing album covers used to be straight forward.  After all, the size of vinyl albums was pretty standard back in the Seventies and Eighties.

These days album cover designs have to work in a far smaller scale - when you're playing tracks on your smart phone, for example.

The three finalists in this year's annual Artisan Awards for Best Album Cover include painter Dick Frizzell who's collaborated with Tim Harper on the cover of the Salvation Army's Offering album, a selection of gospel hymns released in memory of the Christchurch massacre.

Mike Braid's album cover of distorted faces for Villainy's third album Raised in the Dark has secured him a nomination for 2019.

And last year's winner of Best Album Artwork, Jaime Robertson is back again this year for his design for Rhian Sheehan's A Quiet Divide.

The winner will be announced tomorrow at Massey University's School of Music and Creative Media Production in Wellington..

Te Awarua is a stage play which had its debut in Les Quesnoy in France in 2003.

Written by Albert Belz as part of a residency in the town, the play is based on the ties between Les Quesnoy and New Zealand following the liberation of the town 101 years ago tomorrow.

In a trench during the final stages of the Great War, the journey of three people cross paths.

We don’t often get to say this but. . .that play is available to listen again through the RNZ Website.