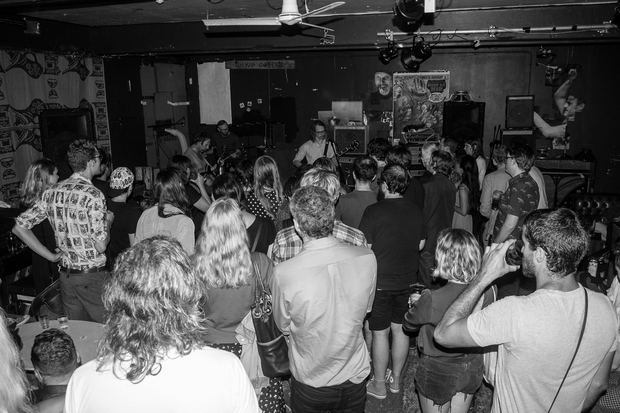 Underneath St Kevin’s Arcade on Karangahape Road, red-lit, grungy and subterranean in feel, the Wine Cellar has been the venue for many musicians' first Auckland show.

I couldn’t have picked a better night to cover it - though a busy night creates its own challenges. The voices of the punters crammed in the service alleyway and queuing at the bar are so loud, I have to try to get interview subjects to walk outside onto the staircase that runs through St Kevin's arcade to get away from the noise. Even there - the reverberant concrete hums with the noise of the crowd, and people come and go between the Wine Cellar and the two flats next door to it.

Before I interview bartender Esther Ma’ake on her break, another staff member leaves her cigarette in a rush and walks back inside when I ask if she might answer some questions on the microphone. Esther tells me she’s had to learn that being too friendly to the patrons at the Wine Cellar can be detrimental to getting the job done.

“If you smile at people then they sit down at the bar, and they stay, and you hear the beginning and the end of their lives…[the staff] are actually just trying to be at work and not be therapists” - Esther Ma’ake

The bill tonight has an unpredictable chemistry to it. The Crabbs, a raucous guitar pop band who were playing at the Wine Cellar nearly ten years ago, are heading a line-up that includes The Muscle and Dad Jokes - two bands that could comfortably play either punk or indie shows and seem to have brought a good portion of tonight’s crowd. The bands are each playing a cover of one of the other band’s songs. The Crabbs have also managed to pull in legendary songwriter and producer Ed Cake and his new live band, a coup which I suspect has helped attract the likes of Steve Abel and Princess Chelsea’s Chelsea Nikkel to the show. However, Streetchant’s Emily Littler tells me she is here by chance - she just needed to get out of the house tonight.  Emily tells me that The Wine Cellar gave her a community after high school.

I come from a social situation where everyone I went to high school with was into hip hop, and I was into indie music and punk music and i remember I went out and I found (the now defunct Eden’s Bar and the Wine Cellar and I thought - this is home” -Emily Littler

There are many musicians in Auckland who identify with the Wine Cellar and take an interest in the bar’s sustainability. I remember four years ago, around the time Rohan first ran in local board elections, there was a rumour the bar would close, followed by a rush of great gigs, perhaps because bands thought it was their last chance. When I ask Rohan about this though, he seems bemused and tells me that most rumours have been just that - except for this year.

“The last year and a half there’s been a very real chance that at least The Whammy Bay would close and we might not have this room for the Wine Cellar.” Rohan Evans

Because of a complicated lease situation, In order to hold onto the back room of the Wine Cellar, the bar has had to also run the club next door - The Whammy Bar. But with a new team, (including long-time Wine Cellar and Whammy staff) having taken over and reformatted Whammy Bar early this year, Rohan is enjoying being able to concentrate on The Wine Cellar and the sound engineering role he loves in the back room. With a new format that has seen most of the old couches disappear, the eleventh year of Wine Cellar may be the year the venue becomes a good place to dance.

“the idea with the layout now is that we have flexible seating that we can pull in if we have an intimate sit down show...the problem with the couches is they take up more space than they seat people, and they created quite an obstacle when people did want to get up and jump around.” Rohan Evans

French For Rabbits Live at the Wine Cellar