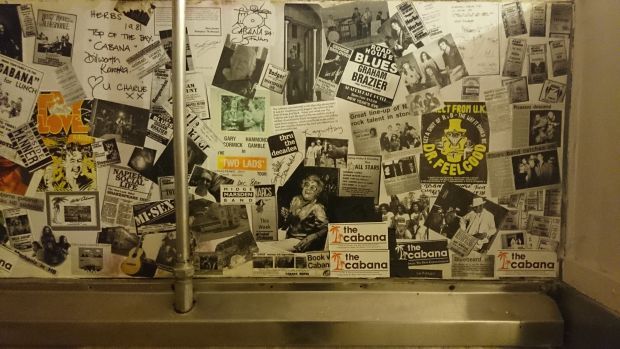 Ephemera in the men’s toilet at The Cabana / photo by Anthonie Tonnon.

The Cabana in Napier hosted Th' Dudes for a four-night stand in 1979, and is one of the few venues from that era that is a live music venue today.

In the 1970s New Zealand rock and pop bands could appear on a circuit of either DB or Lion Brewery pubs around the country, playing dozens of venues on a single tour, and sometimes even playing a run of shows at each venue.

The late Ian Morris, guitarist and songwriter for Th' Dudes, helped reopen the Cabana in 2008. Find out more about this story at The Wireless: The Cabana, on the old circuit and AudioCulture: Rocking the Cabana

For this episode of Stages: The Cabana Radio New Zealand music reporter Anthonie Tonnon visits Napier to talk about the venue - then and now - starting with The Eastern's Adam McGrath.

The Cabana in Napier Photo: Supplied