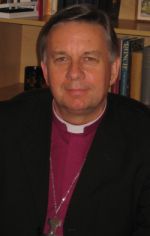 One of New Zealand’s most senior Anglican ministers is taking on a high profile international role. Archbishop David Moxon is heading to Rome as the Anglican Communion’s chief representative to the Roman Catholic Church. He will step down in April as the Archbishop of the New Zealand dioceses, and thus as one of the three leaders of the Anglican Church in New Zealand.  He will also relinquish the role of Bishop of Waikato, a position he has held for two decades.

In Spiritual Outlook this week, Archbishop Moxon sits down with spoken features producer Lisa Thompson to discuss what his new role will entail.