Earlier this year, high profile local and international artists converged on Napier to paint inner city walls with a message about the importance of marine conservation issues. 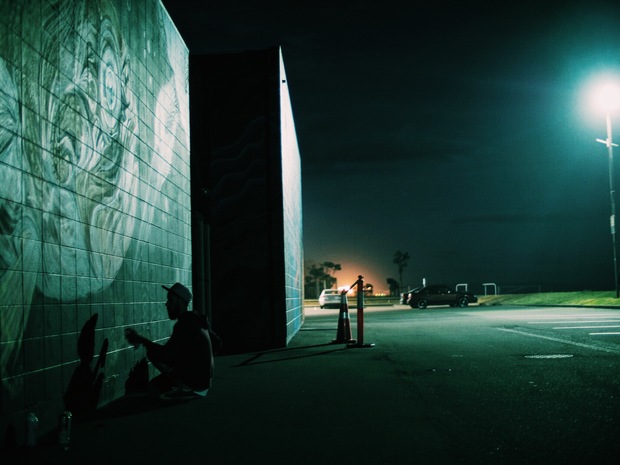 What are we doing to save our oceans and how will consumer waste and overfishing affect our current and future generations?

Tré Packard, the founder of marine conservation organisation Pangeaseed has been looking at ways to spread awareness of rising global issues that affects us all.

One of the projects run by Pangeaseed is Seawalls for Oceans—a five-day event that gives visual artists a platform to promote an important message and unite communities with a ‘pictures speak louder than words’ approach.

The project landed in Napier this March with the assistance of award-winning artist Cinzah Merkens. 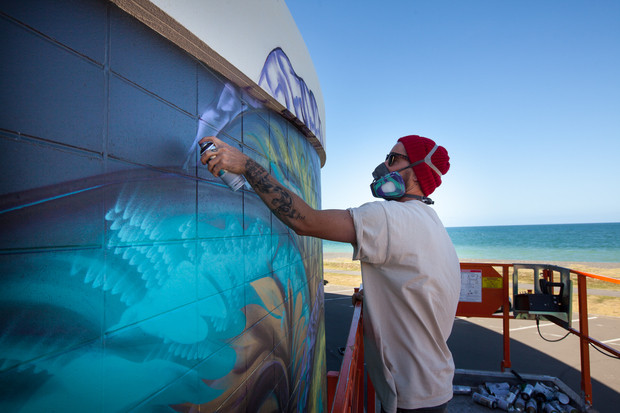 “I’m collaborating with Canadian artist Jason Botkin and I’ve taken out 35-metres of a wall. It’s a big New Zealand long fin eel,which are becoming threatened due to man’s impact on their migratory trails. They breed at one point in their lives [and] they’re amazing creatures who live between 70-100 years old. It’s an amazing opportunity as an artist to be able to have a voice and stand for something bigger than yourself. We’ve got a pretty incredible opportunity to portray a message and when you get given a four storey wall, why the hell not?” 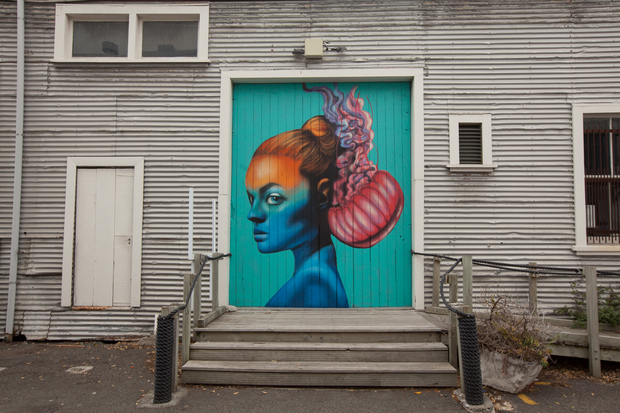 “It’s a very physically demanding task. There’s a lot of hard work, you need to put some blood, sweat, and tears into these walls.  The biggest wall I’ve ever painted was about 120 feet. I’ve been painting since I was a child and it was natural to want to bring my paintings to a larger canvas. I’m really attached to the ocean [and] I live close to the beach living in San Diego, [so marine conservation issues] are something that I feel strongly about.” 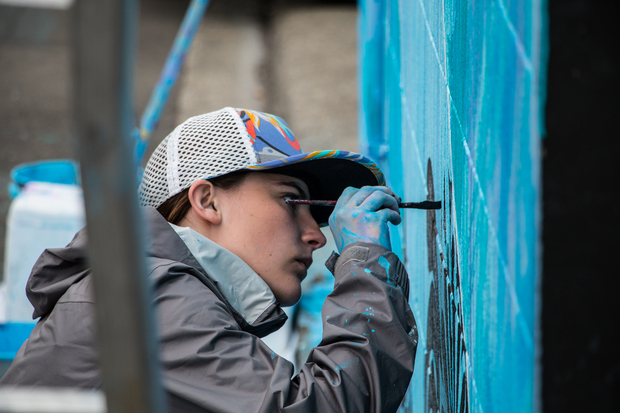 “I come from a family of artists who are also very concerned with the oceans and Pangeaseed merges those two important things. I’m at Dartmouth College where I'm studying studio art and a geography double major, which lends itself perfectly to doing projects like this, because in geography I’m studying the intersection between the environment and social justice.” 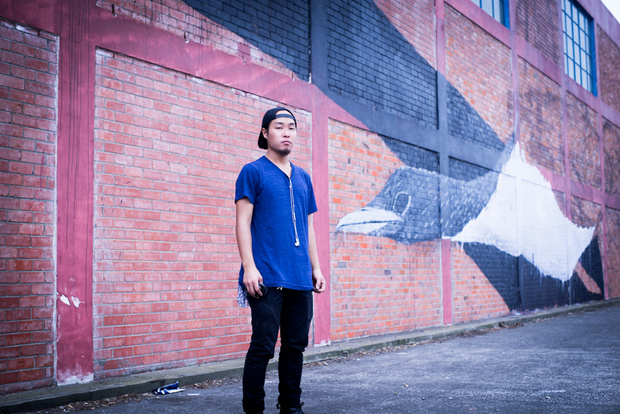 “I’m painting a Chatham Island Shag flying above the ocean. It’s a New Zealand native endangered species. They don’t know the actual reason why they are declining, but it’s pretty hard not to think that humans are one of the causes with over-fishing  and pollution. I get to paint murals in a lot of different places, and I think it speaks much more strongly if I paint something connected to the location where I'm working. My work can be quite dark, but I’m not just painting a pretty picture, that’s for sure.” 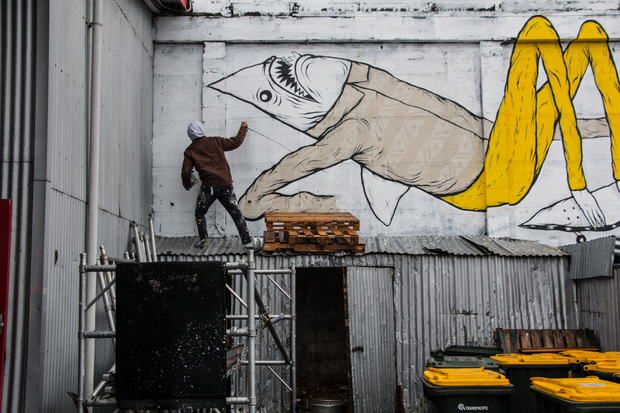 Spencer Keeton Cunningham says millions of sharks are hunted each year for their fins. Photo: Instagrafite

“I have been travelling non-stop for the past two years now. For this wall, I’m focusing on shark finning, which is a very wasteful and inhumane practice. They cut the top and side fins off and throw the body back into the water. It slowly sinks to the bottom of the ocean and drowns. The mainstream media is not going to cover these issues, so when you come together as a group of artists from around the world, you’re trying to create something long lasting that people will understand. “ 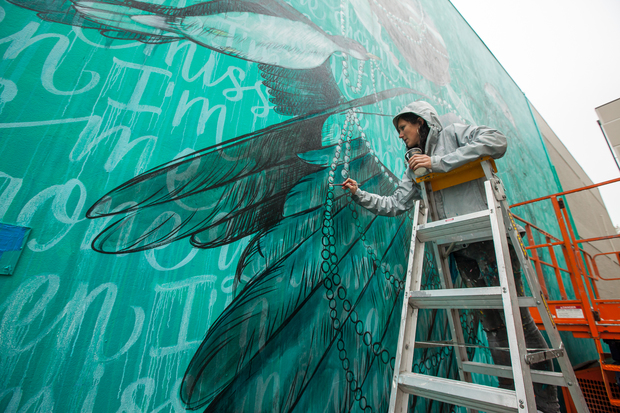 “I feel like street art is becoming recognised now as a global art form, but I still consider many of us to be muralists. This collective of people from  Pangeaseed are really amazing people to experience things. I'm working with Annica and our topic is researching and reflecting on endangered birds of New Zealand, so I'm focusing on the Fairy Tern and the Chatham Island Taiko and we’re talking about a story of loss.”

Annica Lydenberg aka Dirty Bandits (US) 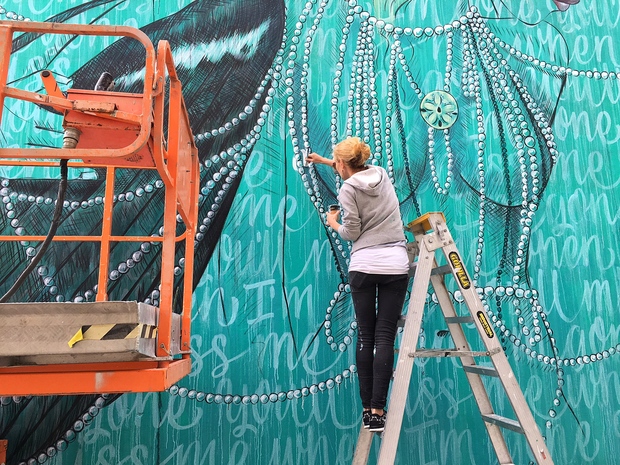 “This is the first time that I’ve worked with Pangeaseed and what appealed to me about this project was the act of being socially conscious and socially responsible in our art. I’m a lettering artist and I’m working with Amanda. The lettering behind the whole piece says, you’ll miss me when I’m gone.” 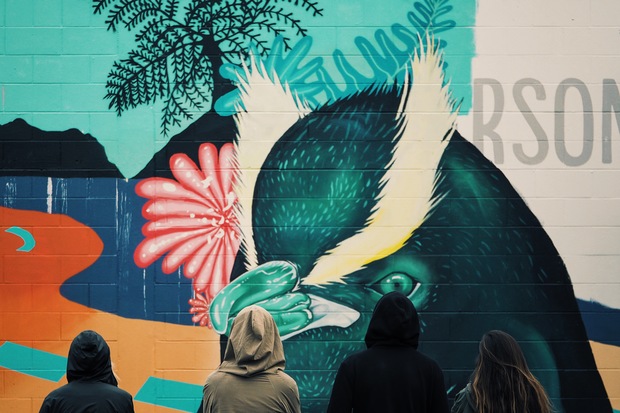 “I feel like I know everyone in the San Diego art scene and it’s cool but it can be quite limiting, so I travel a lot. I make animations, I draw, I paint, I build installations and sculptures. Aaron Glasson and I painted the first sea wall for Pangeaseed three years ago in Sri Lanka. In Sri Lanka they kill Manta Ray’s for their gill plates for Chinese medicine. I love the ocean and I just love animals, so they naturally come into my work. My mural here is about the Fiordland penguins, which only live in New Zealand and within my life time their population has declined from 20,000 to 6,000.” 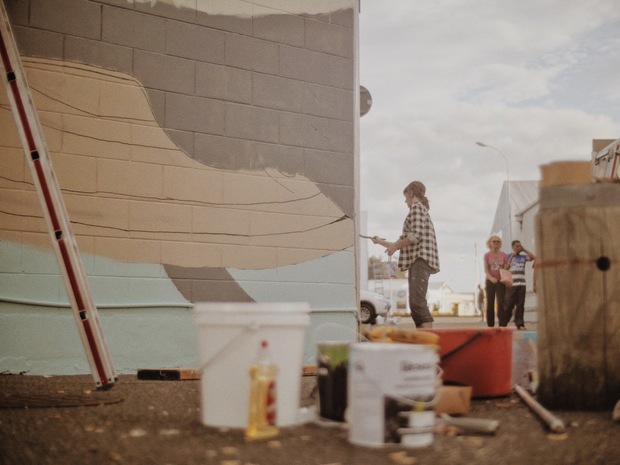 “Normally my forte is drawing and printmaking. I’m quite passionate about conservation and having the opportunity to do something on this scale is really exciting. I’m painting a Bryde’s whale. They reside around Hauraki gulf and get by hit by shipping, which kills them basically.  They swim quite close to the surface which is why they get injured, so that’s why I’ve got him there with the support. ”