It is said to be the site of New Zealand’s first large-scale manufacturing plant.

And for two weeks this summer 15 archaeologists were down on their hands and knees there, trying to unearth more about the former ship building yards at Horeke, in the upper reaches of  the Hokianga Harbour.

Listen to the full story here: 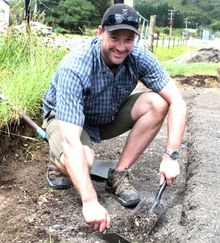 The archaeological ‘dig’ was led by PhD student, New Zealander Matt Carter and was funded  to the tune of $8,000 by La Trobe, the Australian university where he’s studying maritime archaeology.

The shipyard was built in 1826 – 190 years ago – by three Sydney merchants, Raine, Ramsay and Browne, to take advantage of the huge Kauri forests in Northland. The first ship was the 40-tonne schooner ‘Enterprise’ launched in 1827. That was quickly followed by the 140-tonne brigantine ‘New Zealander’ in 1828, and the 400-tonne ‘Sir George Murray’ in 1830.

At its height the yard employed up to 50 English boat builders and an unknown number of local Māori. No Pākehā women lived anywhere near there, and most of the yard’s building supplies and a lot of its food came from Sydney, a week’s sail away in a good wind. But after the Australian merchant owners were bankrupted, the shipyard closed in 1831.

Today Horeke is little more than a few houses lining the waterfront, there’s a B&B, a school, and the old Horeke Hotel, which claims to have been serving beer for 190 years. 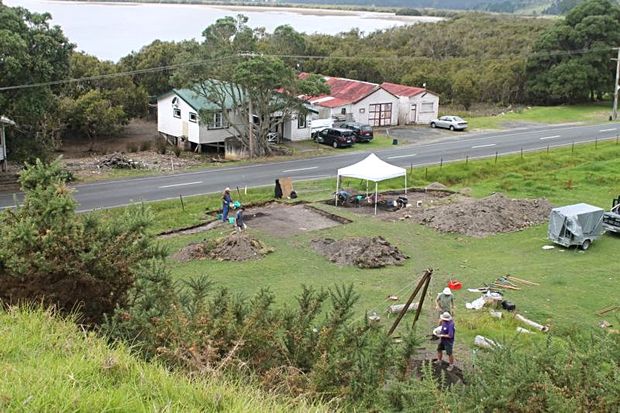 Looking down from the site of the Superintendent's house to the former shipyard site Photo: RNZ David Steemson

Matt Carter enlisted the help of 15 or so colleagues to come and dig at Horeke. That’s what archaeologists do, it seems - they help out a mate. For bed and board at the Horeke Pub, they spent days in the beating summer sun carefully scraping away carefully measured layers of soil… finding and collating  shards of china, home-made musket balls shattered glass from bottles and windows, snapped clay smoking pipes, lots of bones, and one broken copper-alloy keel bolt. 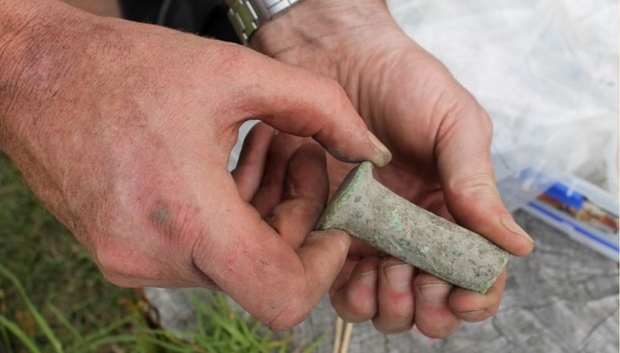 “This is my smoking gun“, says Matt proudly as he gets the  bolt out of his ‘special’ box  and cradles it.

“You can tell the top’s been hammered so I can just see the boat builder whacking it into place, and being disgusted when he breaks it. This bolt would be quite rare and valuable at the time.”

Before any digging started Matt Carter surveyed the entire site with a laser theodolite which located the positions of   all possible artefacts. And before any of the finds can now be removed, their positions have to be marked with little flags and then photographed in situ. Eventually all soil dug out is also carefully sifted  for undiscovered treasures.

At the end of a fortnight the weary diggers can go home, and Matt Carter has about 3,000 artefacts to study for his PhD. That’ll take a bit of time. Meanwhile he also owes a lot of mates a lot of favours! 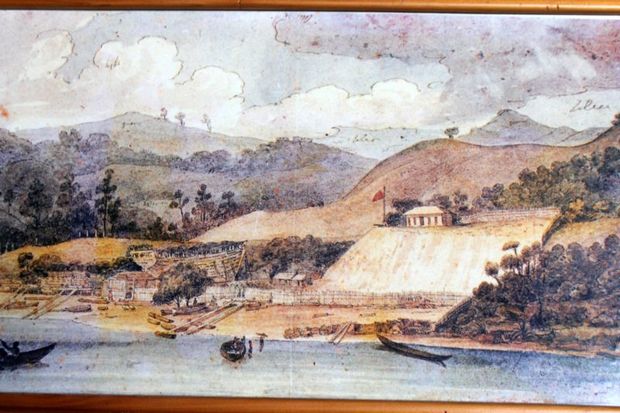 Horeke Shipyard in 1828 by Augustus Earle. Photograph of a print hanging in the Horeke Hotel 2016 Photo: RNZ David Steemson

Soon after the shipyard  closed its superintendent David Clarke was drowned. The yard itself and the last ship built there, the Sir George Murray,  was bought by Thomas  McDonnell ,a  former naval officer. He went to  live in the superintendent’s  house  at Horeke overlooking the yard below, and history tells us he armed  the whole place with seventeen canons. Apparently McDonnell  was a bit of a stirrer , “keeping the Hokianga on the boil” according  to one book, and  referred to as ‘disputatious’ by another. He died  at 75 after falling off a horse.

Of the three businessmen who’d originally set up the yard, Thomas Raine because a successful farmer in Australia and died in 1860.  Gordon Brown continued  trading timber but got into more debt. He fell "prey to religious melancholia" says one book. He was dead by 1841. There's not much to  find about David Ramsay except there is a Maori cloak in a museum in Perth, Scotland that was collected by  him in  in 1842. It’s the only known cloak made entirely of kakapo feathers,11 thousand in total! Hidden amongst them are two red kaka feathers.