"I thought Rawene was a movie set, it was so beautiful, but so poor"; Carol Zambucka 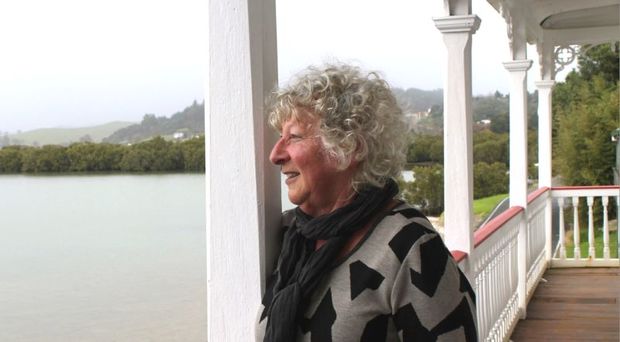 Carol Zambucka has lived in the pretty Northland seaside town of Rawene for over thirty years. Carol grew up in the clothing industry and she came from Auckland to Rawene to start a clothing factory. The factory failed, but she’s lived on in the little town and seems to have thrived.

In 1983 already with a successful clothing factory in Auckland, she came to Rawene for a holiday.

She found  a beautful   place but  with a high unemployment rate, and decided she should start a factory in Rawene to give locals some jobs. Which she did, but the factory was not a success and closed. So Carol has had to reinvent what she does to stay on in Rawene, a place, she says, with a special spirit. 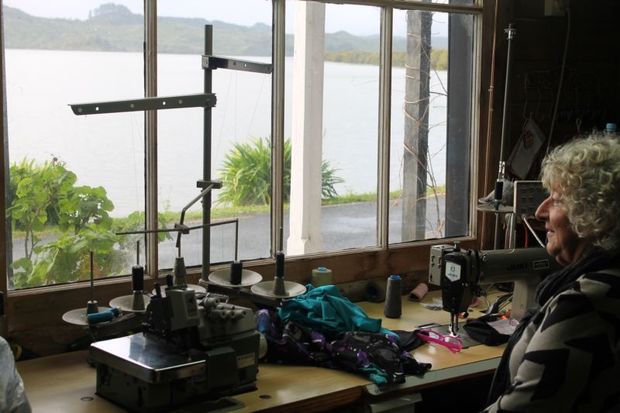 Carol sits at her sewing machine in the window looking on to the harbour Photo: RNZ David Steemson

Carol lives in the Old Lane’s Store building, right on the water’s edge of the Hokianga Harbour. She’s done Devonshire Teas on her balcony looking over the water, and she had an antique shop downstairs for a while. Now she runs a B and B in her house and she still makes bespoke garments, sitting at her machine in front of a magnificent harbour view. Her output includes dozens of wedding dresses over the years and lots of colourful repurposed clothing. She also makes a mean red wine from her own grapes.Her 2013 vintage  goes well with her freshly  baked shortbread.

Rawene started as centre for the timber industry in the north, with a mill and ship yards set up in the   early 1800’s.In January 1827 Captain James Herd bought a big tract of the land there from local Maori on behalf of the New Zealand Company based in London. All for the price of “five muskets, fifty three pounds powder, four pairs blankets, three hundred flints and four musket cartridge boxes”.

For many years the town was known as Herd’s Point. It boasted one of the country’s first post offices and by 1872 had two hotels, several stores, and churches. The census of 1916 had 751-people living in the Rawene riding, excluding Maori. Almost 100 years later, the 2013 census has population at 471, more than half of them, Maori.

Carol says she’s never been afraid of hard work, and that’s what kept her going, doing right by Rawene. She puts some of that down to her Lebanese heritage. “The factory didn’t work out, but in the end I’ve made it.”

You may spy Carol Zambucka next time you’re in Rawene. Now seventy, she has a profusion of white curly hair, and maybe she’ll be selling her colourful, repurposed clothing. Optimistic,  smiling and chatting up a storm. She’s making the best of it for Rawene.