“I was very young in 1966. The exhibition was wonderland” - Scott Milne 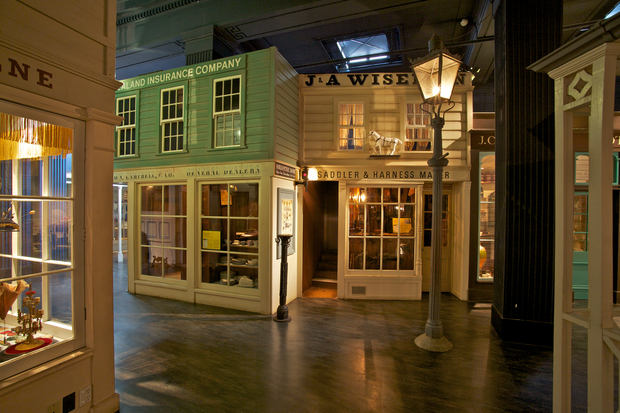 For almost 50 years it’s been a permanent fixture at Auckland Museum. Now “Centennial Street’ also known “Auckland 1866” has closed - but it’s being reborn as a “virtual” street.

The exhibit was built in 1966 to mark the centenary of the then leading department store Milne and Choyce. It featured many of the businesses on Auckland‘s golden shopping mile, Queen Street.

Before it was closed at the museum at the end of September, I visited the exhibition and talked to some members of the family firms who are represented in the street.

Scott Milne is a descendant of the two Milne sisters, Charlotte and Mary Jane, who came from Ireland and started their millinery store in Auckland in 1866. Charlotte married Henry Choyce and the store changed its name. But for unmarried Mary Jane, the business was her life-long passion.

Scott Milne and his cousin Diana Wood remember the day the Centennial Street exhibit was opened in the Milne’s Queen Street store, where it remained for six months.

“It was so exciting”, says Diana.

“I remember running right through the street, after hours “, smiles Scott Milne” I was probably being very naughty.”

Diana and Scott’s fathers, Bob and John Milne dedicated £7000 to spend on this grand and permanent centenary gesture. That’s more than $250,000 in today’s money.

Centennial Street opened in Queen Street in August 1966. Thirty thousand people visited it in the first two weeks. After six months the whole thing was disassembled and installed at the Museum, where it was officially reopened in October 1967.

Eighty-year-old Bruce Wiseman has come tonight, with his son, grandson and family members. They’re descendants of James Wiseman who with his brother started a saddlery in Queen Street in 1863. James had thirteen children, one of whom went on to run a network of successful sports stores.

“There was a queue up the stairs into Centennial Street every weekend”, recalls Marguerite Durley who's been coming here since she was eleven.

Now she’s a volunteer guide and she delights in pointing out one of her “hidden treasures” in the window of Thomas McCready’s shop; a brooch made from the beak of the now extinct native bird, the Huia.

“Māori loved the tail feathers for their hair “, she recounts.

Allison Peirse studied the history of Centennial Street in a thesis for her BA in history at Massey university five years ago. She says the company wanted a permanent exhibit that was academically sound.

In the 1970s Fletcher Holdings bought a controlling share of Milne and Choyce. The Queen Street flagship store went, John Milne resigned and Bob Milne stayed on but only as Chairman. Allison talks about a newspaper headline at the time declaring  “107 years of Family Rule at Milne’s has Ended”.

Scott Milne says the street exhibition reflected  the entrepreneurial spirit and can-do attitude of the Milnes, and the desire to give back.

“The gift was also good for business, because it gave pleasure to the customers”

Scott believes if John and Bob Milne were here today they’d challenge the museum to get today’s businesses to do what the brothers did fifty years ago.