The Heyday of Hay Days

The Clydesdales haul loads of hay to the stackers who go round and round, forking the hay to form the hay stack. Morning smoko sees farmers wives in flour-whitened pinnies bearing baskets of griddle scones; but the hay stack won't be completed before sundown.

Dozens of stationary engines drive bailers and threshing machines, - a reminder that petrol powered the farm before electricity arrived.

On a farm outside Hawera, Spectrum's Jack Perkins mixes with Taranaki cockies who demonstrate skills learned 60 years ago in the heyday of hay days. 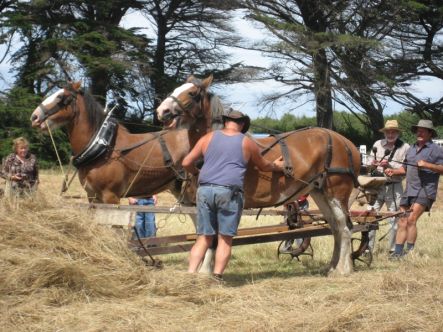