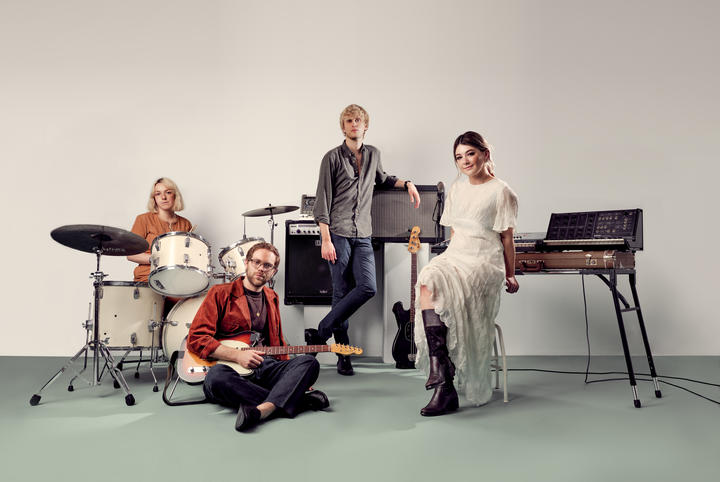 Tennis are Denver based couple Patrick Riley and Alaina Moore. They are - literally - a yacht rock band, sharing a love of sailing, and sometimes writing songs inspired by their time at sea, and in this case they wrote the song while moored in the Sea Of Cortez. Their retro sound nods to the soft rock of the late 70s too, and they do it so well, without being pastiche. Fans of Connan Mockasin should have a listen.

With ‘Runner’ they weave a melody that caught my brain for weeks, and conjured images of being left in the dust by your fast running partner and a kind of mix of outrage and adoration. Of course I’m probably taking it way too literally, as usual. Their album Swimmer is out on Valentine’s day. KJ

Yumi Zouma -  Cool For a Second

I’m fascinated with the idea of a transnational band. Half of Yumi Zouma reside in the northern hemisphere and the other half live in different NZ cities, and yet they’ve still managed to make it work. With their latest singles, 'Cool For a Second' and 'Right Track/Wrong Man', there is a noticeable confidence in their sound. I’m really looking forward to hearing their forthcoming third album Truth or Consequences, due in March. YS

This wasn’t as immediately addictive for me as Agnes Obel’s 2016 hit ‘Familiar’, but repeat listens prove it to be just as musically nourishing. Her trademark pitched vocals (both lower and higher than her actual register), here take the form of disembodied moans and the odd falsetto chirp, woven together into something ominous and beguiling. TS

With a sound familiar to fans of AK79 and Flying Nun bands of the 80s, Guardian Singles Thom Burton (SoccerPractise, Wilberforces) sings songs of urban anxiety, uneasy masculinity, and impending doom with incredible poise, and the rest of the band winds rhythms and harmonies tightly around him. This super-group includes drummer Fiona Campbell (Coolies, Vivian Girls), Peach Milk and Green Grove, so it's no wonder they make it sound so easy.

Thom says that 'Being Alone' is "written from the point of view of twin siblings in an incestuous relationship who escape the cult they've grown up in and reinvent themselves in a nameless city somewhere. They find the urban paranoia and weirdly conservative and isolated nature of the city too much to bear, so their relationship crumbles.In the end, they're deciding whether or not to immolate themselves." And here I was just thinking it was a song about being alone.

He goes on to explain: "NZ society now encourages people to talk and be more open about mental health, yet it functions to exacerbate the problem. Its core capitalist values are competitiveness, colonial ignorance/cultural gaslighting and anaesthetising itself with spectacle. I think we need to be there to listen more as well as saying to people it's okay to talk." KJ

Early last decade this London-based producer/singer/sonic-magpie had been touted as the next big thing in the electronic/beats/r'n'b universe occupied by Blood Orange, Frank Ocean, Jamie XX and James Blake. Unfortunately in 2013 material that was to be Paul’s debut album was stolen and leaked to eager fans. Nothing more was heard from Jai Paul, until 2019 when he officially released the demos and unfinished songs as an album Leaks-04-13 (Bait Ones) alongside two new songs ‘He’ and ‘Don’t You Love Her Now’. He explained that the theft left him on the brink of breakdown and no longer wanting to work on music.

To the relief of fans his new work sees him picking up exactly where he left off, especially ‘He’ where he fully leans into the ghosts of prog rock, and particularly the spirit of Genesis with moody, sassy synth textures and spaced out vocals. It’s an exciting, jagged take at RnB with an added tinge of triumph over adversity. YS

Canadian producer Kaytranada ends his new album Bubba with a track that nods to his Haitian heritage, and sees him teaming up with one of his heroes - Pharrell Williams. It’s an addictive wee boogie that lopes along on a pillowy bottom-end, complemented by Williams’ feel-good lyrical additions. TS

Our Spotify Playlist is here: