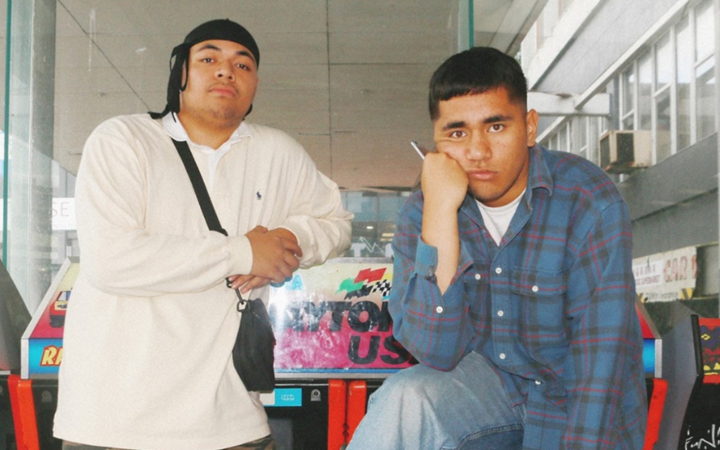 AP and Church from Church and AP Photo: supplied

Jayda G - 'Stanley’s Get Down/No Parking On The DF'

Canadian producer Jayda G makes music reminiscent of New York loft parties, in that late disco-early house time in the late 70s. Think Arthur Russell meets Grace Jones. Here she starts the track playfully taunting us to get off Instagram and out onto the dancefloor, and it’s all the reminder I need to stop scrolling and start breathing. KJ

Not to be confused with Chaii, this Japanese indie four-piece led by twin sisters Mana and Kana is extremely kawaii, with serious musical chops to boot. Taken from their second album Punk (the follow up to 2017’s Pink), ‘Curly Adventure’ is (I think) a song about how humidity affects your hair, set to a feel-good mid-tempo groove that’s precise in all the right ways (the rhythm section of Yuna and Yuki are pretty fearsome) and loose in others (Mana pushes her voice beyond its natural register to endearing effect). It’s all extremely charming, a brand new (to me) musical universe that’s full of smiles. TS

Bank is the latest offering from teenage rap duo Church & AP. The track is a hook-heavy ode to making that paper, littered with classic AP punchlines and carried by a smooth Dera Meelan beat. It comes ahead of the pair’s highly anticipated double EP Cathedral/All Purpose. JB

Caroline Easther - 'I Believe You Tonight'

Caroline Easther has played in defining bands across four decades, including The Chills, The Verlaines and Beat Rhythm Fashion, but has only now made her solo debut, Lucky, and it has all the maturity you might expect.

Though best known as a drummer, it’s the melodies that drive her grown-up love songs, underpinned by achingly lovely chord changes. First track ‘I Believe You Tonight’ sets the standard: a lyric that slows down time to explore a single moment and a slow-motion groove that seems to do the same. Sublime. NB

This 24 year old songwriter puts every genre under the sun into her debut album English Rose: soul, two tone ska, punk, shoegaze, jazz, piano balladry, and rap among the myriad of audible influences. There’s a lot to digest and dissect here, and it’s not always an entirely irritation free experience.

Through it all though is that great powerful voice. She can be a soaring soul belter, and then she’ll dive down to her lower register and make it quite coarse and masculine.

'Fast Cars', one of the singles, is a song about materialism and its trappings, where her singular voice is backed by shimmery electro synths and beats by Luke Gomm. KJ

Weval - 'Are You Even Real'

Weval are ‘two pals from the Netherlands’ who make electronic music, and on their second album The Weight are pushing it in some adventurous directions. ‘Are You Even Real’ is one of many post-Kid A tracks that seem to be using ‘Everything In Its Right Place’ as their jumping off point, adding a good dollop of Board Of Canada’s analogue synth tones and Air’s vocal harmonies to boot. The track keeps reinventing itself, lighter than air one moment, full of gravitas the next. TS