From Toby Morris's Pencilsword column for The Wireless on the theme of inequality Photo: RNZ

Recalling a National Party MP a few years ago who said that the poor need to lift themselves up by their boot-straps, Richard Pamatatau responds “That’s great, if you’ve got boots and straps to lift yourself up by.”

But that’s not always the case.

In his role as Programme Leader for the Graduate Diploma in Pacific Journalism at AUT University, he sees his role as understanding the special complex cultural and familial demands placed on Pasifika students. Not only that, but helping them to work around bureaucratic rules which collide with the expectations placed on them at home. Providing one-on-one support and encouragement.

He’s critical of how large organisations fail to take advantage of the special insights and knowledge belonging to a culturally-diverse workforce. When he was Pacific Issues correspondent for RNZ, he remembers not getting anything about Anzac Day and the Niue population on the hourly news bulletins until a Niuean subeditor was the one making the decision. Because of the life and cultural experience that colleague brought to his work, the significance of the 160 people from Niue who went to the First World War now easily met the threshold for inclusion in a news bulletin.

Pamatatau considers that it’s important to challenge those institutional ways of being, and to confront habits which are Eurocentric, colonised, and often fundamentally racist. In the process, those doing the challenging need to be courageous enough to say ‘I’m not having this.’

He remembers when he was on the Pacific Advisory Panel to the then-Mayor of Auckland Len Brown, “We had this well-meaning person come in and explain that there was a library here for the panel’s use.” Speaking to a group which had among it three PhDs and a former Prime Minister, she was obviously unaware of how patronising her comments seemed. Pamatatau could not believe that they were being spoken to in this manner, and responded “Are you [expletive] kidding me? Don’t ever speak to people like this.” 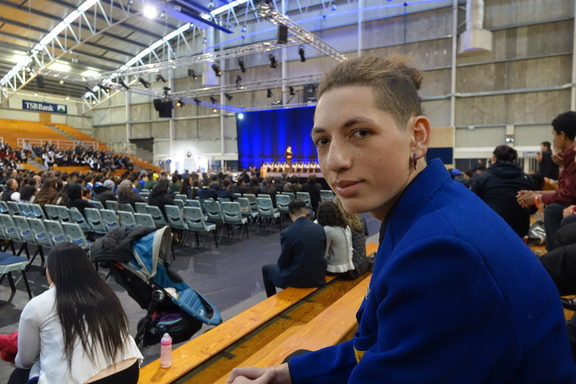 Tawa College student Te Maia McKenzie, 16, said listening to the ideas expressed by other competitors is one of he thrills of Ngā Manu Kōrero. Photo: RNZ / Robin Martin

Given the significance of the media in shaping perceptions, the lawyer Julia Amua Whaipooti is critical of the way in which Māori names are treated in stories about crime and the courts. She feels there are many other stories, less negative, which are ignored. “If you’re going to do a Māori news story,” she suggests, “let’s talk about our kids at [the annual speech competitions] Ngā Manu Kōrero.”

By sharing those stories of success and achievement, she thinks that the intergenerational entrenchment of Māori as a people associated primarily with lawlessness and negative statistics will change.

Tāwhanga Nopera agrees, adding” Do we name every single Pākehā who is in the paper every day as Pākehā? I don’t think so.”

Russell Brown is a broadcaster, journalist and web publisher, and the host of Māori Television’s Media Take. The founder of the Public Address group blog website, Russell is also a member of the Digital Media Trust Board, which oversees the cultural heritage websites NZ On Screen and Audioculture. He has been writing and publishing internet content for 21 years.

Julia Amua Whaipooti (Ngāti Porou) is a Senior Advisor at the Children’s Commission and a spokesperson for Justspeak. She has been involved in the Community Law movement over the past 8 years as a volunteer, advocate, lawyer and National Māori Co-ordinator.

Tāwhanga (Ngāti Whakaue) is an artist in the final stages of the first Kaupapa Māori creative practice PhD in the Faculty of Māori and Indigenous Studies at the University of Waikato. Identifying as transgender, Tāwhanga has sought positive ways to overcome the stigma of discovering he was HIV+ at the age of 22, and has a particular interest in how people are affected badly by the exercise of power.

Richard Pamatatau is Programme Leader for the Graduate Diploma in Pacific Journalism at AUT University. He teaches media law, ethics, identity, writing and public affairs and Pacific reporting. His research interests pivot on how identity, story-telling and truth are mediated by technology.

This programme was recorded in partnership with the Auckland Museum.