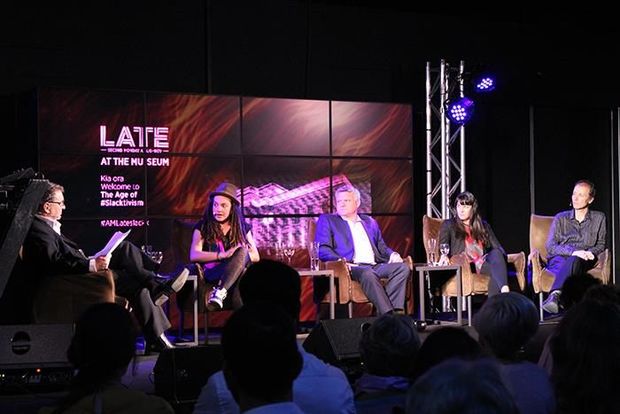 Political protest and general social unrest seem to have moved almost exclusively online in the 21st century. Is this enough? Are politically-flavoured tweets a sign of our lack of engagement or the new face of political and social activism?

In the final Smart Talk from the Auckland Museum, Russell Brown talks with the National Director for ActionStation Marianne Elliott; the author and investigative journalist Nicky Hager; the public affairs strategist and political commentator Matthew Hooton; and Co-Founder and Campaign Director of RockEnrol, Laura O’Connell Rapira.

For wide-ranging talk about the connection between social media and social activism, listen to Smart Talk on Slacktivism at the Auckland Museum.

Cameron Slater not to blame for his influence

According to conservative commentator Matthew Hooton, Cameron Slater is not to blame for the power he once wielded on his Whale Oil website.

If the hypothesis of Nicky Hager’s Dirty Politics is true (and Hooton thinks it is), that journalists spend a lot of their day reading Whale Oil and Kiwiblog and then base some of their stories on it as if they were authoritative sources, he considers that to be the fault of the Press Gallery.

According to Hooton, if a Whale Oil story then shapes coverage on TV3’s lead item “that’s Paddy Gower’s problem, not Cameron Slater’s: He does what he does. It’s those who have taken that seriously who are worthy perhaps of criticism.”

Hooton considers that because Slater was taken seriously by the Press Gallery, the Prime Minister and people in the private sector thought that disseminating stories through the Whale Oil site was a cheap and efficient way to influence the mainstream media.“There’s no doubt it got completely out of hand." He adds "there has been a correction, and journalists will be far more sceptical of what they read there.”

Websites mentioned in this programme include: