Writer Pip Adam discusses her novel Nothing to See - one of the most talked-about books of 2020 - in this highlight of the 2020 Word Christchurch Spring Festival. 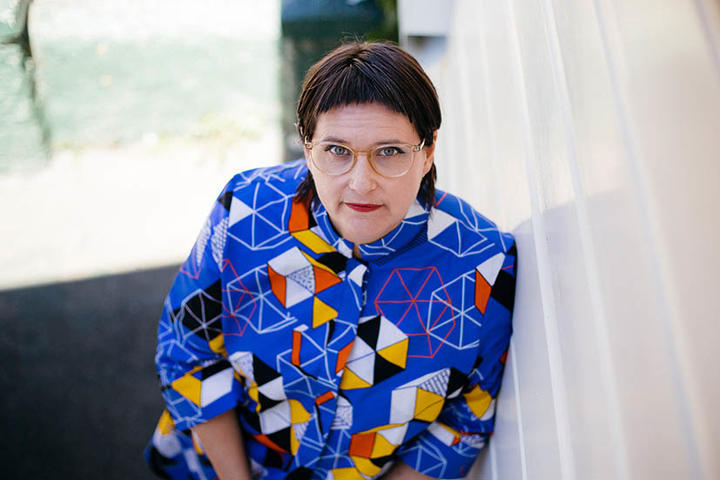 Pip Adam has written one of the most-talked-about novels of 2020, Nothing to See, which follows mysterious doppelgängers Peggy and Greta.

Philip Matthews describes it as ‘a novel about shame, loneliness, about wanting to do good and hoping for second chances’, ‘a real achievement’ that is ‘deeply affecting’ and ‘[pushes] the traditional limits of fiction.’

Adam's previous book, The New Animals, won the 2018 Acorn Foundation Prize, and the judges called it ‘the book with the most blood on the page.’

This is a writer who is, by her own admission, obsessed with structure.

“I really love structure, and I think it comes from hairdressing. When you’re cutting hair, you’re often thinking about shorter pieces supporting longer pieces, and where the pieces disconnect. So when I think about a book, I’m often thinking about it like it’s a shape in space.”

Finding the confidence to believe in her decisions, though, has not always been easy.

Working on what would turn out to be the draft of The New Animals, Adam felt rather lonely and scared, so sought the reassurance of a writers’ group. Their response was not what she had anticipated.“They said this isn’t working, this isn’t working.”

She laughs as she recalls thinking “Right. I don’t think I’m going to show them again. I’m taking my toys and I’m going home.” But her response confirmed to her that she really needed some space to find out who she was as a writer.

“So I went home, where I had very little time, and I complained a lot about it.”

Her friend Laurence Fearnley said to her, ‘Are you going to write it or not?’ And I said, “Well, no one will fund me. I don’t have time.’

“I’m complaining about how no one will fund me!”

So that’s how the novel came to life - in clusters of 500 words a day.

“Not 500 good words. But I think that was the thing. Keeping it moving kept it in my mind. It kept me wanting it. So I kept nibbling it during the day when my subconscious was working on it.”

Pip Adam is the author of three novels: Nothing to See (2020), The New Animals (2017), which won the Acorn Foundation Prize for Fiction, and I’m Working on a Building (2013); and the short story collection Everything We Hoped For (2010), which won the NZSA Hubert Church Best First Book Award for Fiction in 2011. Pip’s work has appeared in literary journals and anthologies in New Zealand and overseas. In 2012 she received an Arts Foundation of New Zealand New Generation Award. Pip facilitates writing workshops in universities and other settings, including with people affected by crime in prisons and communities. She also hosts the Better off Read podcast.

Carl Shuker is the author of the bestseller A Mistake and four other novels: Anti Lebanon, Three Novellas for a Novel, The Lazy Boys, and The Method Actors. He is principal adviser, publications at the Health Quality & Safety Commission and lives in Wellington with his wife, the writer and academic Anna Smaill, and their two children.