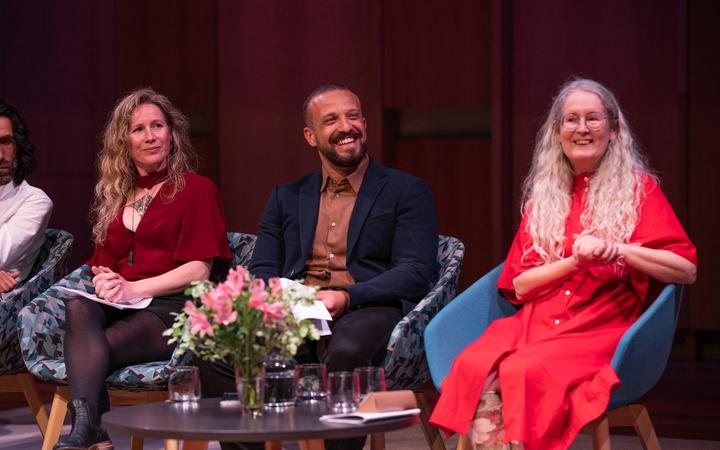 Highlights of the session

Hosted by John Campbell, three distinguished writers read stories created for this event. Their narratives are deeply revealing about the authors’ own lives, but also the state of Aotearoa/NZ. 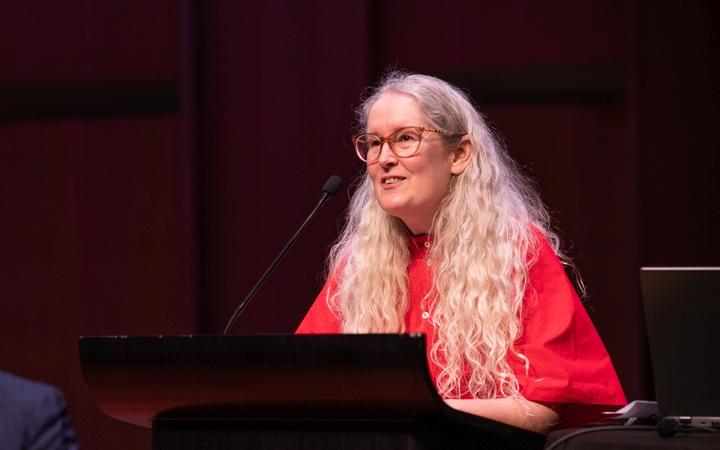 Courage is a thing I find myself saying to young friends discouraged by reversals. When they are talking about confidence. How great it would be to have more. Confidence is the idea we’ve been offered as if life was all first things. I say, “Never mind confidence. It comes and goes. It can’t be summoned. The thing you’ll need, no matter how well you start, or how lucky you are, is courage. Not just for yourself, but to be at all useful, you need courage just to live.”

For the past little while, I’ve been spending time with a friend who has the kind of cancer with bad statistics. Eleven months ago, we’d crouched together on the top terrace of her garden, brushing our fingers through the top leaves of her strawberry plants, feeling for the fruit. Five months ago, she’d be telling me about her treatment, or we’d chat about the district nurse who was changing the dressing on a drain, about Covid, or the National Party’s hot date night out changes of leadership.

Three months sometime into the course of treatment, the course of conversation has slowed. Her words are stepping stones, and some are under water. We reminisce about family picnics in Akatarawa, how we found the stream overflowing, and looking down at the drowned pasture was like looking into another world where the water was shining air. “Are any streams that near pasture now ever that clear?,” she wonders.

Her husband appears with her frothed milk and my coffee, and with both of them in the room, I asked after her father. Her father spoke at my father’s funeral, at my mother’s. My mother visited hers in the months she was dying. She and her husband don’t have kids, but she has this nuggety, active, 96-year-old who remembers training as a pilot in the war, and being kept back to train war pilots while his brother went off on the bombers.

We have a hard time getting him off his childhood, my friend tells me. I’ve only had ten minutes on how he met Mum. It was her Mum and my Dad who met first. Helping another tramper across a swollen river. They just happened to arrive at the bank together.

I’m thinking about the luck, good and bad, that arriving at things together. I’m thinking about constancy. I bear my friend company, but we’re also with my mother and father, my mother and father, their friends, and our cats. Those characters, the long-haired ginger kitten her parents gave mine when Dad was deep in mourning for another cat. Their Burmese, who’d come along on the picnics, and let off her harness, would stalk the cows.

None of this takes courage. I’m no more or less afraid of other people’s suffering than anyone else is. Because isn’t that what scares us most? The suffering of those we love. I just hope around the edges of her hope, with all her friends, for good news about the immunotherapy, for better returns on the chemo. And if it helps with the hope and the hard slog, she can imagine me sitting with her father as often as I’m sitting with her, listening to his stories spooling back to their core of the tea plantation, and the dog called Bongo, and the mother who bolted.

I’ll listen for his best friends my mother and father. For her mother. And for her.

Courage doesn’t come into it. 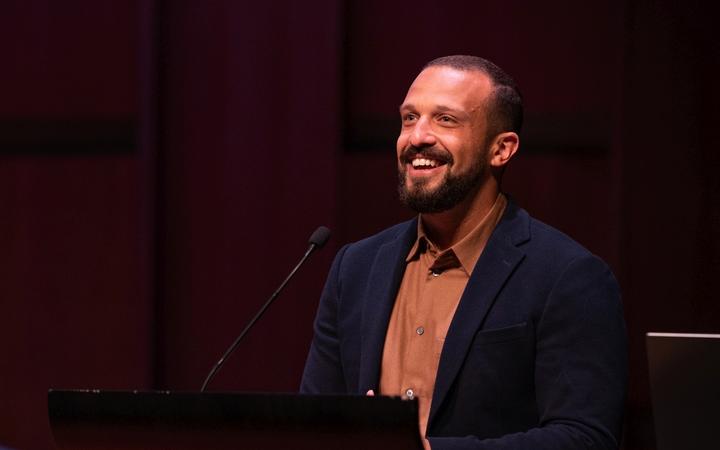 When my Dad first arrived in New Zealand in 1996, he stayed in a spare room belonging to an elderly Egyptian couple for three months. Aunty Nazly was a spritely matriarch, darting in and out of rooms amid conversations, waving her arms wildly and talking to anyone who would enter her house like a long-lost family member.

Her husband was once an air force pilot who fought in the Arab/Israeli war in 1967, but now sat quietly in his armchair, gleefully content with letting his matriarch fill the room. Their home was the sun around which the rest of us migrants revolved around.

On most weekends they would hold big dinners with open doors. Whenever they heard a new family had arrived in the country they would reach out to them to welcome them. Ask them what they need, feed them, hook them up with others in the community who would help. My father, then a 34-year old electrical engineer, found in them a sense of home. A familiar quiet in the chaotic uncertainty of migration…

Mohamed reflects on Aunty Nazly's death, mourned by a large group of those she had gathered around her into a community.

When the grave was filled, our local imam gathered us closer, and told us that what we perceived as a dark hole in the ground was just a portal into another world: one that Aunty Nazly was now traversing alone. Left with the sum of her short life on this earth, and the numerous acts of kindness and connection she had provided for nearly everyone who stood with us that day.

I thought about this community she had built, and I thought about what it had meant for me. The shelter that it provided, and I asked myself what I had offered in return. On the drive back from the cemetery, my brother tells me how strange it is that we have become so desensitised to burials. I tell him it’s a healthy thing, to be comfortable with death, and reflect on the way Islam teaches us to.

But I know what he really means.

Like me, he’s remembering those four days in March last year, here in Christchurch, where we buried 51 people from our community. Like dozens of other Muslims, my brother had flown down from Auckland to help. All of the childhood friends I’d met at gatherings, like the ones at Aunty Nazly’s house, were there. Day by day they drove to the cemetery and donned fluorescent vests to usher the mourners around a surreal sight – 51 holes dug six feet deep. Aligned side by side in five rows.

Over a makeshift speaker system another childhood friend Bilel read out each name, and called the family to come forward. A group of six or seven lifted up the body and walked it a hundred metres through the crowd until it reached its home. The opening passage of the Koran was read out, and then we lined up, heaped a mound of dirt in our hands and gently threw it in. Then my brother motioned people to make way, before Bilel read out another name, and the ceremony began all over again.

From Tuesday until Friday, for five hours at a time, this is all we did.

In the morning we would stand with the bodies laid out in front of us and pray the funeral prayer. On Friday afternoon, as the final body was lowered into the ground, everyone onsite broke down together. A week of levee tears finally allowed to flood.

Maybe it’s a sign of trauma, to connect seemingly disconnected memories. The natural death of an elderly matriarch and the unnatural death of a congregation. But in times of distress our memories tend to collapse on each other. We look for patterns in the chaos to help us make sense. All of my conversations in New Zealand now inevitably return to Christchurch. It is like a glitch in time. 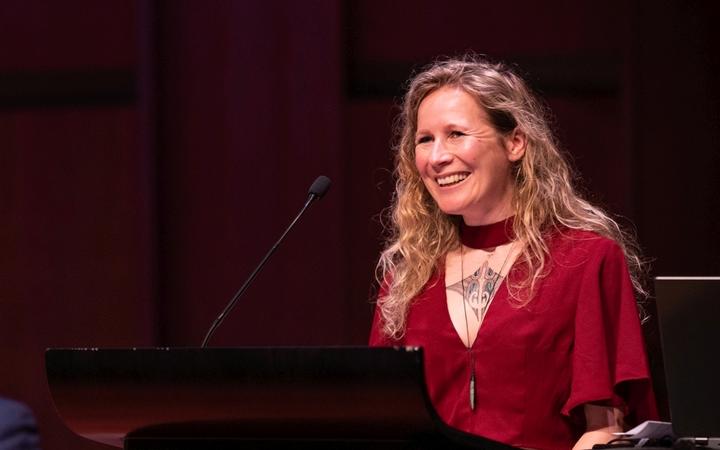 As the writer Becky Manawatu doesn’t consider herself brave, she approaches the theme through remembering a time when she wasn’t. For her, it’s all about mana, experienced in childhood at primary school, then withdrawn when she moved into secondary education.

The night before I was to go to a local high school for a streaming test, I checked my pencil case to make sure I had everything I needed. I remember feeling it was important to get a good night’s sleep, setting the alarm earlier than usual to eat some Weetbix, have a shower and go through the contents of the pencil case once more. Maybe do some of those figure-of-eight things with my thumb, those brain exercises. Remembered a deep certainty I’d do well at the test which would label us. And we all knew what the labels were: we would either be brainy, average or dumb.

Remember arriving at the hall at Buller High hardly ever having been there before. Remember looking at the desks set apart from each other. Remember sitting up in my seat pretty sure I’d do okay. Had a little korero with myself about how I should go slow, take my time on each answer, did not pay attention to the ticking clock.

A wave of anxiety cut through me when and adult in the room said, “Just five minutes left.” Not entirely sure, but my recollection is I was just over half-way through. When time was called I hadn’t completed it, and knew deep down I hadn’t done as well as expected. Had not factored time into the thing, so focused on being careful, forgot also “Be fast, like it’s a race.”

Had me a tangi when I learned my label. My brain function was henceforth, or at least until proved otherwise, to be classed as Average.

Embarrassed to say I did not show up the first day at Buller High with the intention to prove them wrong. I thought, “If they think I’m average, I’ll be average.”

Elizabeth Knox CNZM is the author of thirteen novels, three novellas, and a book of essays. Elizabeth won the Prime Minister’s Award for Fiction, 2019. Her most recent novel The Absolute Book will be published in the US and UK in 2021.

Mohamed Hassan is an award-winning journalist and poet from Auckland and Cairo. He was the 2015 NZ National Poetry Slam Champion and has toured his work internationally, representing New Zealand at the Individual World Poetry Slam in 2016. His poems have been shared widely online, and have been taught in hundreds of schools. In 2017 he was awarded the Gold Trophy at the 2017 NY Radio Awards for his RNZ podcast series Public Enemy, covering Islamophobia and counter-terrorism, and his most recent series The Guest House tackles community grief following the Christchurch attacks. His latest collection of poems National Anthem is published by Dead Bird Books, and explores themes of displacement, nationalism and mental health.

Becky Manawatu (Ngāi Tahu) is a reporter for The News in Westport and was a finalist in the Voyager Media Awards for one of a powerful series of essays she wrote for Newsroom and The Spinoff. Becky’s first novel, Auē, won the 2020 Jann Medlicott Acorn prize for Fiction and MitoQ Best First Book of Fiction. Her short story ‘Abalone’ was longlisted for the 2018 Commonwealth Short Story Prize, and an essay ‘Mother’s Day’ was selected for the Landfall anthology Strong Words.