The Secret Life Of Aotearoa Juggalos 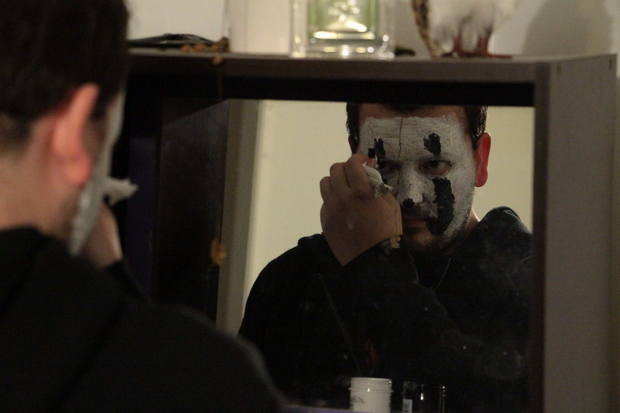 Insane Clown Posse was part of a huge wave of rock/rap groups in the 90s including Slipknot, Korn and Limp Bizkit. Their fans who call themselves Juggalos are one of the strongest and unique music subcultures active today.

Sophie Wilson and Tony Stamp delve into the Secret Life of Aotearoa Juggalos, first by asking them, what is a Juggalo?

Fans have their own idea of what Insane Clown Posse’s afterlife entails, but this vision belongs to a solo mum of two in Kawerau. Shellie makes arts and crafts for the weekend market and identifies as a juggalette. A female super-fan of Insane Clown Posse in a small town of New Zealand illustrates how far the desire for an eternal surrogate family can travel.

The Detroit rap duo Insane Clown Posse was part of a huge wave of rock-rap groups in the ‘90s including Slipknot, Korn and Limp Bizkit. But 23 years on, ICP’s fans have far surpassed the average loyal fanbase of similar acts. Their fans call themselves "juggalos".

Since 1992 ICP have artfully orchestrated a "horrorcore" scene based on the dark carnival, where painting up like wicked clowns and watching bloodletting wrestlers, are seen as life-affirming and therapeutic outlets for the violence of poverty society has placed on them.

This absurd expression has created a steady flurry of bad press, leading ICP to gleefully label their selves as the “Most Hated Band in the World”. But it was in 2002 when ICP really tested their fans’ loyalty.

“When we speak of Shangri-La, what do you think we mean? Truth is we follow God, we’ve always been behind him, the dark carnival is God and may all juggalos find him.”

With these lyrics to “Thy Unveiling”, ICP stepped into the other side of the looking glass, reframing their long-running series of themed albums as biblical parables.

This was a polarising shock to the Juggalo community. What used to be tongue-in-cheek revelry in darkness and vulgarity was floodlit with a new, Christian light. All along, thousands of litres of cheap Faygo soda had not showered, but baptised the masses.

“That was when they dropped the G-Bomb”, in the words of North Shore Juggalo Joe Ramsay.

Although Joe wasn’t entirely impressed at first, he still identifies with the juggalo movement today.

He spent his youth exclusively listening to ICP and their counterparts on ICP’s Psychopathic Records - looking out for their CDs at the Glenfield Sounds music store and downloading them on Napster if they weren’t available.

Today, he’s part of a wider network of individuals who identify as juggalos across New Zealand, through a Facebook page called Juggalo Aotearoa.

Recent stories from The Secret Life Of