Navigation for The Secret Life Of

The Secret Life of the Musical Saw

Karl Steven investigates the world of the musical saw and digs out a couple of bona fide New Zealand saw players. Auckland retiree Alan Pitts shares the story of how his 10 bob saw from a tool shop took him around the world making music. Alan's near century of sawing began with being captivated by the sound of the saw on the radio in the late Thirties, lead to becoming world champion (twice) in the Nineties, and he still hasn't hung up his saw. Marton resident David Maas not only plays musical saws, but designs, builds, and exports his 'soprano' saws to players around the globe. He tells his story, shares his passion for the musical saw, gives us a demonstration of his soprano model, and explains how it all works.

We also take quick look at the history of the saw both as a cutting tool and as a musical instrument, digress into other instruments that produce similar sounds in different ways like the theremin and ondes martenot, and get the chance to listen to more saw music than you've ever heard in your life! 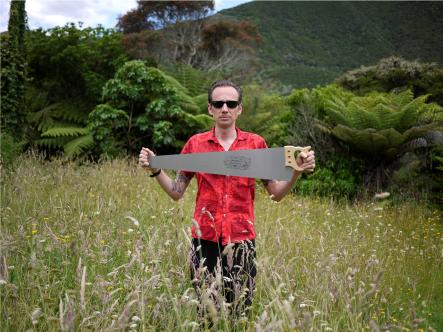