Joan Wiffen and her Dinosaurs

“Her story is a wonderful example of the intense interest, drive and energy that motivate many natural historians – amateur and professional scientists alike – and the simple joy of discovery that has led to all the great scientific discoveries throughout history.”

This is how GNS Science and Victoria University palaeontologist James Crampton describes Joan Wiffen, perhaps best known as New Zealand’s dinosaur lady, who passed away five years ago this month. 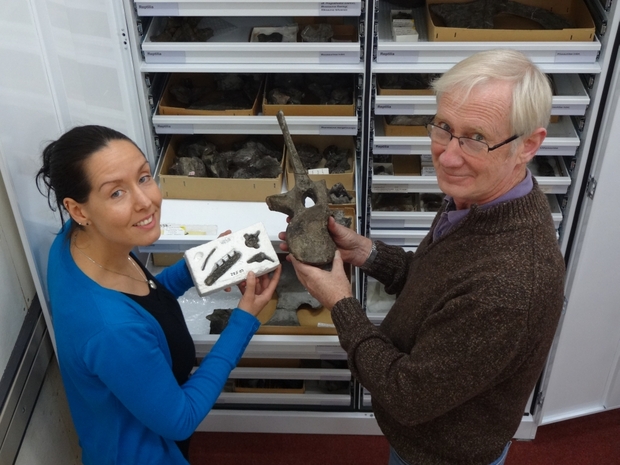 Palaeontologists Marianna Terezow and John Simes with some of Joan Wiffen's fossil discoveries. Marianna is holding a fragment of the jaw, a rib and two tail vertebrae from a juvenile mosasaur Moanasaurus mangahouangae, and John shows an incomplete back vertebra of an elasmosaur. (image: James Crampton)

During the 1980s, Joan unearthed the first fossil of a land-dwelling dinosaur, a discovery that would rewrite New Zealand’s natural and geological history. Back then, it was thought that only marine reptiles existed in New Zealand during the Cretaceous period, but Joan’s work delivered the first evidence of terrestrial dinosaurs.

Joan was entirely self-taught and her introduction to palaeontology was accidental – she attended a night class in place of her husband Pont who was unwell and couldn’t go. Equipped only with a map from a petroleum company that noted “saurian bones” in the Te Hoe Valley, inland Hawke’s Bay, Joan and her family went on to discover fossils of several types of land dinosaur, as well as those of marine and flying reptiles (pterosaurs), including the paddle from a juvenile plesiosaur pictured on the left (image: Veronika Meduna).

Joan’s dig at the Maungahouanga Stream and the beds of other streams in the area still hold fossil treasures today. During a fossil-hunting fieldtrip to explore the area, now partly owned by the Forest Lifeforce Restoration Trust, James Crampton and fellow GNS Science palaeontologist John Simes discovered fossil teeth, bones of mosasaurs and a giant dinosaur-era ammonite.

In this feature, Veronika Meduna visits Joan Wiffen’s fossil-hunting grounds and the huts her family and team of fellow palaeontologists built to allow them to work on the fossil-holding rocks. She then goes on a guided tour of the National Palaeontological Collection, where Joan Wiffen's fossil discoveries are held. 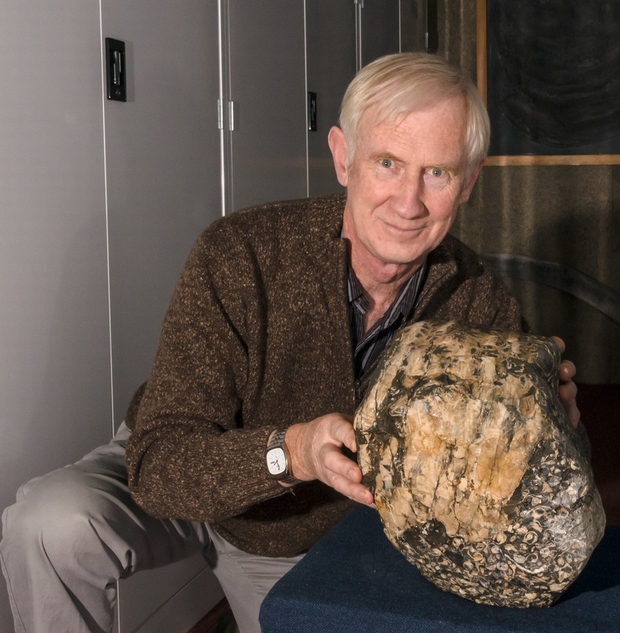 John Simes with the fossilised shell of a giant dinosaur-era ammonite that he almost stumbled over during a fossil-hunting excursion up the Waiau River, not far from where Joan Wiffen had made her fossil discoveries. The ammonite will soon be on display at GNS Science. (image: Margaret Low)

You can also listen to a Spectrum programme, broadcast in 1996, and held by Sound Archives - Ngā Taonga Kōrero.