It's official now. The kiwi is not an Australian import, as previously thought, but rather a close cousin of the flightless, and long extinct, elephant bird from Madagascar. 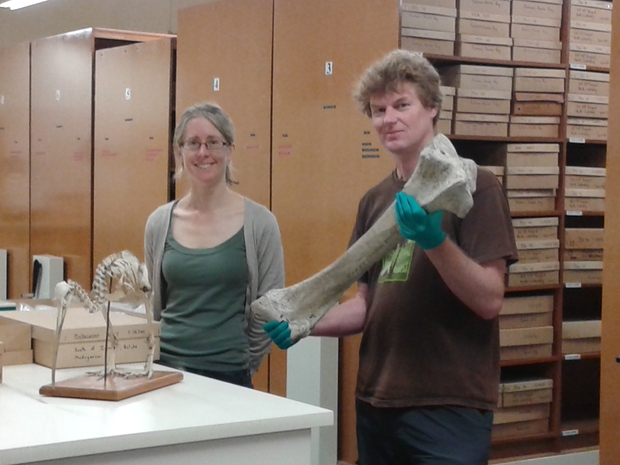 Te Papa's researcher Lara Shepherd and curator for vertebrates Alan Tennyson with some of the elephant bird bones that have yielded just enough ancient DNA to allow evolutionary biologists to redraw the kiwi's family tree.

A new study, led by the University of Adelaide's Alan Cooper, the director of the Australian Centre for Ancient DNA, has solved a 150-year-old evolutionary mystery about the origin of a group of flightless birds called the ratites. The group includes some of the world's largest birds such the emu and the ostrich, and the extinct moa and elephant bird, as well as the kiwi.

With a few exceptions such as the kiwi, ratites are big and flightless. For a long time, scientists thought that the group had evolved from a common ancestor that was itself big and flightless and had lived when all southern continents were fused into a supercontinent called Gondwana. Once that giant landmass began to break apart, the ratite ancestors rafted away with each chunk of land and evolved into the species we know today. Or so the story went ... but it didn't match with genetic evidence.

Alan Cooper has worked on ratites for more than two decades. His latest results not only rewrite the kiwi's evolutionary history but also correct his own earlier work. "Twenty years ago I published a PhD in New Zealand that showed that the kiwi, the national bird and icon of New Zealand, was merely an Australian import. Two decades on, DNA extracted from bones of a mysterious extinct giant from the other side of the world has finally set the record straight." 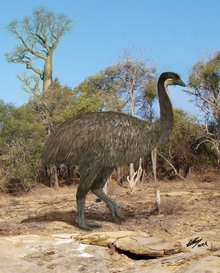 Elephant birds (as shown here in this artist's impression by Brian Choo, courtesy of the University of Adelaide) grew to about three metres tall and were heavier than the moa. Like the moa, they were hunted to extinction. Their bones have been traded between museum around the world, and some have made their way into the collections of the Museum of New Zealand Te Papa Tongarewa. Although Alan has sampled elephant bird bones from many other museums, it was the Te Papa bones that yielded just enough ancient DNA that made it possible to compare the results with those of other ratites.

Over the years, Alan's team had analysed the mitochondrial genomes of all other ratites, including the extinct moa. The elephant bird was the last member of the family to be scrutinised, but because the amount of ancient DNA available was so small, the mystery about the ratites' origin could only be solved with the help of the latest sequencing technology.

Ancient DNA has also been used to reconstruct what prehistoric New Zealand looked like before the arrival of people. One of the authors of the elephant bird study, University of Otago palaeo-ecologist Nic Rawlence, has used the technique to tease apart the factors that have contributed to the extinction of the moa - finding that the flightless giants became extinct because of overhunting rather than changes in climate. In this interview, Nic explains that New Zealand was once home to several prehistoric species of birds and marine mammals, including the Waitaha penguin.