The Genographic Project is welcomed onto the marae, and director Spencer Wells exchanges a hongi with Ngāi Tāmanuhiri chief executive Richard Brooking.

Last month, National Geographic's Genographic Project visited New Zealand to collect DNA samples from members of the Gisborne iwi Ngāi Tāmanuhiri as part of its global study of indigenous people, with the aim of using genetic markers to work out how people fanned out across the world.

During the New Zealand visit, the project's director Spencer Wells and principal investigator for the Oceania region, University of Otago anthropologist Lisa Matisoo-Smith, took cheek swab samples from iwi members as well as samples from the general public to help draw up a map of how people came to populate the islands of the vast Pacific Ocean. They also returned results to iwi members who had supplied their DNA during an earlier sampling event. Among them was Richard Brooking, the chief executive of Ngāi Tāmanuhiri, whose Y chromosome haplogroup (R1b) is the most common group from Western Europe, while his mitochondrial DNA haplogroup (B4a1a1), which is passed down the maternal line, is also known as the Polynesian Motif. This branch of the mitochondrial tree is thought to have been carried by the ancestors to most modern Polynesians when they embarked on expeditions of discovery and settled nearly every island in the Pacific.

The settlement of the Pacific was the last of the great human migrations, and New Zealand was its final destination. Modern humans first arose in Africa more than 150,000 years ago, but people reached New Zealand only 800 years ago, which means that Māori represent one the human tree’s youngest branches. 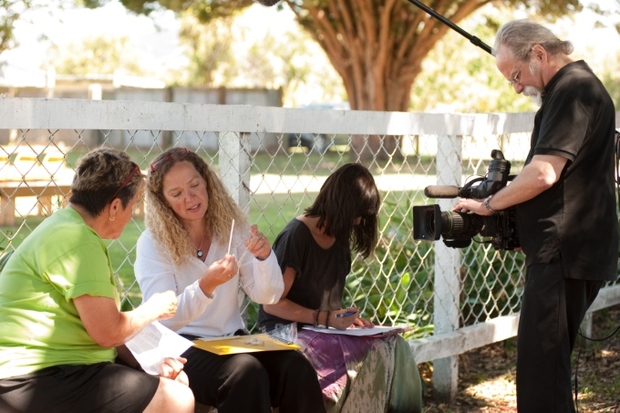 Lisa Matisoo-Smith explains the sampling method to a participant.

So far, the Genographic Project has sampled more than 650,000 people in 130 countries around the world. The New Zealand samples also form part of Lisa's research project From Africa to Aotearoa, the first genetic survey of New Zealanders, in which she attempts to trace human migration from our deepest roots in Africa to the distant South Pacific. You can listen to an earlier interview here, as well as our story on her team's work on the Wairau Bar, which is thought to be the landing place of the first people to settle in New Zealand. Spencer Wells also spoke to Kim Hill here.