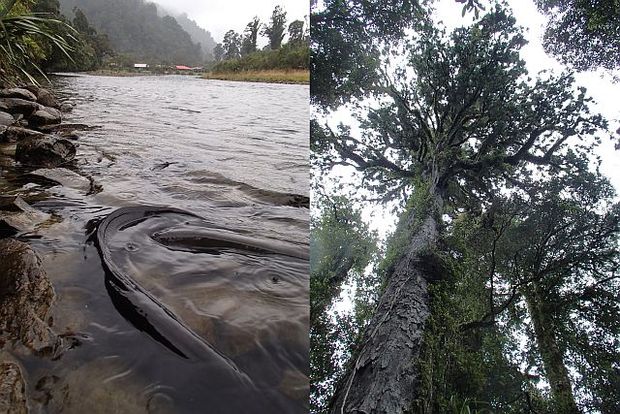 Longfin eels feeding with the Lake Moeraki Wilderness Lodge in the background, and a tall rimu tree on the Monro Beach Track in South Westland (images: A. Ballance)

Twenty four years ago conservationists Gerry McSweeney and Anne Saunders left Wellington to establish a wilderness lodge at Lake Moeraki in South Westland. They wanted to share their love of New Zealand nature with others, and show the West Coasters that tourism rather than logging could sustain the local economy.

Gerry is an ecologist, a Conservation Ambassador and Distinguished Life Member of Forest and Bird, and a member of the New Zealand Conservation Authority. He’s an outspoken advocate for restoring biodiversity at a landscape scale, and Alison Ballance joins him for a walk in his forested backyard next to Munro Creek to hear his views on predators, 1080 and healthy forests.

The forest surrounding the Lake Moeraki Wilderness lodge is part of the Te Wahipounamu World Heritage Area and has been regularly treated with 1080 for the last few years, and Gerry McSweeney says he has noticed a significant improvement in the numbers of forest birds such as kaka, while there are still four pairs of crested grebe nesting on Lake Moeraki; grebes have disappeared from the most other Westland lakes over the last 20 years. In his Sanderson Address to Forest and Bird in June 2013, Gerry argued that the Department of Conservation (DoC) should be increasing its use of 1080 to reduce numbers of rats, mice, stoats and possums, and encourage forest restoration. 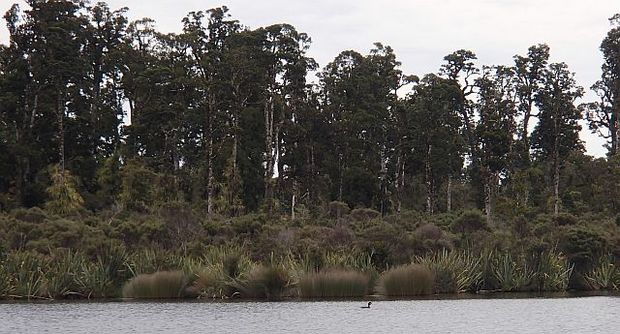 A southern crested grebe on Lake Moeraki, with kahikatea forest in the background (image: A. Ballance)

Earlier this year the Minister of Conservation Nick Smith announced a Battle for our Birds programme, to deal with a rise in predator numbers expected later in the year as a result of large beech mast seed event during the summer of 2013-14. The programme increases pest control in 35 forests to protect 12 native species, and mainly involves using 1080. An additional 500,000 hectares will be treated in this mast year, increasing the proportion of public conservation land protected from these pests from five per cent to 12 per cent. It also involves expanding DoC’s on-going pest control work by 50,000 hectares each year over the next five years.