Blue cod (left and right photos), butterfish (centre) and paua (right) quickly increase in numbers and size when protected in a marine reserve. All photos taken in the Taputeranga Marine Reserve by Malcolm Francis.

New Zealand’s first fully protected marine reserve was created in 1975 at Goat Island near Leigh. The Minister of Conservation’s announcement on 2 March 2014 that three new marine reserves around Bounty, Antipodes and Campbell islands in the subantarctic had come into effect brings the total to 37. Six more reserves will be created during 2014 - five on the West Coast and one at Akaroa - bringing the total number of marine reserves in New Zealand to 43.

‘No take’ marine reserves that are created under the Marine Reserves Act 1971 (a new marine reserves bill has been stalled for a few years but may come before the House this year) are a type 1 Marine Protected Area, or MPA. As well, there are currently 16 type 2 MPAs, some of which are full no-take and some of which are only partially protected. These include marine parks, some cable and pipeline closure zones and some fisheries closures. 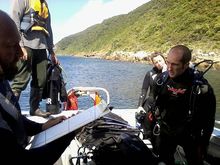 In this programme to mark Seaweek Alison Ballance talks with Jonathan Gardner at Victoria University about his involvement in the creation of Taputeranga Marine Reserve in Wellington. She then joins a team (left) from Waikato University, the Department of Conservation and Victoria University, carrying out monitoring in the Kapiti Island marine reserve, north of Wellington, and talks with Phil Ross, PhD student Alix LaFerrierre, Shane Geange and DoC ranger Dave Wrightson. She also catches up with Chris Battershill, who holds the Bay of Plenty Regional Council Chair in Coastal Science at Waikato University. We hear from everyone in the programme how marine life in no take marine reserves in New Zealand shows a very positive response to protection.

Government policy has a target of protecting 10% of New Zealand’s marine environment in a network of representative marine protected areas. This matches the United Nations Environment Program’s International Convention on Biological Diversity target of 10% global ocean protection by 2020.

So how are we going? It depends on what kind of marine protected Area or MPA you mean – a full no-take marine reserve or some other level of protection – and whether, for marine environment, you consider just territorial waters out to the 12 nautical mile limit, or whether you include all waters in our complete Exclusive Economic Zone, or EEZ, out to 200 nautical miles.

Minister of Conservation Nick Smith’s press release on the new subantarctic marine reserves says they will expand the proportion of our territorial sea that is protected to 9.5%, close to the target of 10%. However, as a proportion of our entire marine environment the figures don’t look quite so good – just over 0.4% of our more than 4 million square kilometre EEZ is protected in marine reserves, or just over 0.55% if you also include the 16 type-2 MPAs.

Invertebrates, including octopuses (centre), and marine algae also benefit from being in a marine reserve. All photos taken in the Taputeranga Marine Reserve by Malcolm Francis.