A 'mosquito terminator’ jumping spider (Evarcha culicivora), from east Africa, holds a mosquito it has just caught; a number of the spider's eight eyes are visible. These little spiders are able to catch prey much larger than themselves (right) (images: Robert Jackson) 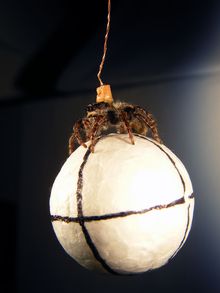 Ximena Nelson leads research into vision in jumping spiders at the University of Canterbury, which is known world-wide for its spider research. Alison Ballance joins her in the Spider Lab, to meet some of the spider species she works with, and then watches as an East Africa ‘Mosquito terminator’, more properly known as Evarcha culicivora, is given an ‘eyesight test’. These little jumping spiders hunt Anopheles mosquitoes, which are vectors for malaria. Spiders have eight eyes, and rather than move their eyes they turn their whole body towards an object of interest, and when they recognise something as food (even if it is an abstract representation of a mosquito) they will jump on it, which makes them ideal lab subjects.

Above: this jumping spider is suspended from a thread while it undergoes a vision test; the spider can't turn its body to look at objects, but instead it rotates the light polystyrene ball it is holding, which allows researchers such as student Amber Melrose to see what it is looking at (image: Daniel Zurak)