Stoat Toxin and the Spitfire Trap

James Ross (left) holds a DNA-testing kit, a trail camera and, in his mouth, a wax chew tag; Elaine Murphy (centre) holds a Spitfire trap wth a tunnel on top: and Tim Sjoberg (right) holds various stoat lures that he has been testing with captive stoats (images: A. Ballance)

Stoats, along with ferrets and weasels, belong to a group of small predatory mammals known as mustelids. They were introduced to New Zealand in the 1880s to control rabbits, but have become instead ‘public enemy number 1’ for native birds. At the moment they are controlled through trapping or as by-kill during rat poisoning programmes. However a new toxin and targeted delivery system are showing great promise as a new method of control, as Alison Ballance discovers when she meets James Ross from Lincoln University, and Elaine Murphy and Tim Sjoberg from the Department of Conservation.

In 2011 the New Zealand Environmental Risk Management Authority approved the use of the new poison which is known as PAPP (para-aminopropriophenone), which is specific to stoats and feral cats. The Spitfire trap has been developed as a way of developing a squirt of paste of PAPP to the belly of a stoat; stoats respond to the paste by licking it, and are quickly and humanely killed. PAPP works as a red blood cell toxin, preventing haemoglobin from carrying oxygen. A trap can deliver 100 squirts of PAP before it needs to be reset.

The research is a collaboration between the Department of Conservation, Connovation, Landcare Research, Lincoln University and the Invasive Animals Cooperative Research Centre of Australia.  Plant and Food Research and Waikato University have also been involved in developing new stoat lures. 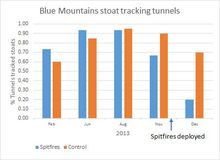 The Spitfire trap and PAPP toxin were field tested in the Blue Mountains of West Otago in November and December 2013, and as results on the graph (left) show there was a significant knock-down in stoat numbers recorded in tracking tunnels in the study site (blue bars), compared to the untrapped control area (orange bars). However, wet humid weather caused some problems with the electronic component of the trap, which is now being fixed before further field trials.

Work is underway to try and find a toxin that would work specifically on rats, but that is some way off yet.

Peter Dilks (left) holds a Spitfire trap inside a wooden box designed to prevent non-target animals reaching the trap, during a field trial in the Blue Mountains; as a stoat runs through the tunnel (centre) PAPP toxin is sprayed on their belly through the small nozzle; and an egg is used to lure stoats into the trap during the field trial (images: DoC and A. Ballance)

This video of a stoat leaving a Spitfire trap was taken by a remote camera during field trials in the Blue Mountains in West Otago – the stoat leaves hurriedly after its belly was sprayed with the stoat-specific toxin PAPP. Video courtesy of Department of Conservation