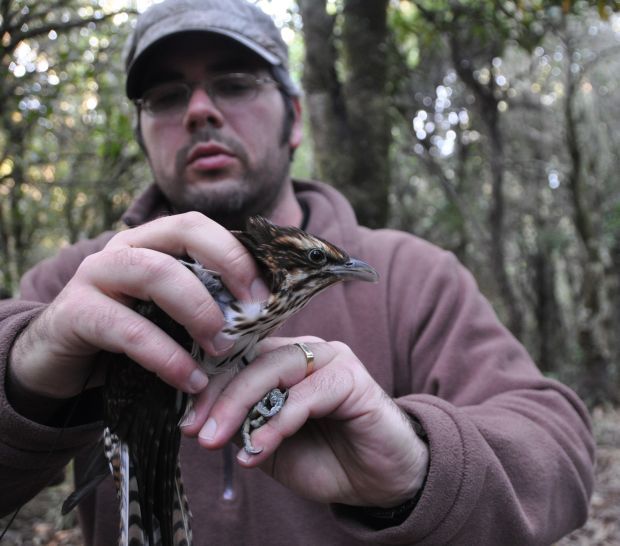 Cuckoos are famous for laying their eggs in the nests of other birds – and not having a nest of their own makes them much harder to study than most birds. But transmitter technology has just advanced to the stage where it’s possible to tag them using tiny solar-powered transmitters that send location data back via satellite every second day.

Massey University post-doctoral researcher Michael Anderson is in the second year of a project looking at the movements of long-tailed cuckoos between their summer breeding grounds in New Zealand and winter feeding grounds in the Pacific, and for the story of One Flew Flew Over the Cuckoo Net Alison Ballance joins him on Hauturu-Little Barrier Island, in the Hauraki Gulf, where the team has to erect mist nets high in the forest canopy to catch the high-flying cuckoos.

The team was unsuccessful in catching any long-tailed cuckoos during their first 8-day trip, but Michael Anderson reports that has just returned from a second trip to the island and successfully managed to put transmitters on four birds. One bird has already made a 4-day visit from Hauturu-Little Barrier Island to Kawau Island, a round journey of about 60 kilometres.

Michael Anderson featured in an earlier Our Changing World story about Mohouidae, a new endemic bird family that encompasses the host birds of New Zealand cuckoos – long-tailed cuckoos lay their eggs in the nest of whiteheads, mohua and brown creepers, while shining cuckoos are brood parasites of grey warblers.

The cuckoo team erecting a mist net (left): the grey area in the middle of the photo is the fine black mist net, which appears invisible when suspended; Michael Anderson, Mark Delaney and Luis Ortiz Catedral next to a mist net that has been rolled up while not in use (images: A. Ballance)