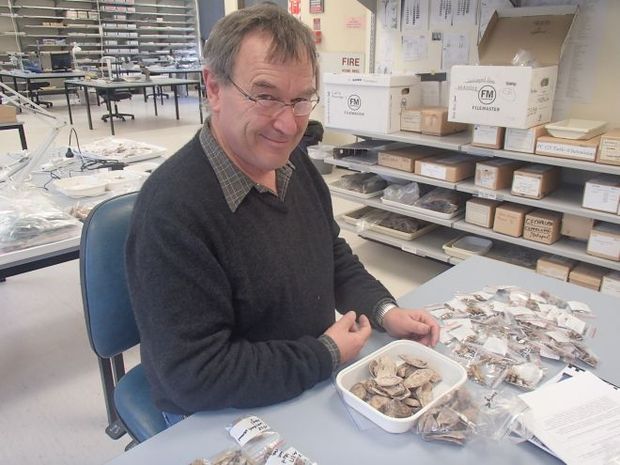 Ian Smith in the archaeology lab with tuatua shells that have been counted to quantify the amount of shellfish eaten by early Maori (image: A. Ballance)

New Zealand was the last major landmass to be settled by humans, around 1230 to 1280 AD, and the multi-disciplinary Taking Stock project has been looking at the structure and functioning of New Zealand’s coastal shelf ecosystems over the short period since we’ve been here. It is part of the international History of Marine Animal Populations project.

Archaeologist Ian Smith from the Department of Anthropology and Archaeology at University of Otago has been investigating what marine food was on the menu for early Maori in the wider Hauraki Gulf area and on the Otago-Catlins coast. These areas were chosen as case studies as they were both settled by Māori at about the same time, but have since experienced contrasting trajectories in human population size and marine resource use. Ian has been data-mining existing evidence from about 100 midden sites, and Alison Ballance joins him in the lab to see some of the bones and shells from various species of fish, shellfish, seals and sealions, and seabirds.

You can read more about the research in this paper: Pre-European Maori exploitation of marine resources in two New Zealand case study areas: species range and temporal change, by Ian Smith in the Journal of the Royal Society New Zealand 43 (1): 1-37.