Life in the Deep Ocean 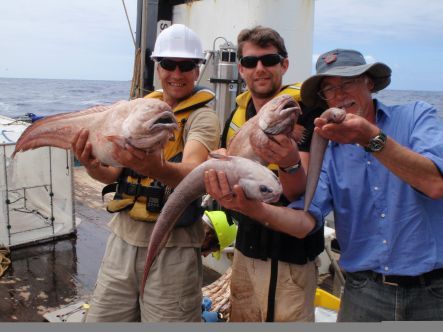 A team of marine scientists from NIWA, the University of Aberdeen and Te Papa Tongarewa recently returned from a survey of the oceans near the Kermadec Islands with a new species of deep-sea fish, large numbers of amphipods and thousands of images of previously unseen marine habitats. The voyage was the fourth leg of an expedition which has taken samples from waters between one and nine kilometres deep along the Kermadec Trench, well below the depth that light penetrates, to explore how the biodiversity in the trench differs from that at shallower depths and in other trench systems.

The Kermadec Trench is the fifth-deepest places on Earth, with depths exceeding 10 kilometres, and one of the coldest places in the ocean. During this voyage, the team caught about 100 fish in baited traps and discovered a new species of eelpout, new records of a rattail fish that hasn't previously been caught in the south-west Pacific and a large deep-sea cusk eel. They also caught another species of rattail, known as the Cosmopolitan Rattail, which was last captured off New Zealand by the HMS Challenger in a global scientific expedition in the 1870s.

Large numbers of amphipods were also sampled to add to the collection from earlier expeditions. Amphipods are a type of crustacean particularly common in the deep sea, and are found in greater numbers at greater depths. Typically, deep-sea amphipods are two to three centimetres long with the exception of the slightly larger 'giant' amphipod found in Antarctica. During an earlier expedition to the Kermadec Trench, the team caught several 'supergiant' amphipods, ten times the usual size.

In this story, NIWA principal scientist Malcolm Clark and voyage leader Alan Jamieson discuss how the results from this expedition add to the understanding of biodiversity in the deep sea around New Zealand. Our Changing World has followed this expedition and you can listen to our earlier interviews about supergiant amphipods and deep-sea snailfish.