Earthquake Impacts on the Heathcote-Avon Estuary 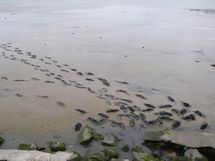 For many years Christchurch’s treated sewage was put directly into the Heathcote-Avon Estuary, until in March 2010 a 3-kilometre long ocean outfall diverted the wastewater out to sea. David Schiel from the University of Canterbury and John Zeldis from NIWA were investigating the effects of the diversion on the ecology and health of the very eutrophic Heathcote-Avon Estuary when the 2011 Christchurch earthquakes happened, re-engineering both the estuary and their experiments. The southern half of the estuary was uplifted by half a metre while the northern half sank by half a metre, there was significant liquefaction across much of the estuary, and 7 billion litres of raw sewage flowed into the estuary before the city’s reticulation system was fixed.

Alison Ballance catches up with David and John, as well as technician Paul South and PhD students Jen Skilton and Kristin Scheuer to find out what happened and what state the estuary is in now. They meet at what had been one of the worst polluted sites in the estuary, but which no longer has the deep mats of rotting macroalgae (pictured above). NIWA has prepared reports for the Christchurch City Council on impacts on macroalgae (PDF) such as sea lettuce and also on the biota (PDF).

David and John’s project ‘After the outfall’ featured in a previous Our Changing World story in March 2010, at the time of the wastewater diversion.