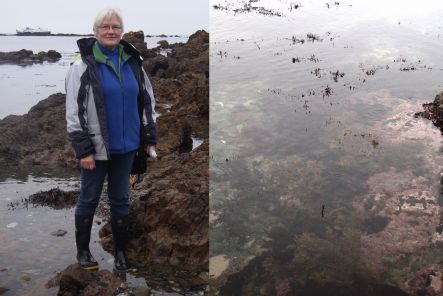 Wendy Nelson collecting seaweeds on Wellington's south coast, and a variety of seaweeds, including pink coralline turf, seen under the water at low tide (images: A. Ballance)

Whether it’s delicate pink filaments or large brown leathery straps, seaweeds in all their forms and colours are a feature of our rocky coastline. And no one knows more about New Zealand seaweeds than NIWA’s Wendy Nelson. Wendy is a phycologist – someone who studies algae, and Alison Ballance joins her on a collecting trip to Wellington’s South Cast to find out more about these marine plants. 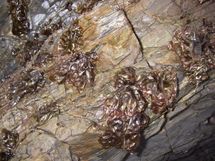 One of the seaweeds – which are also known as marine macroalgae – that Wendy is interested in is karengo which grows on rocks near high-tide level and resembles sheets of light purple cellophane. It is known as nori in Japan, where it is dried and used to wrap sushi. All these similar edible seaweeds used to be classified as the genus Porphyra. However, a recent international collaboration, including Wendy, has split this group into four new genera, and one kind of New Zealand karengo is now in the genus Pyropia, with some species still waiting to be described. There are several species of karengo - including an undescribed one - in the photo to the left.