Palaeontologists investigating fossil-bearing clays being eroded from the banks of the Manuherikea River, and a fossil bird bone (Images: A. Ballance)

Over the last 11 years a fossil site near St Bathans, in inland Otago, has revealed many insights into the animals of prehistoric New Zealand. 16-19 million years ago the area was an enormous shallow lake, much larger than Lake Taupo today. It was home to many kinds of birds including waterfowl, parrots, wrens and moa, along with tuatara and bats. New Zealand’s first terrestrial mammal, along with a small terrestrial crocodile and terrestrial turtles, have also been discovered at the site.

You can listen to earlier Our Changing World interviews about the birds and the turtle discoveries at the St Bathans fossil location. Kathryn Ryan also interviewed Trevor Worthy about the tropical superlake. 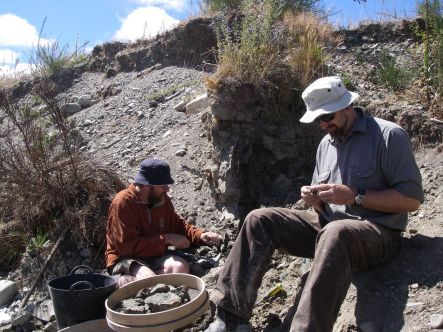 Paul Scofield (left) and Steve Salisbury (right) putting material into sieves ready to be be put into the river to separate out fossils (Image: A. Ballance)