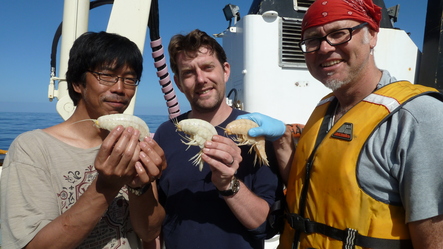 A recent expedition to the Kermadec Trench, one of the deepest places on Earth, has returned with a surprise catch of supergiant amphipods.

Amphipods are crustaceans, and many people are familiar with some of the smaller species, for example sand hoppers on the beach. But larger amphipods are also common in the deep sea, occurring in greater numbers the deeper you go. Typically deep-sea amphipods are two to three centimetres long, with the exception of the slightly larger giant amphipods found in Antarctic waters.

Supergiant amphipods can reach lengths of 30cm and more. They were found by scientists from the University of Aberdeen and the National Institute of Water and Atmospheric Research, who led a joint UK/New Zealand expedition to the Kermadec trench, north of New Zealand. Using especially designed ultra-deep submergence technology, the team deployed a camera system and a large, baited trap to depths ranging from 6900 to 9900 metres. The team’s original goals were to recover smaller amphipods and specimens of the deep-sea snailfish, which had not been captured since the early 1950s but had been photographed previously by the team at approximately 7000 metres depth. However, the focus shifted when several supergiant amphipods emerged among hundreds of normal-sized specimens.

This week, NIWA marine ecologist Ashley Rowden explores how these amphipods could grow so large, and how they survive several kilometres deep in the ocean. Next week, Te Papa Tongarewa fish taxonomist Andrew Stewart introduces the equally unusual deep-sea snailfish.