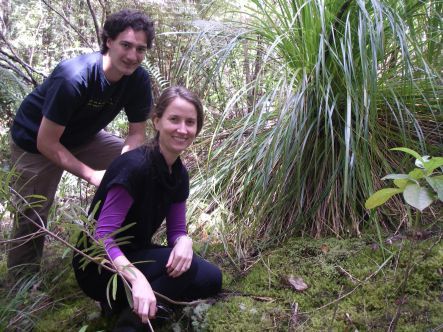 Nathan Camp and Anne Gaskett next to a large patch of dung moss (image: A. Ballance)

If you had to think of something that liked growing on animal remains or animal dung, and even smells like them, chances are you wouldn’t have thought of moss. But there is indeed a stinky moss that does just that, and they're even known as dung mosses, belonging to a group called Splachnaceae. The University of Auckland’s Anne Gaskett is fascinated by them. Anne is a behavioural ecologist, and she is studying why these mosses create odours that mimic rotting flesh and dung, and is finding that the sneaky mosses are deceiving flies which then move the moss spores to suitable new sites. Anne and student Nathan Camp take Alison Ballance to their study site in the Waitakere Ranges.

New Zeland dung mosses are in the genus Tayloria, and they have distinctive red stalks (images: A. Ballance)