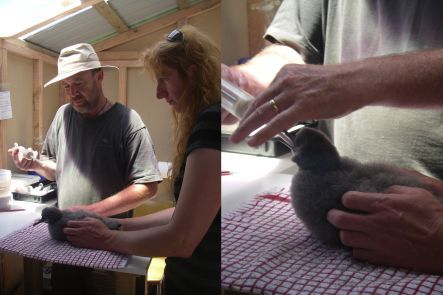 Over the last 40 years a huge community effort has transformed Matiu-Somes Island in the middle of Wellington Harbour from bare paddocks to a thriving forest. A number of rare animals, such as red-crowned parakeets and tuatara, have been reintroduced to the island, and they have been joined by 80 fluttering shearwater chicks. The shearwater translocation has been organized by the Matiu-Somes Restoration Trust in an effort to return seabirds to the island, and Alison Ballance joins Shane Cotter and his team of volunteers on the island to find out more.

The chicks have been placed in specially made burrows, and are being fed daily sardine smoothies. When they are large enough to fledge they will leave the island for up to four years, then hopefully they will return to begin breeding.

Our Changing World has featured several stories about Matiu-Somes Island. Shane Cotter’s father Reg featured in this story about little blue penguins on the island, and Peter Russell has talked about weeds on the island.

This transfer is modelled on a successful fluttering shearwater translocation to Mana Island - this work featured in an earlier Our Changing World story. 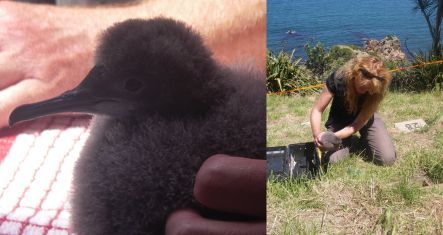 Fluttering shearwater chick, left, and Helen Gummer returning a chick to its artificial burrow at the south end of Matiu-Somes Island (images: A. Ballance)