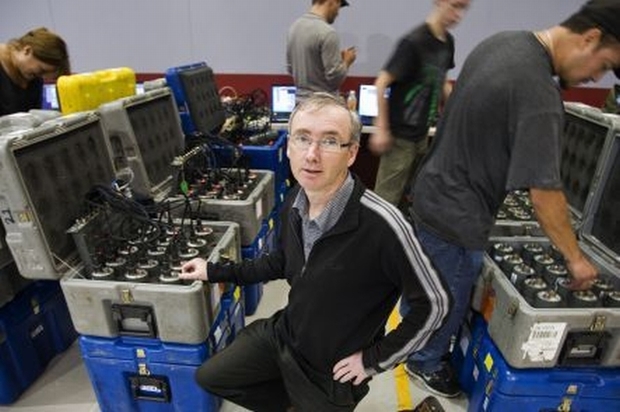 Stuart Henrys, at GNS Science, prepares some of the seismic recorders for deployment in the field. Nine hundred of these instruments were set up across the lower North Island to monitor a series of explosions. Photo: Margaret Low / GNS Science

An international team, led by New Zealand geologists, has produced the clearest image yet of the tectonic plate boundary beneath the North Island – with the help of tonnes of dynamite.

The findings, published in the journal Nature this week, are the result of one of the biggest deployments of seismic equipment in New Zealand, which used 900 seismic recorders along a transect spanning the lower North Island to record the echoes of several explosions.

The experiment was carried out in 2012. Each explosion contained half a tonne of dynamite, detonated to mimic a small earthquake. At the time, I joined the project leaders, Victoria University geophysicist Tim Stern and Stuart Henrys at GNS Science, and their team in the field as they tuned in to detect the underground waves created by the controlled explosions. You can listen to my feature below.

New Zealand straddles the plate boundary between the Pacific plate, which lies to the east of the North Island and is being forced under the Australian plate. The giant slabs are sliding past each other, but the movement is not uniform.

The team set up seismic recorders from Kapiti Island to just east of Martinborough in the Wairarapa to track the echoes bouncing off the top of the Pacific plate, which is 15 to 30 kilometres below the Earth’s surface.

But Tim Stern says the team was surprised to find the explosions were felt all the way to the bottom of the plate.

In a Morning Report interview he explained that the Earth’s surface is made up of about 16 tectonic plates, all moving relative to one another. “We know a lot about the edges of the plates where they dive under the continents, like under the eastern part of the North Island, because that’s where all the major earthquakes occur. But what we don’t really understand is what happens at the base of the plates … this is what dictates how the plates move.”

The original experiment was designed to investigate the top surface, but then the team detected “curious looking echoes from deeper down”, almost 100 kilometres below at the base of the plate.

“This had never been imaged before with this type of survey for an oceanic plate,” says Tim Stern.

'What we see down there … is a double echo and it seems to define a channel which we think is about 10 kilometres thick, and from our data we can figure out that … there is some form of change of the material of the rocks.'

The team says the findings provide new insights into the forces and stresses that occur at the edges of the plates, which in turn will help with the broader understanding of earthquakes, not just in New Zealand but globally.

Here you can listen to the Morning Report interview:

You can find out more about this project on GNS Science outreach educator Julian Thompson’s blog.