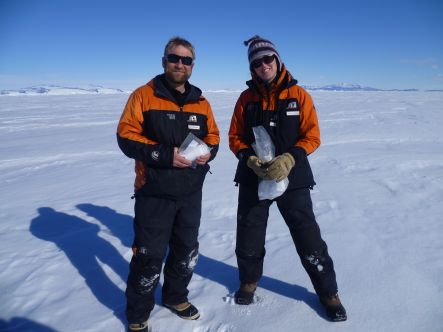 Alison Ballance caught up with Cliff Atkins and field assistant Jane Chewings at the end of their dust collecting adventures to find out what they'd been doing.(Image: A. Ballance)

We usually think of geologists as people who study rocks, but this summer a team of geologists from Victoria University of Wellington spent a couple of months in Antarctica collecting snow. They weren't so much interested in the snow, though, as what was in it - and that turned out to be surprisingly large amounts of dust.

Cliff Atkins has spent many years working on projects such as the Andrill drilling project, where they had noticed annual layers of dust in their sediment cores that were tied to evidence of annual phytoplankton blooms. It has long been known that its proximity to the Dry Valleys and the bare volcanic rock of Ross Island make McMurdo Sound one of the dustiest places in Antarctica, but Cliff decided it was time to quantify exactly where all the dust was coming from and how much was falling on the sea ice in McMurdo Sound each year. This would provide both information about the processes driving spring and summer phytoplankton blooms when the sea ice melts and the iron-rich dust 'falls' into the sea, and also help calibrate the geological sediment cores.