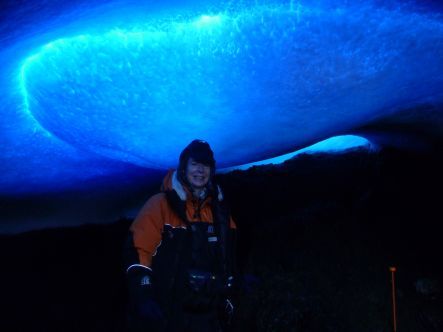 Alison Ballance under the Blue Dome in Hut Cave, on the upper slopes of Mount Erebus (image: A. Ballance)

Waikato University's Craig Cary is a microbiologist with a special interest in 'extremophile microbes'. His work has taken him to deep sea vents, and more recently to the Dry Valleys and Mount Erebus in Antarctica. Mount Erebus is an active volcano with a lava lake at the summit (3794 m), one of just three such lava lakes in the world. Craig Cary is in the second year of a Marsden-funded project to determine microbial biodiversity in thermally heated soils at Tramway Ridge, where soils are 65ºC, and in ice caves closer to the Lower Erebus Hut where the soil temperature is a cooler 10ºC. Alison Ballance hitches a helicopter ride up the mountain, and talks to Craig Cary about his work during a visit to Hut Cave, an ice cave with a spectacular 'blue dome' ice roof. You can listen to a previous interview with Craig Cary in the Dry Valleys here.

Tall ice towers formed above steam vents on the upper slopes of Mount Erebus (left), and the microbe team outside Lower Erebus Hut with the summit of the volcano above (images: A. Ballance)