Designing a pressure sensor for the brain

Simon Malpas and his lab group are dedicated to figuring out how to detect pressure in the brain; pressure caused by a build-up of fluid, a condition known as hydrocephalus. But it’s pressure of another kind that gets Malpas and his team out of bed every morning and drives them on.

"We often meet patients and their families, and neurosurgeons as well, and a common thing they say is, if you can get this to work, its a game-changer for their lives"

Malpas has been interested in how you detect pressure inside the body for many years, but these days he and his colleagues at the Auckland Bioengineering Institute are trying to invent a new kind of implantable brain pressure sensor to help hydrocephalus patients. If they can, it will be the first New Zealand designed Class 3 medical device.

In New Zealand medical devices are rated by their potential risk from Class 1 (low risk) upwards. A Class 3 device is something that is long term implanted in the body, and is, therefore, high risk (for example, a cardiac stent). 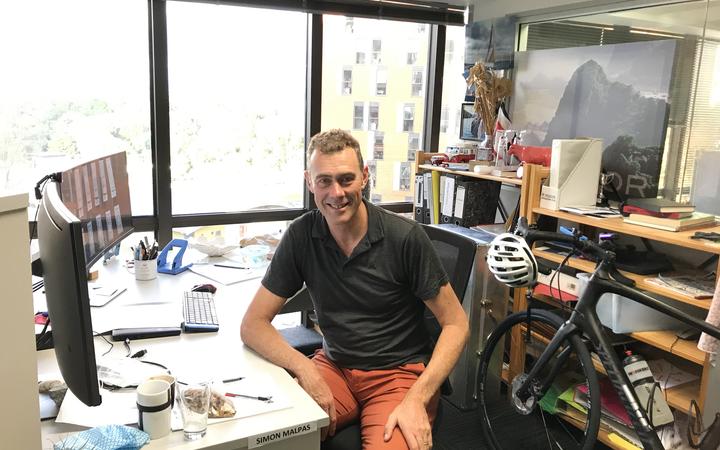 Simon Malpas at his desk in the Auckland Bioengineering Institute. Photo: RNZ/Claire Concannon

In hydrocephalus, a build-up of fluid around the brain increases the pressure, which can impact brain function, cause brain damage, and can even cause death. Normally, about half a litre of cerebrospinal fluid is produced in the body each day. The fluid flows through cavities in the brain called ventricles, and bathes the brain and spinal cord, before being reabsorbed into the bloodstream. An imbalance of this – either by overproduction of fluid, or blockage of the absorption back into the bloodstream – can result in a build up. While it can affect anyone at any age, hydrocephalus is most common in infants and other adults. 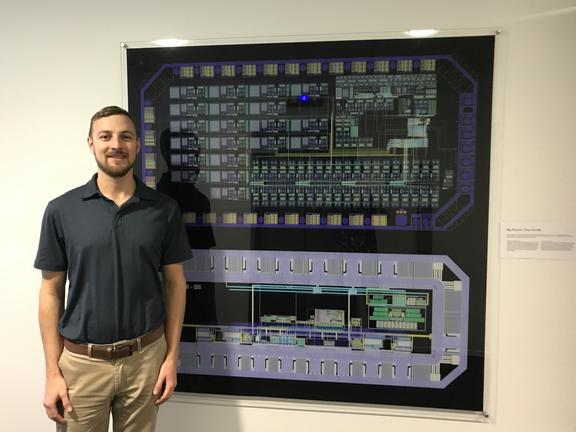 Robert Gallichan stands next to a blown up image of the electronic circuit he has designed to go in the sensor. Photo: RNZ/Claire Concannon

Before the invention of an implantable shunt to drain this fluid, hydrocephalus was almost universally fatal. But unfortunately, the shunts commonly used today are still failure-prone - in children the failure rate is 30 – 40% at one year and about 50% at two years. This can be due to a variety of reasons, including infection, blockage and mechanical failure. Some of the most common early symptoms of a shunt failing are nausea and headache, which can create a lot of uncertainty and anxiety amongst patients and their families. Is the headache they are experiencing due to shunt failure, or something more innocuous?

By designing a sensor that can be implanted in patients alongside the shunt, this team hope they can relieve this uncertainty by providing a way to directly measure brain pressure. This would help patients know whether their shunt was still working well. If the shunt does start to block or fail, it may even allow them to detect pressure changes before symptoms occur.

Designing a device to be implanted into a brain is no easy task, especially as it must be made as small as possible - the prototype sensor is just 2mm x 3mm x 18mm. Different researchers in the group have focused on distinct aspects of the challenge - designing a membrane that will deflect under pressure, creating the tiny electronic circuitry that will translate this deflection into a pressure reading, figuring out a wireless means to power the sensor, and developing laboratory test equipment to assess the sensitivity and durability of the sensor. 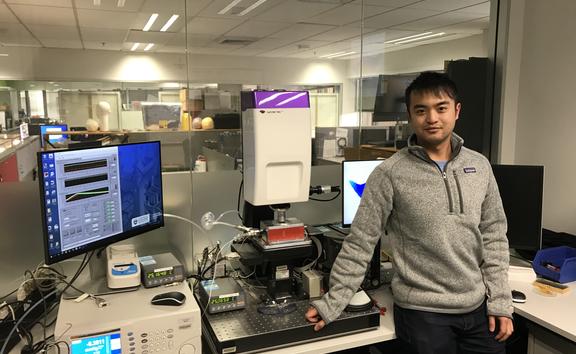 Dixon Leung stands next to the profilometer. Photo: RNZ/Claire Concannon

"We don't normally think in a research sense about manufacturing. So to plan for that now has been one of the innovative parts of our programme. We're making sure that what we can design and come up with, and we think will work for the application, is going to be manufacturable." says Bryon Wright, senior sensor development engineer. The group are clear that this is not an academic exercise, their goal is ultimately to produce a device that can help patients and their families switch from reactive to proactive care.

While they have been researching in this space for a long time, the team have been working hard on the design of this specific device for the last four years. They have been supported by MBIE, the HRC, Cure Kids, the Neurological Foundation and the Auckland Medical Research Foundation, as well as some philanthropic donors. They are aware that there is much more to do, but with the testing they have done so far they are starting to feel confident in their design, and hope to see it in clinical trials within three years. 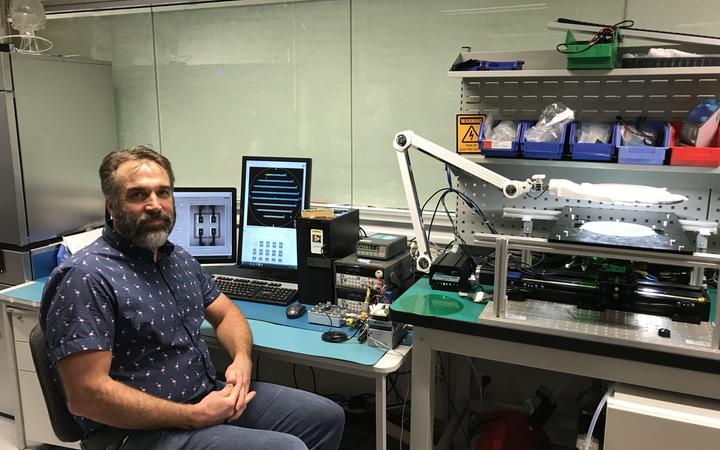 Bryon Wright next to test equipment the lab has made to check the sensor. Photo: RNZ/Claire Concannon