Wahakura - a woven cradle to save babies' lives

Professor David Tipene Leach, from the Eastern Institute of Technology, has won the 2020 Tahunui-a-rangi Award from the Royal Society Te Apārangi .

David led a team which applied mātauranga Māori to create the wahakura, a woven flax bassinet to address the problem of sudden unexpected death in infancy by creating a safe shared sleeping space for babies in their parents’ bed. 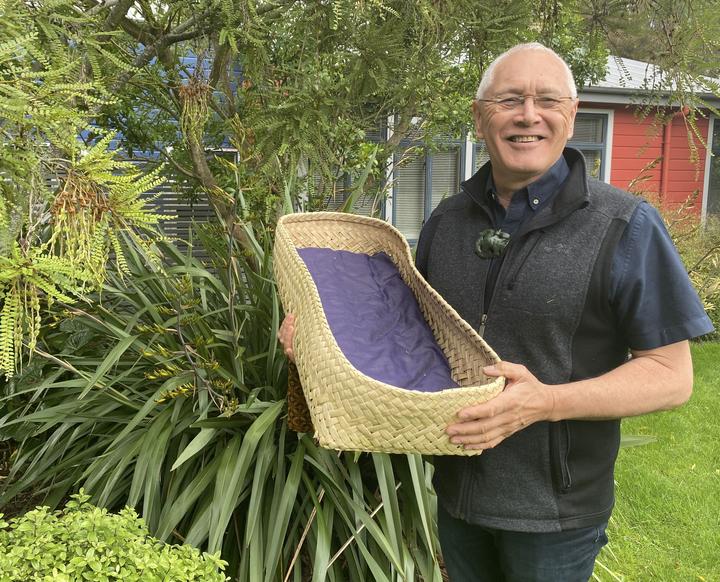 Sudden unexpected death in infancy or SUDI affects between 40 to 60 babies under the age of one in New Zealand each year.

Although rates of SUDI, which used to be called cot death or SIDS, have gone down markedly over the past 50 years, they remain significantly higher among Māori infants than non-Māori infants.

The major risk factors for SUDI are infants sleeping on their side or front, shared sleeping - babies with their parents - and parents smoking.

David says that a safe sleep programme encouraging parents to put babies to sleep on their backs significantly lowered the number of SUDI deaths. But by the mid-2000s the death rate had flattened out and David and his colleagues decided they needed to find a new strategy.

“We came up with this idea of a woven flax bassinet that was highly portable and could slip in between the parents.”

David says that parents loved the concept as it allowed them to safely share their bed with their infant and they liked the traditional concept of a woven flax basket.

Wahakura have been widely adopted in nation-wide Safe Sleep programmes, and led to a 29 percent drop in infant mortality.

Demand outstrips production of the hand-made cradle, and so the wahakura concept has also spawned a more widely available plastic bassinet known as a Pēpi Pod.

Listen to the full interview to hear David talk about the success of the wahakura, and pregnancy clinics where mothers-to-be learn to weave their own wahakura.