Shaped by the wind

Wind is a ubiquitous part of life, and it is important to design structures and devices that can effectively cope with it.

Mechanical engineers at the University of Auckland use New Zealand’s largest wind tunnel to help them understand the impact of wind on a wide range of objects, from cities to Olympic cyclists, and UAVs or drones to ancient buildings.

The wind tunnel at the University of Auckland’s Newmarket campus is 20-metres long and is what is known as a boundary layer wind tunnel.

Mechanical engineer Rajnish Sharma studies aerodynamics, and he says that the wind tunnel uses a closed-loop ducting system that uses a very large fan to blow air around the duct, which is bigger at one end.

“We have to slow down the flow in the enlarged section and then pass it through a contraction,“ says Rajnish. “By doing this we are able to reduce the turbulence levels and this helps us in aerodynamic studies that require clean air.”

He says that the wind tunnel can reach wind speeds of 20 metres per second, or about 70 kilometres per hour. However, by using scale models that are much smaller than real life engineers can effectively scale up in their calculations and model the impact of much greater wind speeds.

Rajnish says that wind tunnels have helped significantly in the better design of cities. Wellington in the 1980s, for example, was famous for having many streets that acted as wind tunnels, creating wind speeds at pavement level capable of blowing pedestrians over. 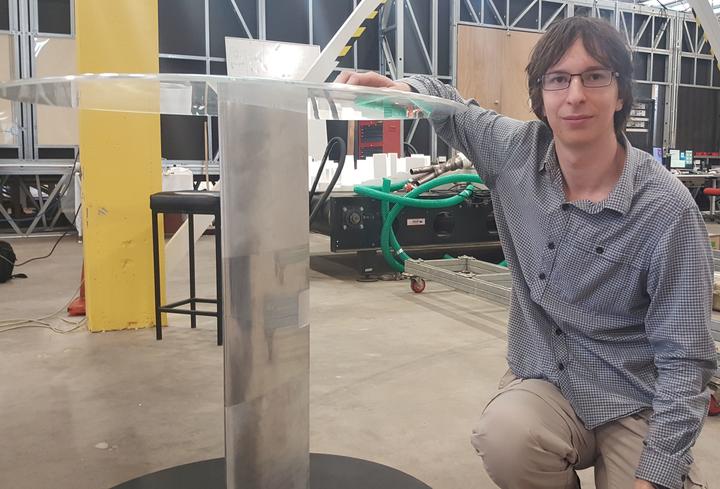 Nicholas Kay is studying the effect of turbulence on the wings of a small unmanned plane. Photo: RNZ / Alison Ballance

Modelling wind flow in wind tunnels allowed engineers to design some effective modifications using awnings one or two storeys above street level which diverted the wind and made life safer and more pleasant for pedestrians, even in gale-force winds.

All new large building developments in large cities such as Auckland and Wellington have to be design tested in a wind tunnel to ensure there are no unwanted wind effects.

Apart from commercial jobs such as this, Rajnish says the large wind tunnel, along with several smaller ones housed in the same room, are used in research by students.

Nicholas Kay is investigating the impact of turbulence on a small unmanned aerial vehicle or drone. He is studying the wing design of a small plane with the name of Kahu, developed by the Defence Technology Agency in New Zealand. It has a 2-metre wingspan.

Rather than put the whole drone in the wind tunnel, Nicholas uses a section of wing which he can fit with pressure sensors to measure wind flow across the wing. 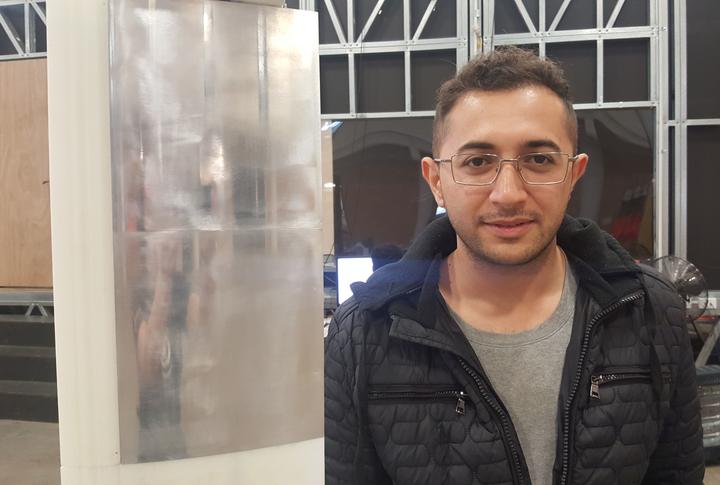 Nay Lin Oo is looking at the impact of ice on how wind flows across a drone wing. Photo: RNZ / Alison Ballance

Nay Lin Oo is using the same section of wing to investigate the impact of ice and how it affects the aerodynamics of the wing.

Rohann Dsouza has recently completed a PhD project developing an “ultra micro-scale gas turbine that is pretty much a miniature power source for portable electronic devices.”

The turbine rotor is just 2 centimetres across and sits in a small housing. He says it produces about 200 watts of power, and the power to weight ratio is about a thousand times more effective than airplane engines.

“They’re very light and produce a lot of power,” he says. “I can power things like your Lime scooters and electronic bicycles … so it’s very promising.”

He envisages it being used instead of a battery in laptop computers or mobile phones. 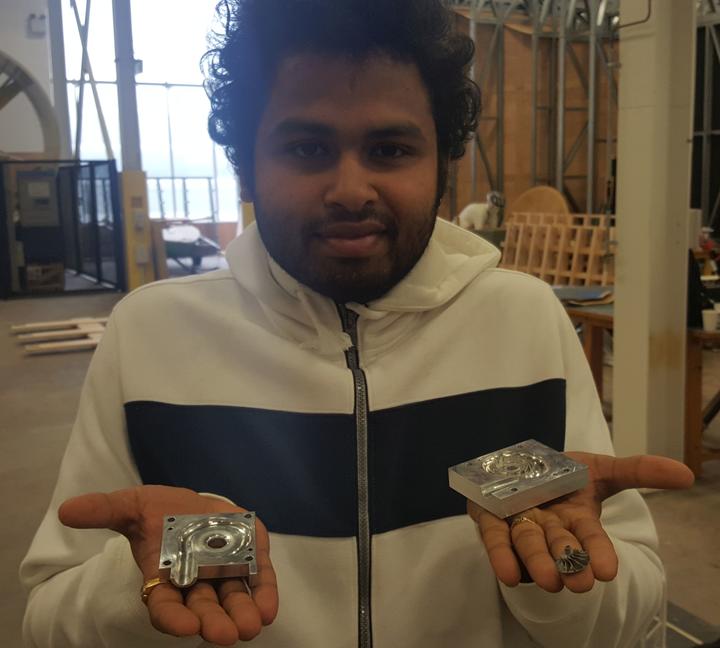 Rohann DSouza believes his ultra micro-scale gas turbine will in future be used as a power source instead of batteries to charge everything from electric bicycles to laptops. Photo: RNZ / Alison Ballance

Rohann says battery power is a major limitation for new electronic equipment, and believes this new power source could provide much more power for very long periods of time.

He says there are still challenges to overcome. “We have to spin at RPMs of 500,000,” he says. “Then bearings become challenging, and heat transfer becomes challenging.”

Rohann says the device has been tested using vegetable oil as the fuel and therefore has the potential to be very environmental friendly as well. 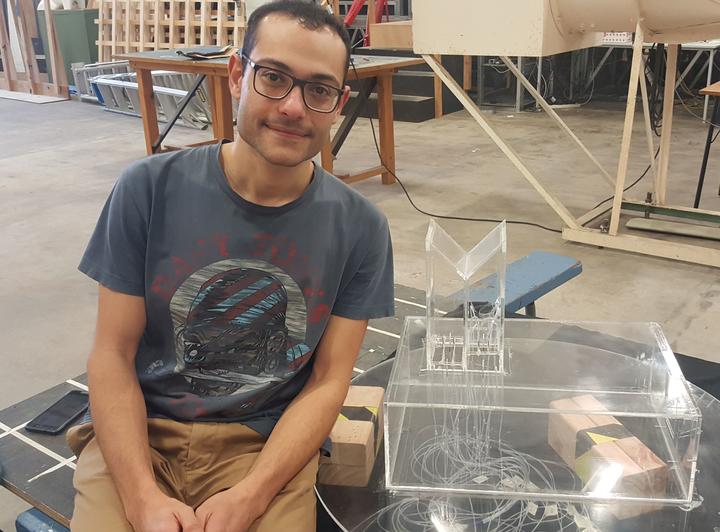 University of Auckland PhD student Ahmed Zake is using a wind tunnel to measure and model air movement in a small model of an Iranian school, which features a 2-sided wind tower to 'catch' the wind and provide ventilation. Photo: RNZ / Alison Ballance

Ahmad Zake has been using the wind tunnel to measure wind flow in a small model of a real Iranian school.

The school has a windcatcher on the roof to ‘catch’ wind and channel it into the building.

Ahmad says there are many kinds of windcatchers, which are an ancient building design much used in the Middle East, in dry climates.

He describes his work as “reviving ancient ways to study ventilation.”

The windcatcher design he is studying is like a large chimney, divided into two by a central partition. An angled opening at the top of the chimney on the windward side traps cool air which is funnelled down into the room. Warm waste air rises up the other side of the chimney and is expelled.

It is an effective way of ventilating and cooling a building that does not use any power.