Researchers at the University of Auckland hope that a new invention they are developing could spell the end of toxic antifouling paints currently in use on boat hulls and marina infrastructure.

The concept is to use electrical fields to repel small marine organisms from settling on bare surfaces underwater – and small-scale tests carried out to date show very promising results. 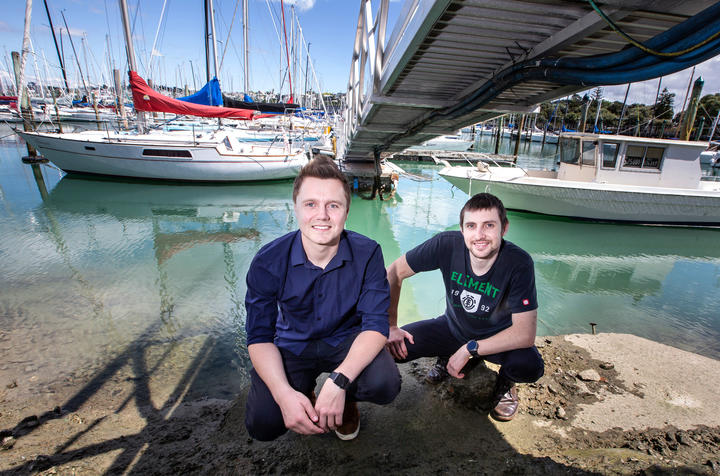 Nature abhors a vacuum – especially in the marine environment, where space is at a premium for encrusting organisms.

Any bare surface, such as a yacht hull or pontoon in a marina, is quickly settled by marine creatures. There are a number of issues with this. As the critters and plants grow they add drag to a boat. There is also the risk of spreading invasive species, such as Mediterranean fanworm, from port to port.

Boat owners deal with this by cleaning their hulls every couple of years and reapplying toxic, copper-based antifouling paint to inhibit growth. The undesirable consequence of this can be large concentrations of copper in the marine environment below the anchored boats.

Bioengineering students Chris Walker and Patron Illinberger are convinced there has to be a better solution.

The pair are based in the Biomimetics Lab at the University of Auckland, and after a few months of brainstorming they came up with the idea of using electrical fields.

If electricity and water sound like two things that don’t usually mix well, Chris has some reassuring news.

“There shouldn't be any danger for us to be in the marina with it.”

“You want to stop thinking of it as an electric fence underwater, and start thinking of it as cable, like when you charge your phone;” says Chris. “So you're fine to touch that cable, there's no issues [because] it's fully shielded from this outside environment.”

Electroclear have carried out 7 experiments lasting two months. The top row of panels shows various types of electric fields being tested, while the bottom row is, in each case, a paired control with no field. Towards the right hand end, the most recent trials show a big difference between the test (top) with no growth and the control with lots of marine fouling. Photo: Electroclear / University of Auckland

Chris says that one of the biggest challenges has been finding materials that can withstand the high voltage being passed through it, as well as the challenging marine environment.

“It's been quite a bit of experimenting to get something that operates as well as we need it to,” says Chris.

The first prototype were small tiles connected to a controller that could be managed via mobile phone.

They left paired sets of tiles of in a marina for several months; one tile was a control with no electrical field while the other was subject to the regular pulsing of the electrical field.

“It's very exciting to pull them out and actually see considerable difference,” says Chris.

Chris and Patrin have created a start-up company called Electroclear to continue the development of their idea. They are chosen some vinyl encapsulated cabling and high-density polyethylene that they are confident will withstand the rigours of the electrical current and which will enable them to radically scale up the size of their next experiments.

Listen to the podcast to hear more about the issues of marine biofouling and the Electroclear concept and experiments.

Chris Walker featured in an Our Changing World story on Taniwha - the human-powered submarine.