Kea get a helping hand

Harikoa is a young kea with a large coloured leg band that reads White J on Blue.

She is one of dozens of kea banded by the Kea Conservation Trust as part of a citizen science project to learn more about these endemic mountain parrots. 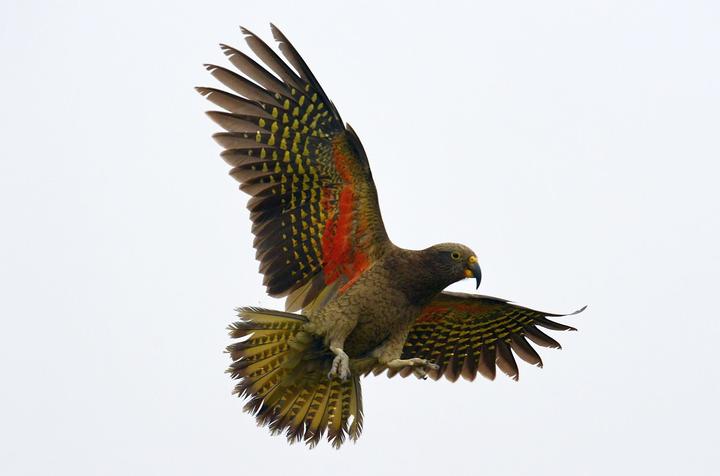 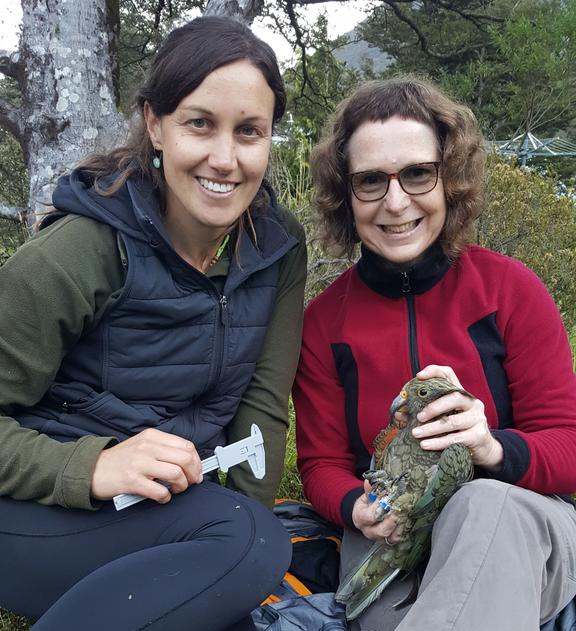 Like all kea, Harikoa is intelligent, playful and curious. These kea hallmarks have helped the species survive in the forests and alpine areas of the South Island.

But increasingly, these characteristics are getting them into trouble.

Harikoa was banded in late March in the little village of Arthur’s Pass, which nestles along a major highway in the middle of a national park.

She was one of five kea banded during a hectic evening and early morning of work by ecologist Dr Laura Young from the Kea Conservation Trust and a team of local volunteers from the Arthur’s Pass Wildlife Trust.

The youngsters are part of a much larger group of kea which spend a lot of time hanging around the village.

“They get together and play, and learn from each other and from adults.” 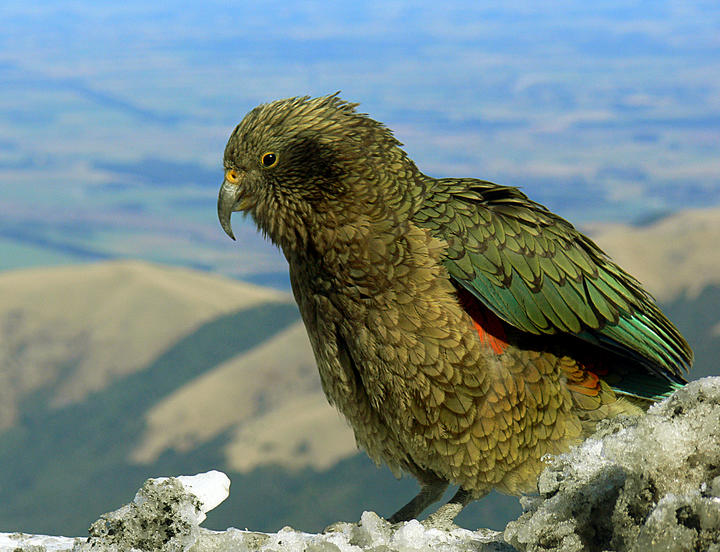 A young kea sits on snow at the edge of a skifield carpark. Photo: CC0 1.0 Bernard Spragg 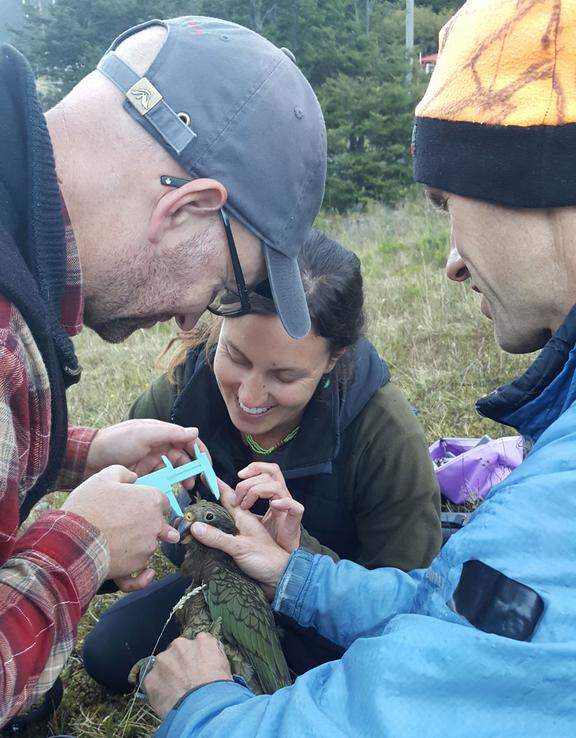 The problem, says Laura, is that curiosity and proximity to people is killing kea. Road accidents and lead poisoning are leading causes of death.

It all starts when people feed the kea.

Chocolate, for example, is fatal for kea (and for dogs, as well). But the problem is not always so direct.

To a kea, human food is the equivalent of junk food. It is high in calories but low in nutrients.

Instead of foraging for seeds and fruits in the wild, the well-fed kea start to hang around, waiting for the next hand-out.

And while they wait, they get into trouble.

“They get used to trying new things, and they just hang around here and try anything they can find,” says Pete.

As a result, kea find, play with and eat rubbish, especially bright plastic.

“When I did my PhD, I looked at their diet,” says Laura. “I looked specifically for seeds in the droppings, and I found a lot of bits of plastic and rubber and just horrendous stuff coming out the other side.” 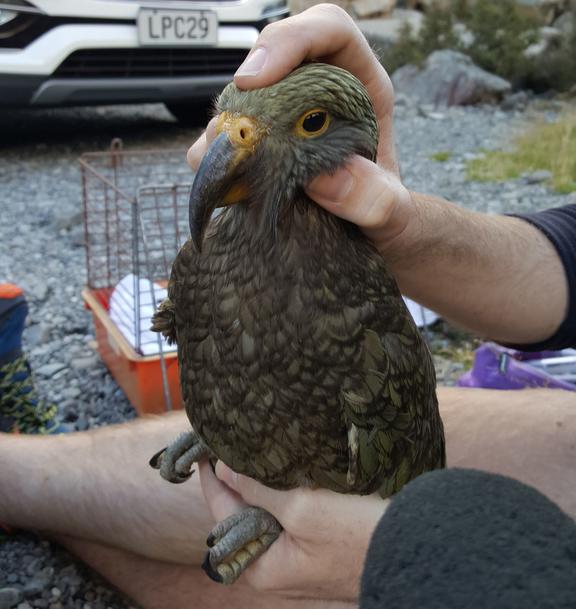 Yellow at the base of the bill and around the eyes mark this as a juvenile kea, just a few months old. Photo: RNZ / Alison Ballance

Kea often sit on the roofs of houses and back-country huts, chewing on sweet-tasting lead flashing and lead roofing nails.

There is a steady stream of cars and campervans pulling in, and kea fossicking around the carpark for food and rubbish are regularly runover.

Ten kea, at least, have been killed by traffic at Arthur’s Pass in the past few years.

One kea that survived a serious road accident followed by many weeks of treatment and rehabilitation is a familiar visitor at Death’s Corner.

As a result of his injuries Tuhura (Yellow G on Black) now has only one eye, but Kea Sightings database volunteer George Moon says that he seems to be thriving despite his impaired vision. 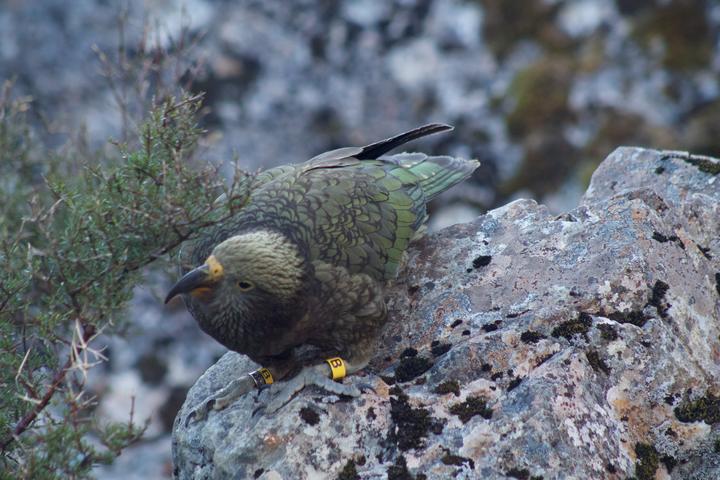 There are now prominent signs posted at known kea hotspots, urging people to not feed them.

Abd Laura is hoping that the kea sightings project will provide an alternative way for people to engage with kea, rather than feed them.

“Basically harnessing that enthusiasm and excitement that the public seem to have about kea, and using that to capture really interesting scientific information about kea numbers, population and things like how far they travel,” says Laura.

The Kea Conservation Trust is encouraging people to report sightings of banded kea to the Kea Sightings Database, which has more than 3000 kea sightings to date.

“The point of these plastic bands,” says Laura, “is it’s really easy to identify individual birds.”

“It enables us to keep an eye on who’s where, and we get reportings of kea that haven’t been seen in years, and it’s good to see that they’re still out there,” says George. 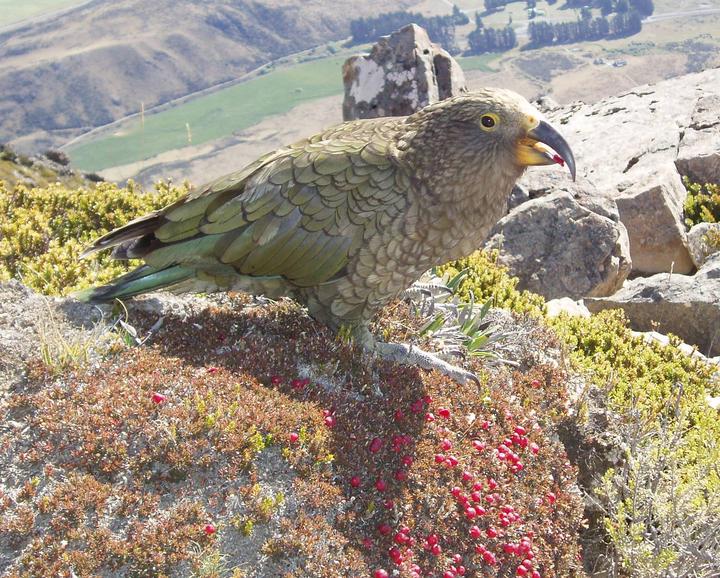 Laura and the Kea Conservation Trust are currently running a project to test lead levels in kea. They take a small blood sample when a bird is caught for banding at sites such as Milford Sound, Homer Tunnel, Franz Josef Glacier, Aoraki /Mount Cook and Arthur’s Pass.

Birds known to be suffering from lead poisoning are taken to the South Island Wildlife Hospital for chelation treatment, and a number have been successfully returned to the wild.

The Department of Conservation and local conservation groups such as the Arthur’s Pass Wildlife Trust are running programmes to remove lead from roofs in settlements such as Arthur’s pass and Aoraki / Mount Cook Village, as well as from back-country huts. 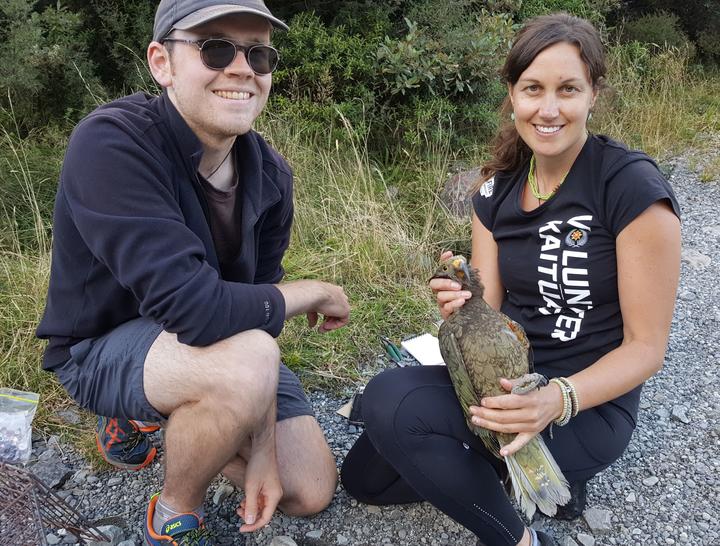 George Moon and Laura Young, from the Kea Conservation Trust, after banding a young kea with a plastic leg band that reads Black B on Yellow. The kea has been named Whakamatemate or curiosity Photo: RNZ / Alison Ballance 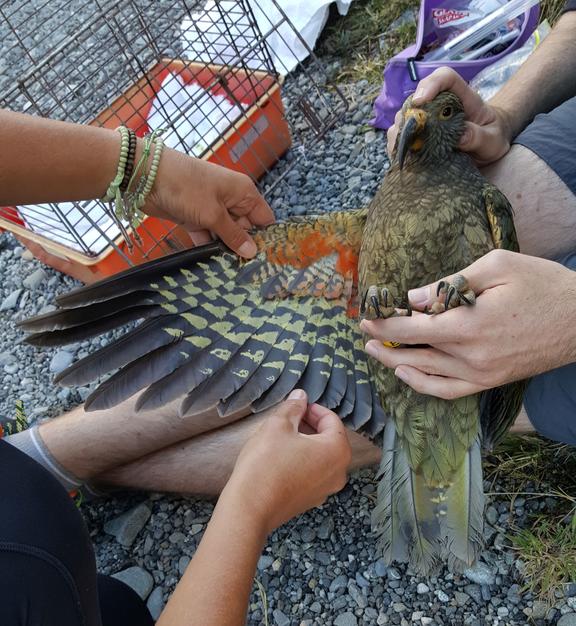 Harikoa and four other kea were banded while Our Changing World was recording this story at Arthur’s Pass, in late March 2019, and the names were suggested by producer Alison Ballance.

Taiao is an adult female (Black F on Light Blue). ‘Taiao refers to nature or the environment. Kea are an integral part of New Zealand's environment, and the mountains and forests of Te Wai Pounamu - the South Island. The unmistakable call of the kea defines wild nature.’

Whakamatemate is a fledgling male (Black B on Yellow). ‘Whakamatemate means curiosity or inquisitiveness in te reo Māori. Anyone who has ever met a kea knows they are super curious about everything. Their curiosity and intelligence are why they do so well from the alpine zone down to the coast - but it's also one of the reasons they can get into trouble. They're like toddlers who put everything in their mouths to check it out - which is a bad idea when it is a lead roofing nail!’ 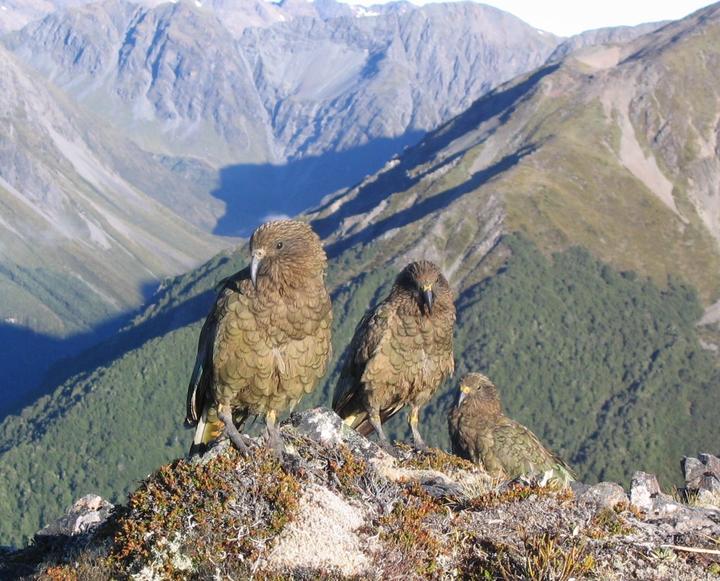 Kea are found from the coast to the alpine zone, and spend a lot of time in the forest. They nest on the forest floor. Photo: Laura Young / Kea Conservation Trust