Lava Lab and drilling into a volcano's magma chamber

It’s been about six million years since lava poured out of a volcano in Christchurch, but now a multi-disciplinary team at the University of Canterbury is creating lava in the city - on demand - in the Lava Lab. 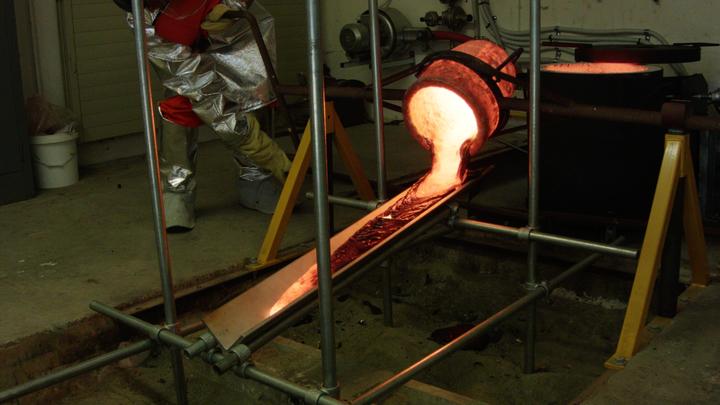 Molten lava pouring out the crucible down the tilted metal plate and beginning to cool down. Photo: University of Canterbury

Volcanologist Ben Kennedy is part of a University of Canterbury team, led by mechanical engineer Mathieu Sellier, that has a Marsden grant to study the fluid dynamics of lava.

Traditionally, scientists have observed lava during volcanic eruptions, but it is dangerous work, and by the time the scientists observe the molten rock it is already beginning to cool and change.

The Lava Lab, situated in an unused metal foundry in the University’s School of Fine Arts, allows the scientists to create lava and record its behaviour in intimate detail. 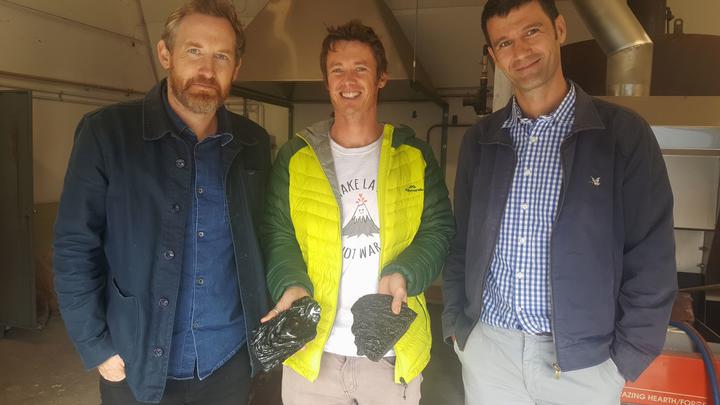 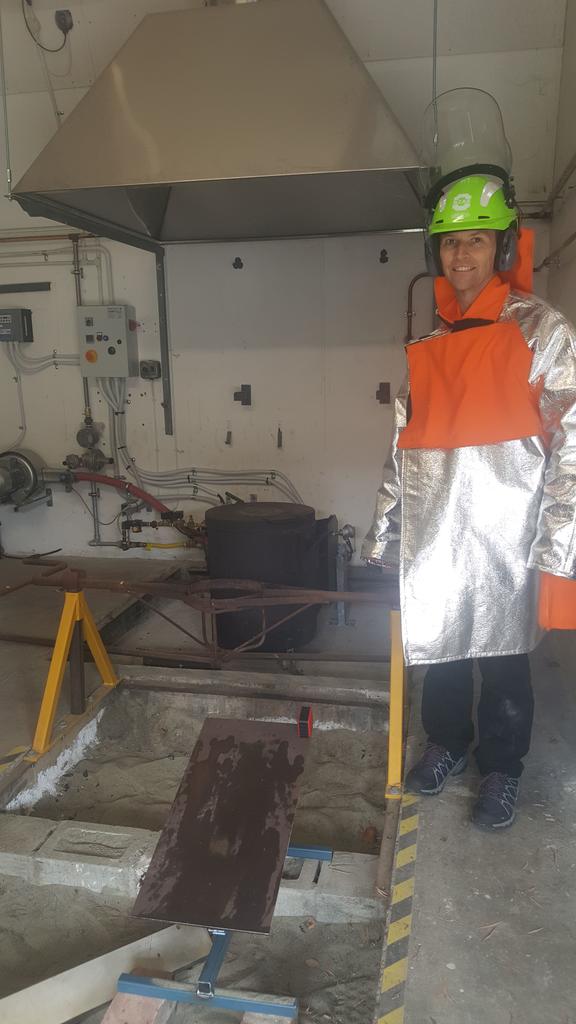 PhD student Dale Cusack is the experimental volcanologist who cooks up the lava. He has previously modelled lava using golden syrup as an analogue. Golden syrup, like toothpaste and lava is a non-Newtonian fluid with quite different properties to a fluid like water.

Dale uses bags of scoria from a local hardware store and applies temperatures of up to 1400ºC for four hours in a crucible that was once used to melt metal.

Dale wears a Kevlar suit, helmet and visor to protect himself from the intense heat generated by the furnace. He says it is still incredibly hot work, despite the protection, and he can ‘feel’ the deep noise generated as the melting rock swirls in the crucible.

After the hours of preparation, the team has just a couple of minutes to pour the molten lava down an inclined metal plate before it cools and solidifies. Every detail of the process is captured by highspeed thermal imaging and temperature sensors.

Mathieu will take the data and apply it to a fluid dynamic model he is developing with the aim of better predicting where lave will flow during an eruption.

“It will be extremely useful for monitoring lava flows in Hawaii,” says Ben Kennedy. “It will help us prepare for future lava flow events that will one day affect Auckland.”

Ben says it is difficult to predict where lava will flow, as its properties change so fast. Even as the crust cools on contact to air, lava inside the crust continues to flow, creating pipes and tunnels. Solidifying lava becomes a barrier that redirects the flow of the moving mass.

Mathieu says that ultimately he would like to take the model and apply it to real-life lava flows to see if it can better predict the behaviour of the flow. 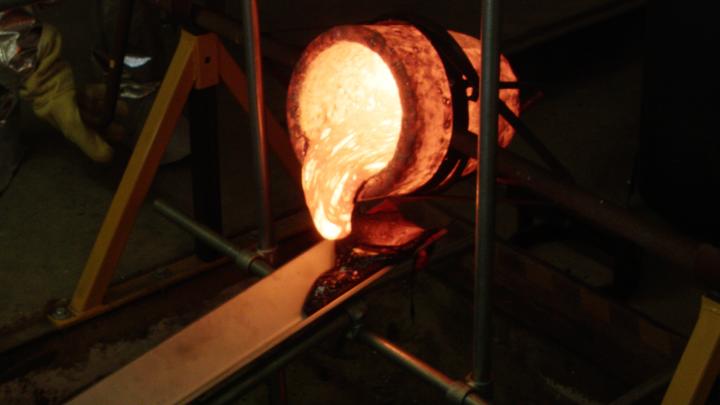 Molten lava starting to pour out of the crucible in the Lava Lab. Photo: University of Canterbury

Drilling into a volcano

Magma. Lava. They’re both molten rock, but the difference lies in their location. 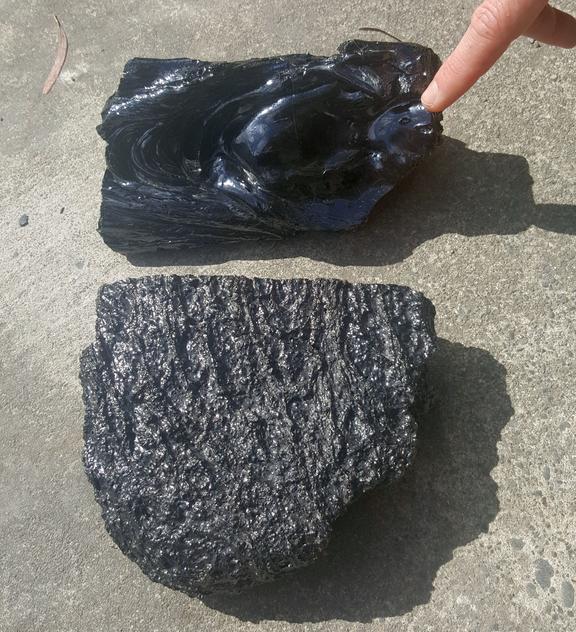 A piece of lava poured in the Lava Lab and a piece of real lava cut out of a Hawaiian lava flow. Photo: RNZ / Alison Ballance

Magma is trapped underground, in the earth’s crust, while lava is magma that makes its way to the surface via a volcanic vent, where it keeps flowing until it cools and hardens.

Ben Kennedy says that while you can learn a lot from lava, and the way it behaves at the surface, the final frontier of the earth’s crust is magma. And it turns out that we know extremely little about molten magma.

Ben says we don’t even know what a magma chamber under a volcano looks like. Is it like a balloon filled with molten magma? Or does the magma squeeze into gaps and spaces in fractured rock? We know that immense temperatures and pressures are involved, but we have never measured these directly.

Ben would like New Zealand to be part of an international project to drill into the magma chamber of the Krafla Caldera, in Iceland. The idea to drill into an active volcano and establish an International Magma Observatory is the brainchild of John Eichelberger. He’s an emeritus professor at the University of Alaska Fairbanks, in the United States, and was in the country recently to talk with Ben and other geologists.

Ben and John say that this would be the first attempt to deliberately drill into a magma chamber, although geothermal companies have accidentally reached magma as they drill.

Exploring volcanoes in the classroom

Ben has been exploring the idea of drilling into a volcano in the classroom. He got funding for a hi-tech game, called Magma Drillers Save Planet Earth from the Unlocking Curious Minds fund.

The Curious Minds fund, managed by the Ministry for Business Innovation and Employment, supports projects that excite and engage New Zealanders who have fewer opportunities to experience and connect with science and technology. 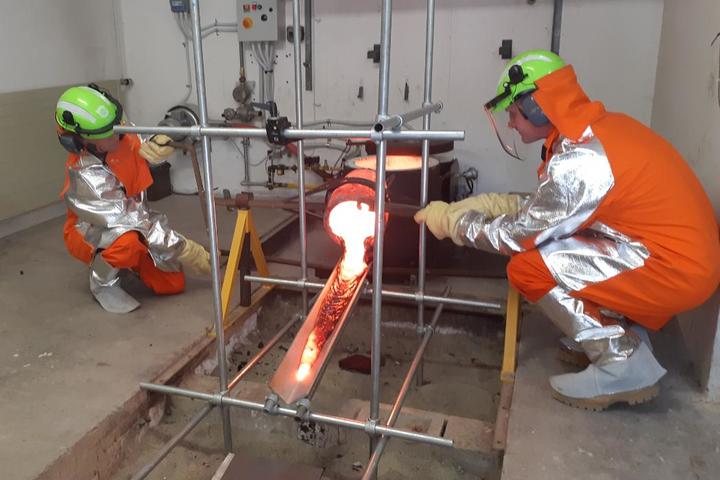