Caves are subterranean libraries. They hold records of past climate change, captured in stunning cave formations such as flowstones and stalagmites. 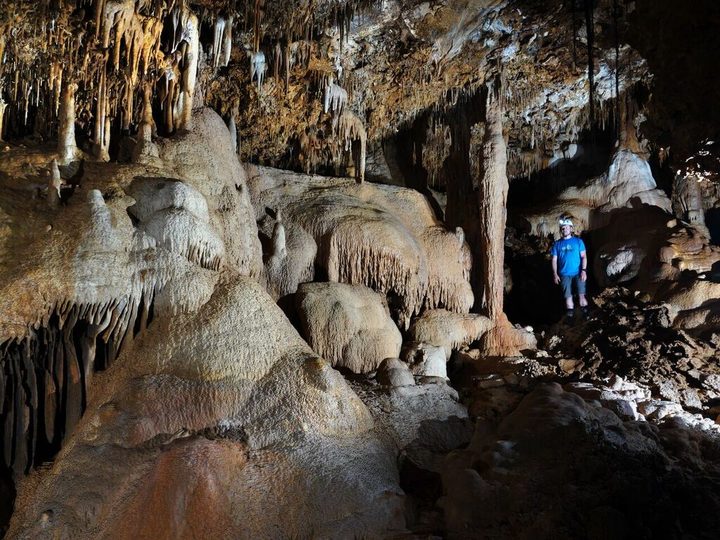 Adam Hartland in a cave filled with speleothems such as stalactites, stalagmites and flowstones, all of which hold records of past climate. Photo: Adam Hartland / Waikato University

Limestone is a feature of many places in New Zealand. The King Country, North Otago, Northwest Nelson and Fiordland’s Kepler Mountains, to name just a few.

Where there is limestone there are caves – and these secret subterranean worlds hold a fascination for geochemist and Rutherford Discovery Fellow Adam Hartland, at the University of Waikato.

“I think there’s something really interesting about these hidden realms or environments which you don’t really think about,” says Adam “They’re cryptic, but they’re fascinating because of that.”

Adam regards caves as libraries of past climates.

He says that the whole cave is a climate record. This includes, firstly, the formation of the cave and its development, as well as the sediments or speleothems that build up within the cave over time. “That builds up a continuous record of climate,” says Adam.

A speleothem is anything that is a deposit in a cave. Adam says that they are known as secondary deposits.

“Rainwater trickles through the soil and picks up CO2, which makes it acidic,” says Adam. “That water dissolves some of the [primary limestone] bedrock, eventually gets down into the cave and deposits the carbonates that are the speleothems.”

Speleothems include the familiar stalactites and stalagmites, as well as the flowstones which interest Adam and PhD student Andrew Pearson. Flowstones grow from a flowing film of water along the floor or side of a cave. 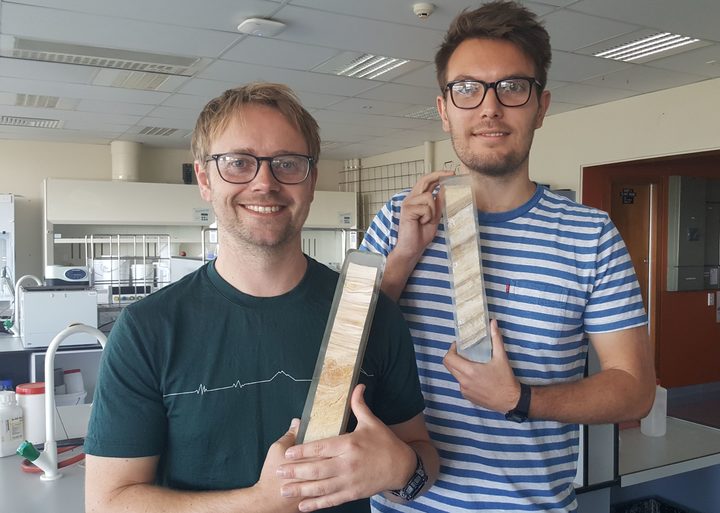 Adam and Andrew visit the Waitomo Caves about once a month to collect baseline measurements from the caves. They are particularly interested in drip water percolating down through the soil above.

Andrew’s research focuses on understanding how the carbon cycle in the soil has been affected by different past climates.

He says that the thin layers of carbonates and organic materials that build up in the flowstones are a record of what was happening in the soil above at that point in time. These layers can be dated and analysed to build up a record going back in time.

“The water passes through the soil, carries the organic material with it and then it is locked into the rock and preserved in time,” says Andrew. “They’re like molecular fossils of what’s been happening in the soil.” 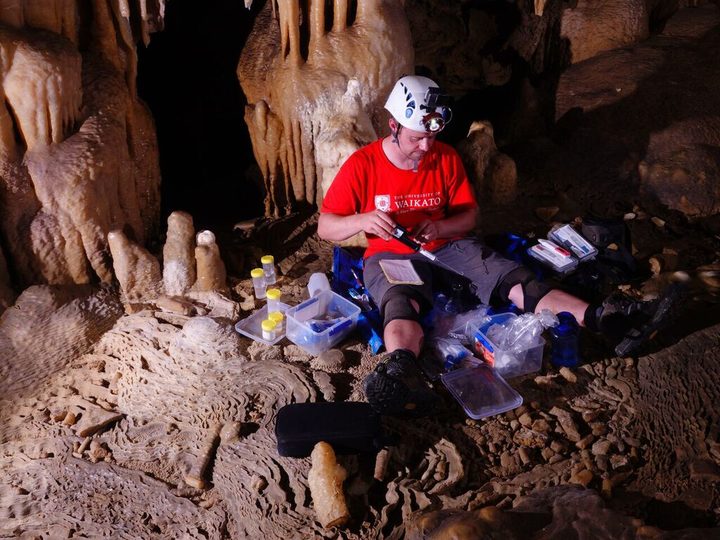 The pair have collected blocks of speleothems from the caves which they then analyse back in the lab. A cross-section of flowstone is marbled with lines of caramel-coloured calcium carbonate interspersed with darker lines of organic material, which represent events such as floods during the cave’s history.

“A lot of people work on how soils will respond to climate change,” says Adam. This includes the potential of soils to release carbon dioxide to the atmosphere, “but also there’s material lost from the soil by leaching organic material out of the soil.”

Adam says that caves are the only sort of archive that captures this process over long periods of time.

Andrew says that the speleothems he is looking at go back about 14,000 years, and by studying them carefully he can get information that covers periods of about 50 years.

“This will give us a really good idea of how the climate is driving the loss of organic carbon from the soil pre-human,” says Andrew. He says data from New Zealand is unique because humans have only been here for 750-or-so years, so we can get insights into whether carbon loss from soils results from human impacts or natural processes.

To find out more about the techniques that Andrew and Adam use to study caves, and to hear about their artificial cave, listen to the full story. 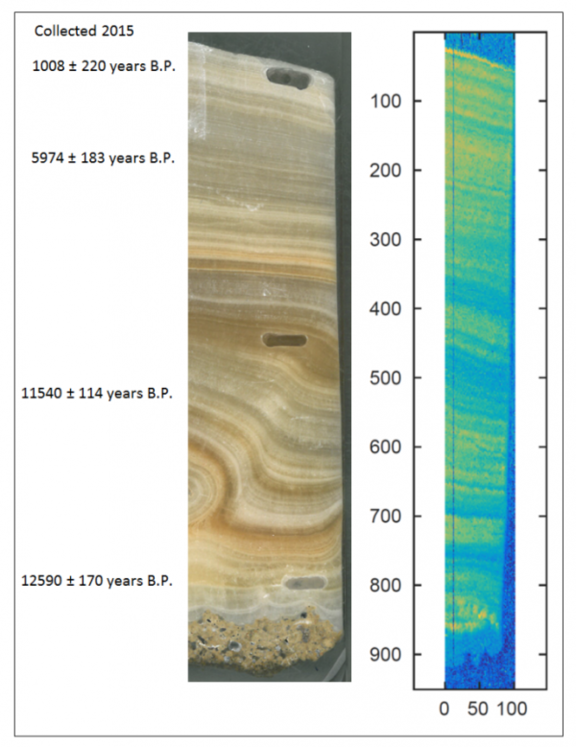 Here is Adam's explanation of the flowstone illustrated to the right.

“Flowstone sample HC-15-2 from Hodges Creek cave, Kahurangi National Park. The core covers the entire Holocene (the current interglacial warm period, also known as MIS 1), which began around 11,700 years ago. It intersects periods of warm and cool conditions and provides a test of the climatic controls on soil carbon export. The right panel shows a laser-induced fluorescence map of part of the same sample completed by Yves Perette at the EDYTEM research group, Université Savoie Mont Blanc, France. The map reveals intervals of higher organic fluorescence indicating periods of greater soil carbon efflux to groundwater (Y-axis is depth in mm, colour intensity scales with organic carbon fluorescence in arbitrary units).” (This information and figure were sourced from an article by Adam Hartland titled ‘Beyond palaeoclimate: new horizons for cave science’, published on the Royal Society Te Apārangi website).