In many places around New Zealand, there is evidence of coastlines that have been dramatically thrust upwards by tectonic activity. Marine life quickly recolonises the bare rock – but where does it come from?

New research from the University of Otago shows that in the case of bull kelp it may be floating kelp from a distant source that recolonises newly bare coast, rather than local kelp. 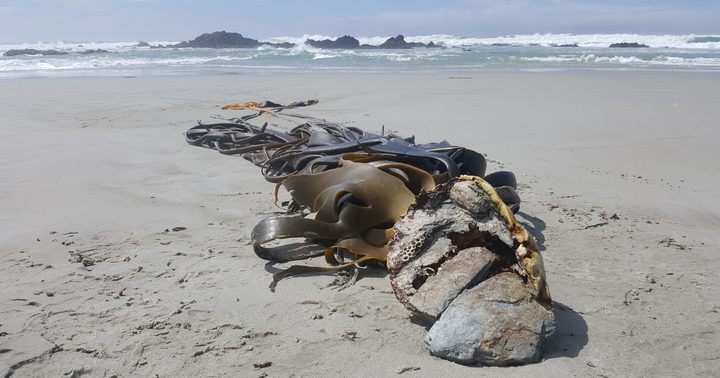 This bull kelp holdfast contains local rocks, but sometimes rocks are moved hundreds of kilometres from their source as they raft with the kelp. The offshore rocks in the background mark the uplifted edge of a fault. Photo: RNZ / Alison Ballance

The famous raised coastlines at Cape Turakirae near Wellington are a classic example of tectonic uplift, as is Wellington airport and the surrounding suburbs of Rongotai and Kilbirnie. These were last uplifted in 1855 when a magnitude 8 earthquake on the Wairarapa Fault raised the beach 2.5 metres at Turakirae Head, with 1.7 metres occurring in Wellington Harbour.

Most recently, parts of the Kaikōura coast were suddenly uplifted by several metres, and in some case more than six metres, during the magnitude 7.8 Kaikōura earthquake in November 2016.

In both these cases, the uplift was sudden, but in other places geologists are not so sure. There has been uplift, but did it happen at once or did it happen slowly over time?

Emeritus Professor Dave Craw, a geologist at the University of Otago, has been pondering this question on the Akatore Fault, south of Dunedin.

In 2017, geologists dug a trench to study the active fault, which runs onshore for about 20 kilometres between Taieri Mouth and Toko Mouth, and continues offshore.

The research found signs of three significant earthquakes on the fault in the past 12,000 years, with the most recent occurring about 1000 years ago. In each case, Dave says, there was several metres of uplift.

Dave says that the recent uplift is clearly visible from the beach. Taieri Island, for example “is there because it is on the uplifted side of the fault.”

He says that south of Taieri Mouth there has been a total of about 60 metres of uplift over the last 100,000 years. 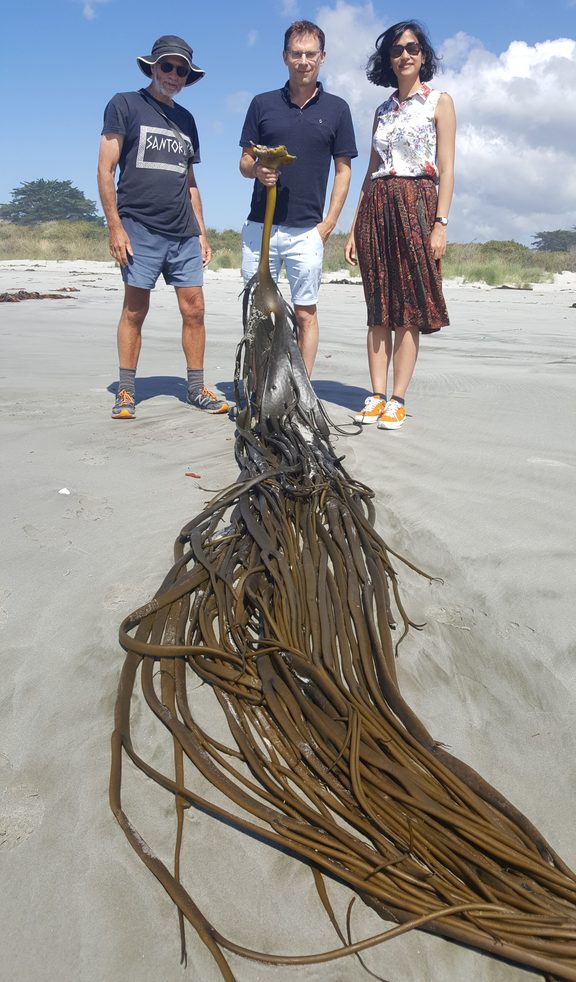 Dave has been collaborating for many years with biologist Professor Jon Waters. Their previous work has looked at the evolution of freshwater fish species in response to tectonic activity altering river courses.

Jon has also been studying bull kelp, and following the sudden die-off of bull kelp on uplifted areas of coast around Kaikoura he began to wonder what kelp would recolonise the newly bare rock.

Jon speculated that recolonising kelp might not necessarily come from adjacent areas.

Bull kelp is one of the great ocean wanderers. The buoyant kelp breaks off during storms and it has been estimated that up to 70 million kelp rafts at any one time are floating around the Southern Ocean. It can float for many hundreds and even thousands of kilometres, and remain capable of spawning baby kelp plants.

On hearing about the Akatore Fault from Dave, Jon decided it would be a suitable site to look at the genetic signature of kelp growing in the uplifted zone and in adjacent areas.

“In our wildest dreams,” says Jon, “we thought there’d be something interesting there, but we had no real expectation.”

PhD student Elahe Parvisi carried out the genetic work, and what she found surprised them all.

“Hey presto,” says Jon. “It’s a dramatic difference between the uplifted stretches versus the stretches of coast that weren’t uplifted.”

“We can still see a striking genetic signature of that change that happened a thousand years ago,” says Jon, who is excited by how persistent the signature has been over that time.

It is convincing evidence that in this case, at least, the uplift occurred at once and that the subsequent kelp settlement happened simultaneously across the newly bare area.

Jon, Elahe and Dave say they plan to carry on with the work and look at other areas around New Zealand where tectonic uplift has occurred at the coast to see how long such genetic signatures might persist. 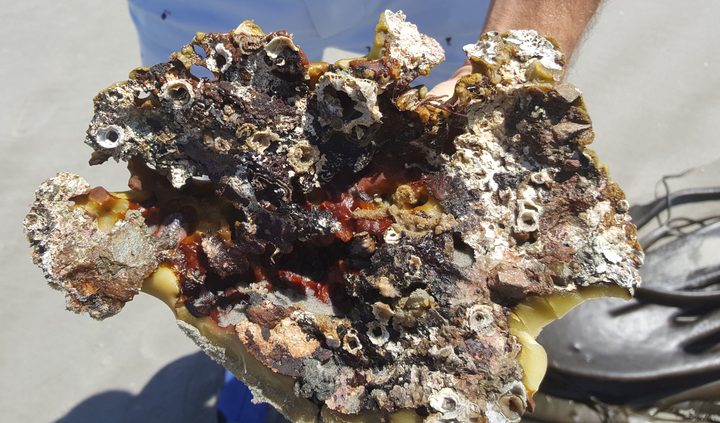 Communities of animals find a home in the holdfasts of bull kelp, including specialised chitons that live only there. When the bull kelp breaks off the holdfast community travels with it. Photo: RNZ / Alison Ballance

The research was published in Nature Geoscience in 2015

Jon Waters has featured in a number of stories about ancient DNA revealing previously unrecognised species of sealion and penguins that were hunted to extinction by Māori.