A rare native frog is thriving, thanks to 15 years of sustained rat control in its forest home. 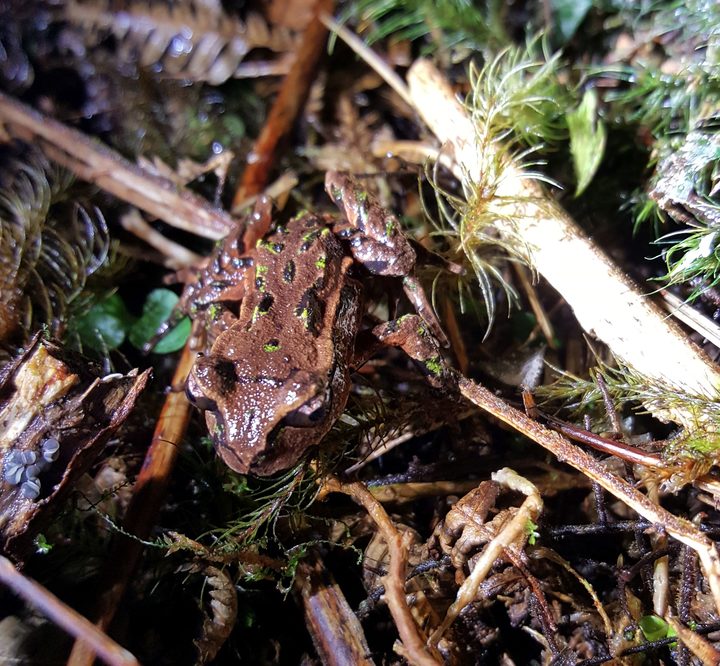 Archey's frogs are very small. A large frog like this might weigh a bit more than 4 grams, while young ones can weigh in at just 0.1 gram. Photo: RNZ / Alison Ballance 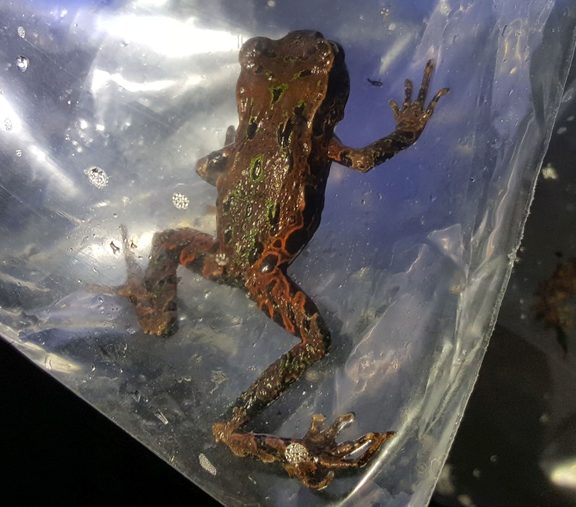 Archey's frogs come in a variety of colours, including brown, green and even orange, with gold flecking. Photo: RNZ / Alison Ballance

New Zealand is home to four species of small native Leiopelma frogs – two in the North Island, and one species on each of Maud and Stephens islands.

Archey’s frog is the smallest species and has the dubious distinction of being an EDGE species. It is, in fact, the world’s most Evolutionarily Distinct and Globally Endangered amphibian species. It is found on the Coromandel Peninsula and in the Whareorino Forest in the King Country, west of Te Kuiti.

There is a small translocated population in Pureora Forest.

Archey's frogs have no external ears, no croak and no tadpoles. The baby froglets climb onto their dad’s back and he looks after them until they’re big enough to be independent. 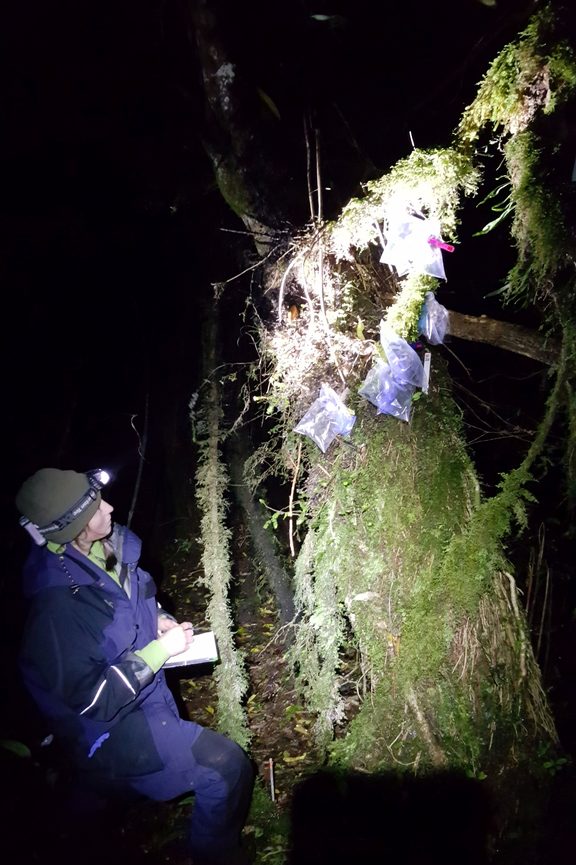 Leigh Roderick searches by torchlight in the frog study area. As she catches a frog she puts it in a plastic bag and hangs it in a tree to keep it safe. Photo: RNZ / Alison Ballance

The Whareorino Forest is a mid altitude forest with a high rainfall, which suits the forest-dwelling frog.

There are two study sites, in the northern and southern halves of the frog area. These are a 10 by 10 metre grid, which is searched thoroughly over four nights, once a year.

The searchers move very slowly, scanning the ground before they step. They carefully search in and under every plant, and scan up to two metres above the ground. Archey’s frogs are proficient climbers and tend to move up during the night, before returning to the ground to hide during the day.

Each Archey's frog found in the study grid is handled with a set of gloves and temporarily held in a plastic bag. The gloves and bag are used only for that frog, to prevent disease transmission.

Bags containing frogs are pegged in trees to keep them out of harm's way while the grid is being searched. Once the search is complete all the frogs are gathered up and taken to the hut to be processed. 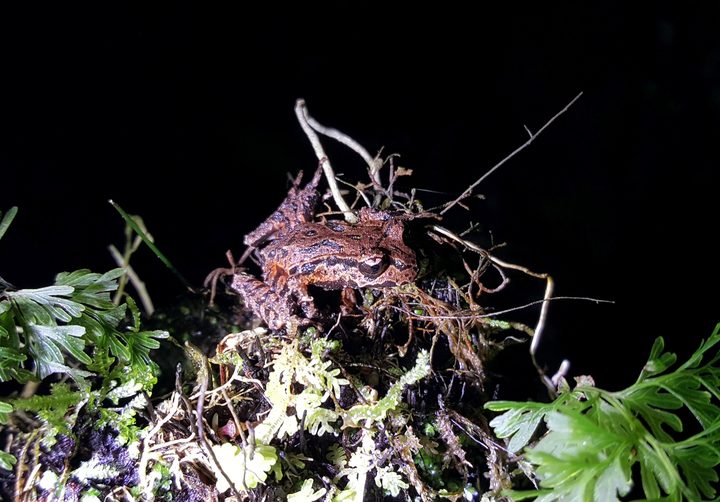 Archey's frogs hide under rocks and plants on the forest floor during the day. At night they often climb up trees and bushes in search of prey, before returning to the ground by dawn. Photo: RNZ / Alison Ballance 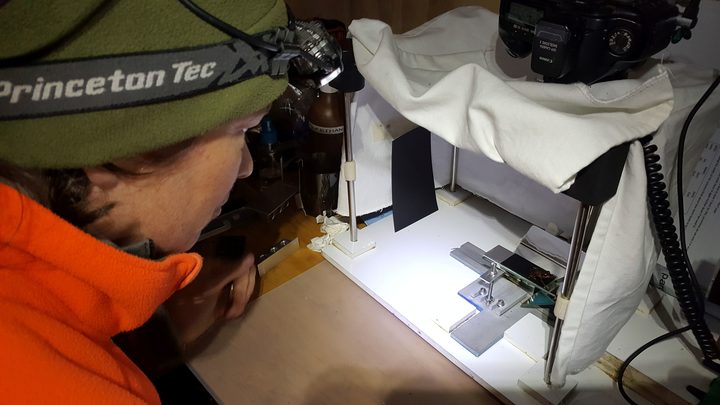 DOC ranger Abi Quinnell using a camera stage to take identification photos of Archey's frogs - the very small frog is just visible on the black rectangle to the right of the photo. Photo: RNZ / Alison Ballance 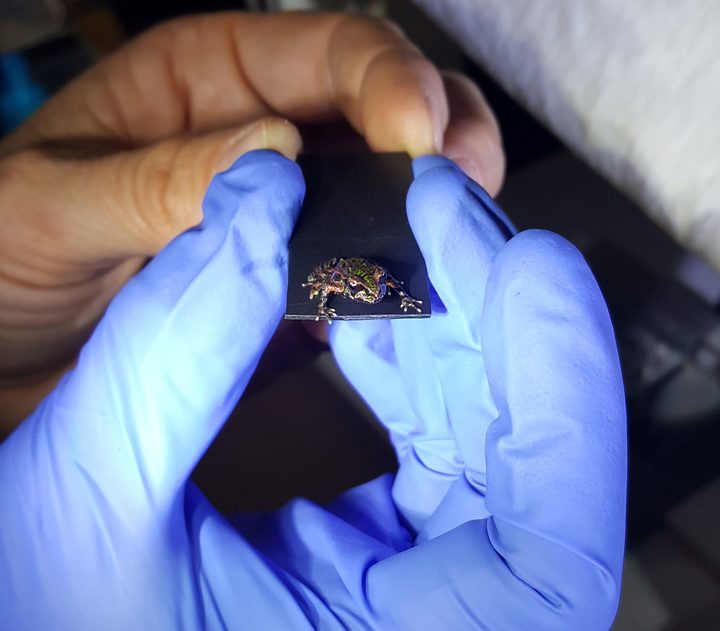 A very small Archey's frog, weighing just 0.1 gram is positioned on a slide before having its photo taken. Photo: RNZ / Alison Ballance

Each frog is photographed using a mirror stage, which takes a single picture that includes the frog’s back, face and sides. The pattern of black markings above the eyes are interpreted as a unique code to identify individuals. The frog is also weighed and measured.

The information for each frog is entered into a database, that can be statistically analysed to show population trends over time. It can also show how individuals grow as they are recaptured in different years. 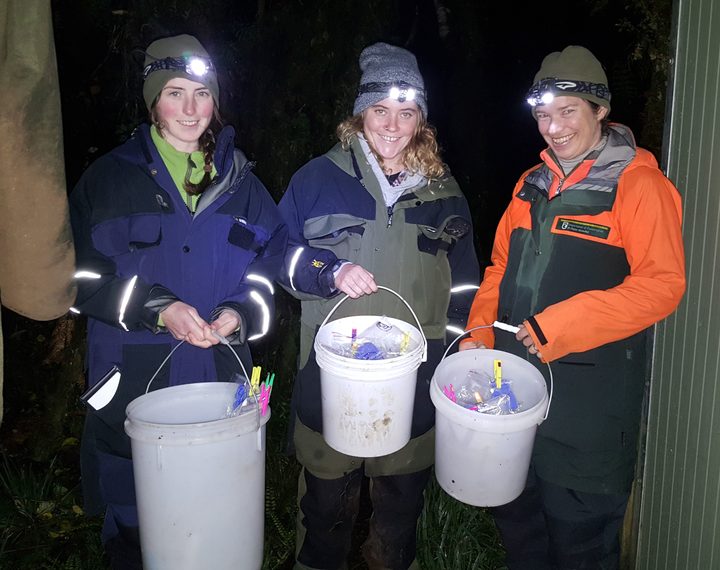 Leigh Roderick, Gabby Keating and Abi Quinnell, at two o'clock in the morning, about to return 40 frogs (in plastic bags in the buckets) to the exact spot they were collected from. Photo: RNZ / Alison Ballance

Rat control has been carried out in the northern half of the Whareorino frog area using poison bait since the 1980s. The southern half was not baited and was used as a comparison. 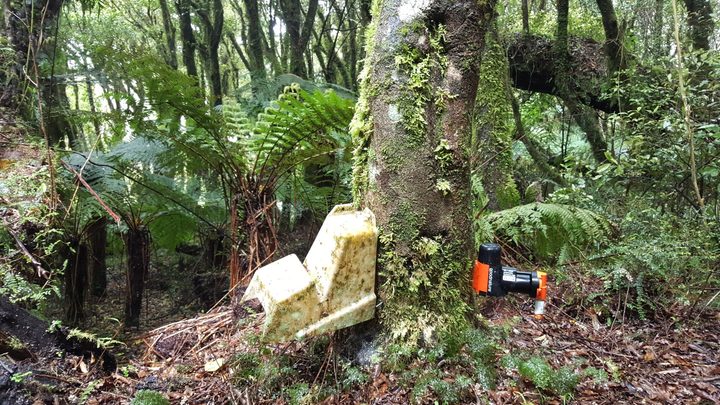 Rats in the Whareorino frog area have been controlled using poison bait delivered in white plastic bait stations since the early 2000s. In 2018 they were replaced with self resetting Goodnature A24 rat traps. Photo: RNZ / Alison Ballance

The baiting has been very successful. Rat numbers in the northern area are so low they are undetectable, while the frog population has increased in numbers and expanded in range. In the southern area, meanwhile, frog numbers were stable or even declining.

The rat control programme has now been expanded to include the whole frog area, and there has been a switch from using poison bait to using self-resetting rat traps. The much larger area of rat control is possible because the Goodnature A24 rat traps only need to be serviced twice a year, whereas bait stations had to be refilled every two months. 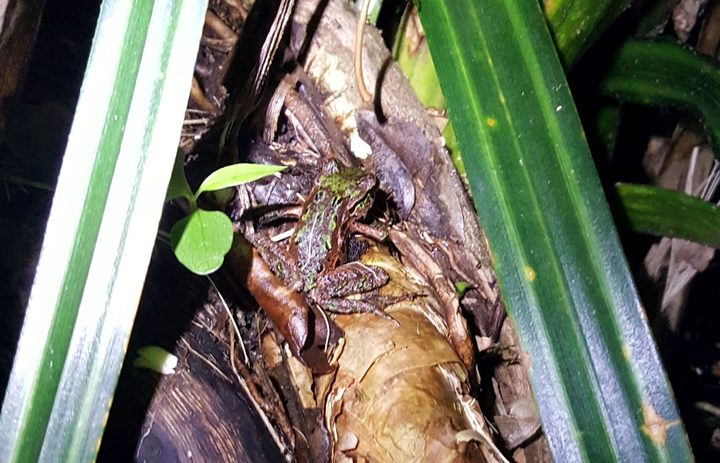 This frog has moved up into a kiekie bush to hunt for insects. Photo: RNZ / Alison Ballance

Auckland Zoo has a captive breeding population of Archey's frogs.

Ben Bell has been surveying Archey's frogs in the Coromandel Peninsula for more than 35 years, and in an interview for Our Changing World Alison Ballance joins him in the field. 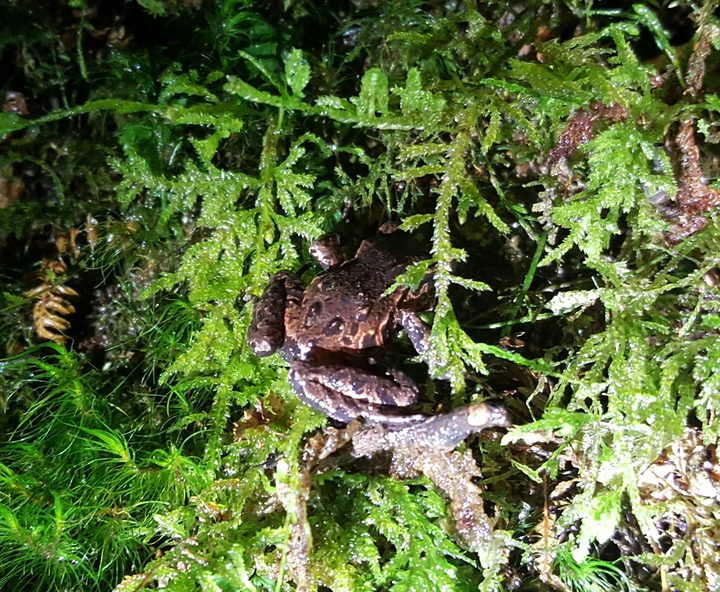 Archey's frogs are sit and wait predators - they can remain stationary for hours at a time. Photo: RNZ / Alison Ballance